There could be massive fallout from the FBI’s raid of former President Trump’s home on Monday.

An FBI investigation into whether Trump took classified records from the White House to his Florida mansion led to the search of Trump’s estate.

The investigation stemmed from the National Archives’ desire for Trump to turn over various White House materials upon leaving office, and it had requested an investigation by the Justice Department.

It follows the announcement earlier this year that the National Archives and Records Administration (NARA) had received 15 boxes with White House records, including classified records from Mar-a-Lago.

A raid of a former president’s home has never taken place before in history. Trump’s supporters, and even some Democrats are up in arms over what is clearly a political attack.

Kentucky Sen. Rand Paul called on the FBI and Justice Department to investigate the raid on President Trump’s Florida home. As Paul stated on “Fox & Friends,” if an investigation found that Attorney General Merrick Garland misused his authority, he could be impeached.

Without question, I think the order to allow the raid on Mar-a-Lago on Trump’s house has to be revealed.

I think we have to know under what pretense they think this is right? I think it’s going to have to wait until November till there’s a full investigation. And I’ve never been a fan of overusing impeachment, but I think there has to be an investigation.

And if it warrants it, there’s going to have to be a look at whether or not the attorney general has misused his office for political purposes. Have they gone after a political opponent? I mean, this is beyond the pale.

Now, this is really something that’s going to require an investigation. And I wouldn’t be surprised if the investigation leads to abuse of power that this could even lead to an impeachment of the attorney general.

Bruce Reinhart represented a number of employees working for Epstein before he sanctioned yesterday’s ‘unannounced’ search of Trump’s Mar a Lago home.

Almost a decade ago, he left the local US Attorney’s office to assist Epstein’s staff members, including his pilots and scheduler.

The magistrate judge had been appointed four years prior following a decade in the private sector with Epstein’s staff.

It was he who helped Nadia Marcinkova, who Epstein called “his Yugoslavian sex slave”, scheduler Sarah Kellen, and the pedophile’s pilots.

In 2008, he left his job at the US Attorney’s Office of South Florida and began working with Epstein’s employees on Jan. 1.

It states in his official biography that he ‘managed a docket that covered the full spectrum of federal crimes, including narcotics, violent crimes, public corruption, financial frauds, child pornography and immigration’.

According to a new account of the Monday operation at Mar-a-Lago, Eric Trump revealed that FBI agents refused to hand over the search warrant for the property raid, as well as going into parts of the property they shouldn’t have been in.

The FBI would not give Trump’s lawyer, Christina Bobb, a copy of the search warrant, but “showed it to her from about 10 feet away,” according to Eric. Additionally, he said he would be “thrilled” to learn whether the search was justified.

A copy of the warrant was given to Bobb by the police, she told The New York Times a day earlier, though.

As of now, Bobb said the supporting documents for the warrant are sealed, but Trump’s team has yet to decide whether to take the case to court so they can see the justification for the raid.

“It was very, I would say, thin, and as you can tell, it went from public records,” Bobb said in an interview with Real America’s Voice on Tuesday. “The affidavit, the supporting documentation of what the probable cause was to obtain the warrant, has been sealed, so we’re not allowed to see that. We have to go to court to request the judge to release that, which may or may not happen.”

In an interview with Daily Mail, the former president’s son said the 30 agents who arrived at the property requested that the cameras be turned off – but the staff refused.

Since the security cameras weren’t turned off, Eric says he has proof the FBI raided areas of the property where they ‘shouldn’t have been.’

Additionally, the attorney was forced to wait at the edge of the driveway when the search took place inside. They broke into the safe with safe crackers, he said.

‘There’s 30 agents there,’ he recalled on Monday during a call with the Mail. ‘They told our lawyer… you have to leave the property right now. Turn off all security cameras.’

He stated that “In early June, the DOJ and FBI asked my legal representatives to put an extra lock on the door leading to the place where boxes were stored in Mar-a-Lago – We agreed.”

They were shown the secured area, and the boxes themselves. Then on Monday, without notification or warning, an army of agents broke into Mar-a-Lago, went to the same storage area, and ripped open the lock that they had asked to be installed. A surprise attack, POLITICS, and all the while our Country is going to HELL! 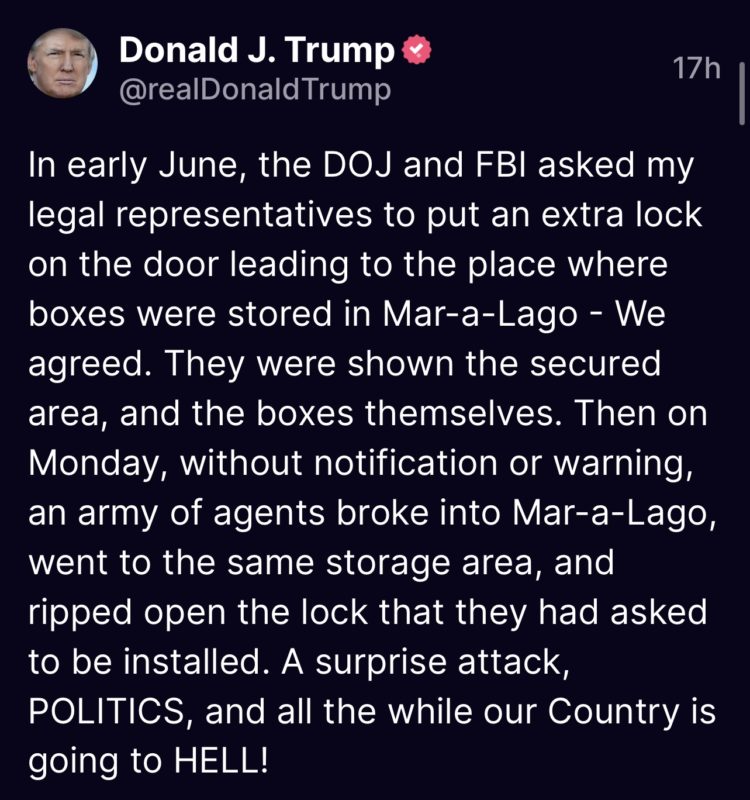 Trump said in a post to his Truth Social page early Wednesday morning, “The FBI and others from the Federal Government would not let anyone, including my lawyers, be anywhere near the areas that were rummaged and otherwise looked at during the raid on Mar-a-Lago. Everyone was asked to leave the premises, they wanted to be left alone, without any witnesses to see what they were doing, taking or, hopefully not, “planting.””

Trump asked: ‘Why did they STRONGLY insist on having nobody watching them, everybody out? Obama and Clinton were never ‘raided,’ despite big disputes!’ 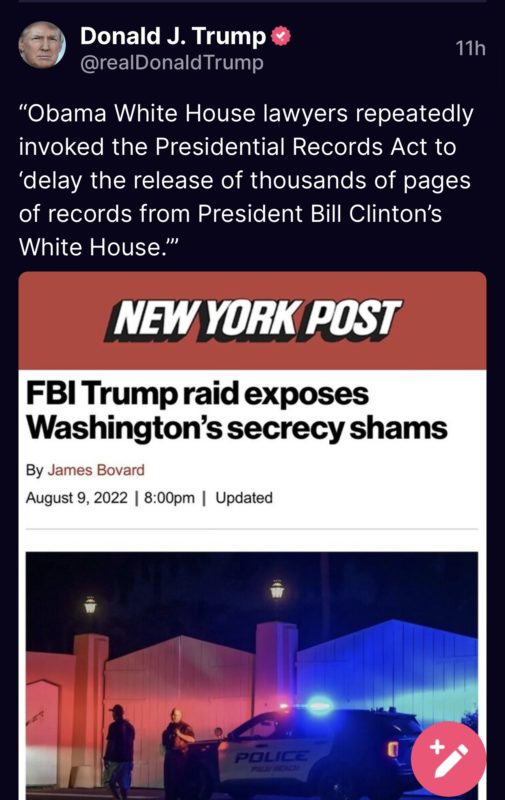 Trump continued with the quotes:

“At the end of his presidency, Barack Obama trucked 30 million pages of his administration’s records to Chicago, promising to digitize them and eventually put them online – a move that outraged historians. More than five years after Obama’s presidency ended, the National Archives webpage reveals that zero pages have been digitized and disclosed.“

Real America’s Voice on Tuesday quoted Trump’s lawyer Christina Bobb as saying the raid was a ‘weird flex’ and maybe something was planted by the FBI.

‘No, there is no security that something wasn’t planted,’ Bobb said. ‘I’m not saying that’s what they did.’

‘This was a completely unnecessary power flex. It was a weird flex,’ Bobb continued. ‘It’s quite honestly sad to see what they have done to our country.’