Home World USA Bad News For Biden: We Just Found Who He Wrote A College...

The corruption of the Biden family is worse than we thought.

We know this is a lie because of Hunter’s own emails and texts, which have been authenticated. Emails obtained by Fox News reveal that Joe Biden did a major favor to help Hunter’s business dealings with a Chinese executive whose son was hoping to attend a top university in the U.S.

In 2017, Joe Biden went to great lengths to write a college recommendation letter for the son of the Chinese executive.

Then-former Vice President Joe Biden backed the son of the Chinese executive who was looking to attend either Brown University, Cornell University, or New York University. Images have been obtained and placed below.

Li wrote to Hunter and his business associates: “Gentlmen [sic], please find the attached resume of my son, Chris Li. He is applying the following colleges for this year.”

Schwerin wrote, “Jonathan, Hunter asked me to send you a copy of the recommendation letter that he asked his father to write on behalf of Christopher for Brown University.”

“The original is being FedExed to Dr. Paxson directly at Brown,” Schwerin wrote. “It should be there by Tuesday at the latest (given Monday is a holiday here in the U.S.). Let us know if you have any questions. Best, Eric.”

Joe Biden used his power and influence to send the recommendation directly to the president of Brown University — Dr. Christina Paxson.

Li replied with excitement: “Hi Eric, Just see the email. It is just great! Thank you very much!”

Li also made sure to thank Hunter for getting his father’s help. “And Hunter, thank you very much too,” Li said. “All the best to you all.” Here’s the initial email: 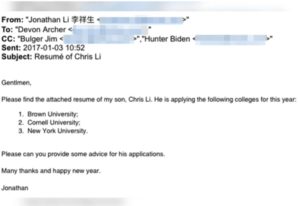 Here are the next two emails sent: 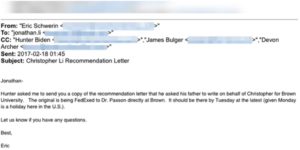 It is unclear if Li’s son was admitted to Brown University and whether he attended. The emails originated from a laptop said to belong to Hunter Biden.

Hunter has received large wire transfers for his business dealings in China.

Hunter Biden is currently under federal investigation for potential violations of tax, money laundering and foreign lobbying laws through his past business relationships overseas. To date, Hunter has not been criminally charged.

More on this story via Fox News:

When asked about the contents of the emails, White House deputy press secretary Andrew Bates told Fox News Digital: “We don’t comment on the laptop.”

A spokesperson for Brown University told Fox News Digital that “because of privacy, we do not inquire of our Registrar’s office, Admissions office or any other office when we receive media requests such as these for information about applicants to Brown.”

“Given both the requirements of federal law and Brown’s own commitment to the confidentiality of student records, we do not entertain these requests because we would not be at liberty in any circumstance to share information on any specific applicant to Brown or recommendation letters in support of any prospective student’s application,” the spokesperson told Fox News Digital.

As recently as Tuesday, White House press secretary Jen Psaki was asked to confirm if Biden’s statement that he has not discussed with his son his overseas business dealings still stands, to which she replied: “Yes.”

Hunter Biden has been under federal investigation for his “tax affairs” since 2018, according to a source familiar with the matter.

Fox News first reported in December 2020 that Biden was a subject/target of the grand jury investigation, a well-placed government source told Fox News. According to the source, a “target” means that there is a “high probability that person committed a crime,” while a “subject” is someone you “don’t know for sure” has committed a crime.”

The federal investigation into Hunter Biden was predicated, in part, by Suspicious Activity Reports (SARs) regarding suspicious foreign transactions.

Another source familiar with the investigation told Fox News in December 2020 that the SARs were regarding funds from “China and other foreign nations.”

A Treasury Department official, who did not comment on the investigation, spoke broadly about SARs, telling Fox News that SARs are filed by financial institutions “if there is something out of the ordinary about a particular transaction.”

The official told Fox News that the mere filing of a SAR does not mean there has been a criminal act, or violation of regulations, but instead, flags that a transaction is “out of the ordinary” for the customer. The official noted, though, that a SAR could be part of a money laundering or tax investigation.