Leftist-Progressives have always been tyrants and fascists; they just never had so much power to destroy people with cancel culture in the past as they have now- so we are seeing an epidemic of abuse of power and people who are on greedy binges to control free Americans.

Much of the problems we face are at the hands of the progressive-‘Liberal” left, who have completely shaken off all appearances of being cool- like classic liberals- and have embraced their inner bitter and angry dictator.

All around the country, people from President Donald J. Trump to the average American who supports Trump- are being persecuted and abused by lawmakers, laws, and courts for not being a part of the leftist ‘collective.’

It feels like all of this is devolving to the point where the United States of America resembles a science fiction movie.

Ever since the 2020 election, shocking things have been happening to real people at an alarming rate. And Jan 6th was a pivotal day where the left went into overdrive to create the cover story, under which massive corruption, abuse, and power grabs would happen right out in the open.

Since that fateful day in January, some Americans have been languishing in prisons in Washington DC under the orders of radical far-left Democrat Mayor Muriel Bowser. Unfortunately, the abuse these prisoners have been under for the past year sounds like they are political prisoners.

Gone are all due process rights to a speedy trial while their cases wind their way through an overturned and purposefully slow judicial system.

Prisoners have complained about extended abuses, and now, according to The Epoch Times, the Department of Justice (DOJ) Has ordered the Veterans Administration( VA) to suspend all benefits of at least one Jan. 6 Prisoner.

‘This is what you have when vindictive leftists get in charge of major parts of the government’: Rep. Gohmert told the outlet in reaction to the story.

Recently it was reported by local Florida news that a federal judge ‘ruled the trial of two Oath Keepers members will stay in Washington, D.C. Attorneys for Kelly Meggs of Dunnellon and Kenneth Harrelson of Titusville, who argued that the January 6 Commission hearings were tainting the potential jury pool.”

Both Meggs and Harrelson were arrested by the FBI shortly after the events of January 6, 2021, in which hundreds of protestors entered restricted areas of the Capitol building.

Both are members of The Oath Keepers, an organization comprised primarily of veterans and law enforcement that vows to “defend the Constitution against all enemies, foreign and domestic.”

The Epoch Times reported on the consequences of being charged with these crimes:

Just when the wife of one incarcerated Jan. 6 prisoner believed things couldn’t get worse, the Department of Veterans Affairs (VA) informed her they are going to suspend all of her husband’s benefits. According to United States Representative Louie Gohmert (R-Texas), “this is what you have when vindictive leftists get in charge of major parts of the government.”

In an unsigned letter from the VA—dated June 13 and appearing to originate from the “Director Regional Office,”—Angel and Kenneth Harrelson were notified that the administration “received information from the United States Department of Justice” that Kenneth had been “indicted and charged with Seditious Conspiracy (18 U.S.C 2384).”

The letter further noted that: “Pursuant to 38 U.S. Code § 6105(a)”—Forfeiture for subversive activities—”after receiving notice of an indictment for the above offense” the “VA must suspend payment of gratuitous benefits pending disposition of the criminal proceedings. If convicted, gratuitous benefits are forfeited, automatically, from and after the date of the offense.” 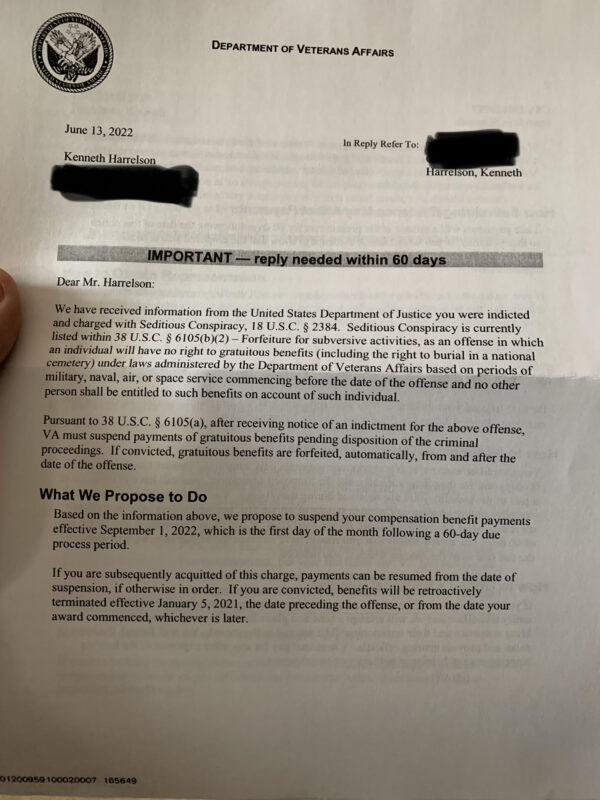 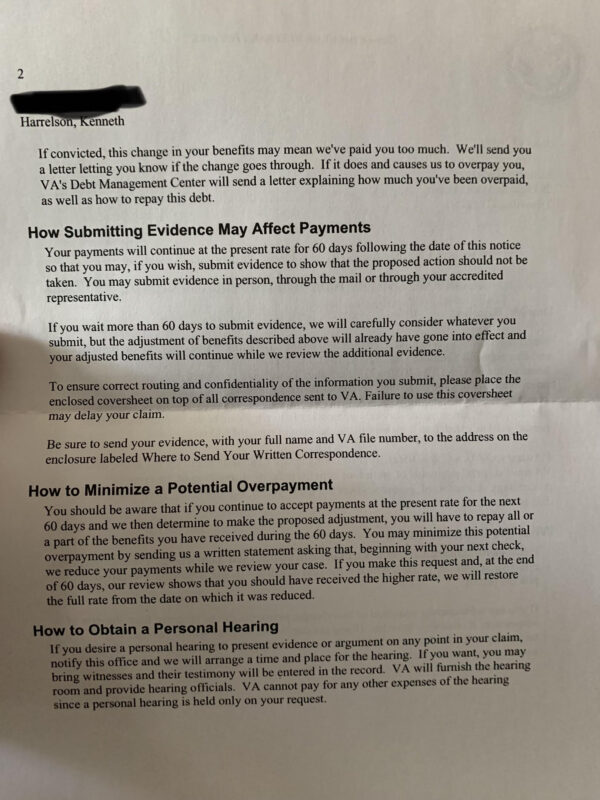 “Based on the information above,” the VA further informed the Harrelsons that they “propose to suspend” their “compensation benefit payments effective September 1, 2022, which is the first day of the month following a 60-day due process period.”

“If you are subsequently acquitted of this charge, payments can be resumed from the date of suspension, if otherwise in order. If you are convicted, benefits will be retroactively terminated effective January 5, 2021, the date proceeding the offense, or from the date your award commenced, whichever is later.”

According to the 18-page criminal complaint (pdf), Kenneth Harrelson was charged with Conspiracy (1) Obstruction of an Official Proceeding and Aiding and Abetting (2) Destruction of Government Property and Aiding and Abetting (3) Entering and Remaining in a Restricted Building or Grounds (4) Tampering with Documents or Proceedings (5). According to the Arrest Warrant (pdf), Kenneth was arrested at his home in Titusville, Florida, on March 10, 2021. According to the Criminal Docket, the seditious conspiracy charge was added with several others on Jan. 12, 2022. 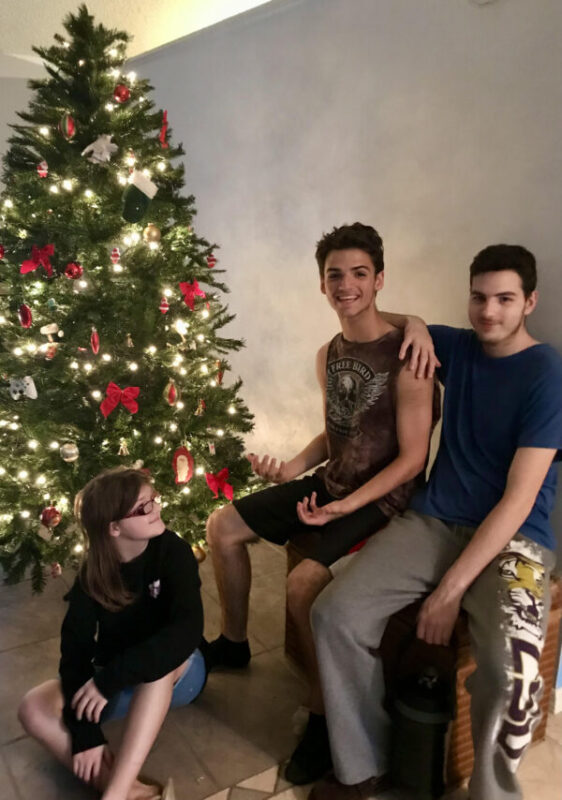 Kenneth is currently being held in the Correctional Treatment Facility in southeast Washington and has been incarcerated, without a trial and without being convicted of any crime, for over 475 days. 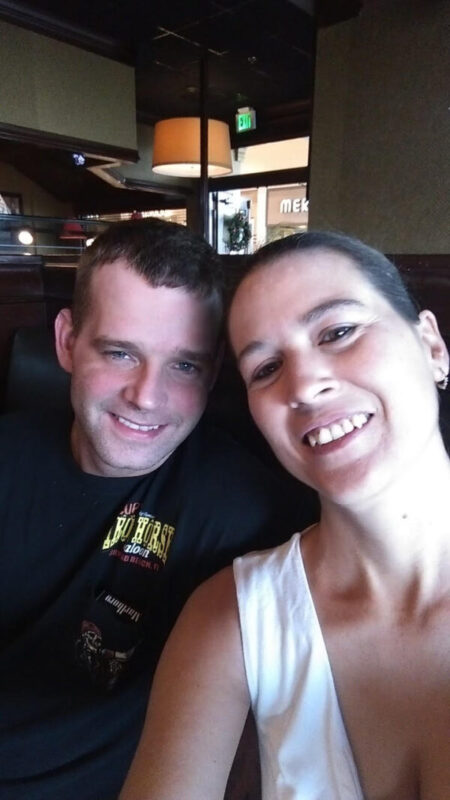 Page two of the letter explains that: “if convicted,” the change in his benefits “may mean” the VA had paid “too much,” in which case they will send another letter letting them “know if the changes go through.” If so, the “VA’s Debt Management Center will send a letter explaining how much” they’ve “been overpaid, as well as how to repay this debt.”

This is the ongoing abuse of Americans who dared support and defend Trump and his America First policies. It is a story that should never be forgotten.