In August, the country watched in shock when the FBI had a vicious political raid on President Donald J. Trump’s family home in Florida, and ransacked his family’s belongings, then harassed him through the Democrat party and the media pushing negative propaganda- meant to justify the actions against him, slamming his family, his associates and his loved ones.

The Department of Justice and the FBI then exposed their dark tactics and intentions to shape politics in the US, which is not something Americans are used to seeing play out in the open.

While all of the corruption was being exposed from the Trump raid, further evidence of drastic corruption at the FBI and from within the Democrat administration was also exposed- showing how the FBI protected Biden – during the days before the 2020 Presidential election and suppressed voters from talking about suppressed news stories that were negative to Biden- all things the FBI was responsible for.

TRENDING: Pelosi Already Has Her Eyes on Another Job

But recently there has been a little pushback- and Trump has been assigned a special master to evaluate what happened during the raid, the DOJ has been stopped from investigation for a time, and the country is finding out that Biden has his fingerprints all over the order to harass Trump.

From We Love Trump:

U.S. District Judge Aileen Cannon on Monday granted Trump’s request to appoint a Special Master to review the documents seized by the FBI during the August 8th raid.

The ruling “temporarily enjoins” or forbids the Biden Administration from “reviewing and using the seized materials” in the DOJ’s investigation of Trump until the review is completed.

“In pages 2-3 of the ruling, Judge Cannon revealed that the Biden regime actually ORDERED the FBI raid to seize documents in Mar-a-Lago,” Infowars reported. 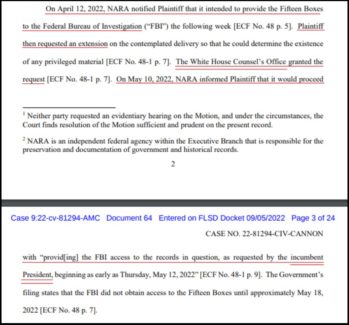 When asked last month whether the White House coordinated the FBI’s raid with the DOJ, Biden denied having any involvement.

.@pdoocy asks Biden if he knew about the FBI's raid on Trump's home pic.twitter.com/jyCRQcOhmz

Karine Jean-Pierre says Biden did not have foreknowledge and was not briefed about the FBI raid at Mar-a-Lago. She also swats down Zeke Miller's question about if the raid sends a bad signal to the rest of the world. pic.twitter.com/wU79BWcOM8

Looks like the Biden regime lied to the American people once again.

This shows the FBI raid was a politically motivated operation to target Joe Biden’s chief political rival in a bid to keep him from running for president once again in 2024.

The special counsel tasked to review the seized documents for instances of attorney-client privilege and executive privilege will be selected on Thursday.

The following is a summary of Cannon’s ruling

NPR reported on Cannon’s ruling with a bit of a leftist slant:

U.S. District Judge Aileen Cannon has granted former President Donald Trump’s request for a special master to review documents seized by the FBI from Mar-a-Lago last month, temporarily stopping federal prosecutors from using those documents in their investigation into obstruction and mishandling of government secrets.

The decision was expected. Last weekend, the judge said she was inclined to grant Trump’s request, and a hearing on the matter took place last Thursday. At that hearing, the Justice Department laid out its argument against the special master and signaled it was likely to appeal such a ruling.

Cannon, a Trump appointee, cited in her order on Monday the need to ensure “the appearance of fairness and integrity under the extraordinary circumstances presented.”

A special master is an independent third party, typically an attorney, appointed by the judge to review materials seized in a search for anything that may be protected from investigation by attorney-client privilege, or executive privilege, as Trump is claiming.

The judge also ordered the government to cease any review or use of the materials for its criminal investigation until the special master review is completed, but Cannon said the intelligence community may continue its review to determine potential national security risks from the classified material being kept outside of a secure government facility.

Cannon set a deadline of Friday (Sept. 9) for the two parties to submit a joint filing with a list of proposed candidates to be named special master and a detailed proposal to establish the duties and limits of the special master, as well as a schedule for the review and compensation.

Legal experts have told NPR that requesting a special master is another attempt from Trump to undermine the work of the Justice Department and question their integrity. But others have argued that it will just be another procedural loophole the department has to go through during their investigation into the documents.

Previous documents filed in court by the Department of Justice revealed that Trump was holding several classified documents at Mar-a-Lago, and the DOJ has raised questions on whether Trump and his team attempted to obstruct justice by concealing or removing some of the documents authorities wanted.