A series of emails reveals that Joe Biden agreed to foot the bill for son Hunter Biden’s deal with a Chinese government-controlled company.

Hunter’s overseas business dealings tie the president even closer to the issues – and make the president’s previous claims that he never discussed them with his son even more implausible.

After he left office as vice president, Joe and his wife earned millions of dollars through companies they owned.

In addition to book deals and speaking engagements, they received some cash in the form of cash.
The president reported almost $7 million more income on his tax returns than he did on transparency reports filed with the government, according to an analysis of his financial records by reporters.

The first lady’s salaries and other amounts not required in his reports can account for some of that difference, but still leaves $5.2 million earned by Joe’s company that is not in his transparency reports.

The ‘missing millions,’ along with emails found on Hunter’s abandoned laptop showing Joe would own a 10% stake in Hunter’s Chinese deal, should have everyone asking: was Joe Biden paid from the venture?

The assistant to Hunter, Katie Dodge, emailed Richard Ruffner at the Biden campaign and Linda Shapero at Biden’s office to tell them Joe had agreed to pay his bills in the hundreds of thousands of dollars.

‘I spoke with Hunter today regarding his bills. It is my understanding that Hunt’s dad will cover these bills in the short-term as Hunter transitions in his career,’ Dodge noted. 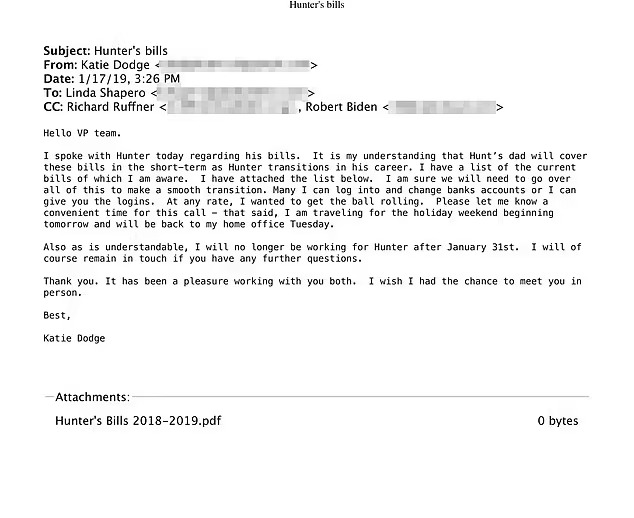 There was an attachment of bills totaling $737,130.61 in the email from the assistant.

$28,000 of the legal fees were for the restructuring of Hunter’s joint venture with Bank of China, a government-controlled bank.

On the spreadsheet, it stated ‘Faegre Baker Daniels: BHR Restructuring’ is priced at $28,382 and is due ‘ASAP’.

George Mesires, Hunter’s personal lawyer, is a partner at Faegre Baker Daniels, which has now been renamed Faegre Drinker.

Joe agreed the same year to take on the bills from Hunter: ‘No one in my family will have an office in the White House, will sit in on meetings as if they are a cabinet member, will, in fact, have any business relationship with anyone that relates to a foreign corporation or a foreign country.’

The emails suggest that although Hunter retained his 10% stake in the firm through 2021, as confirmed by the White House’s press secretary Jen Psaki in February, Joe was aware of it, and agreed to cover Hunter’s legal fees.

In an apparent attempt to avoid an alleged tax fraud charge, Hunter took out a million-dollar loan in order to pay his delinquent tax bill, the New York Times reported earlier this month.

Hunter’s foreign business deals are the subject of an investigation by Senator Ron Johnson and Senator Chuck Grassley. Johnson said Joe Biden’s unaccounted-for millions are ‘another disturbing piece of information that raises questions that deserve answers.’

‘When will the corporate media start doing their job and ask President Biden these questions?’ he asked. ‘And when will President Biden start being honest with the public? The American people deserve the truth.’

Grassley told reporters: ‘Evidence of the president’s financial and business connections to Hunter continues to grow. It’s imperative for the first family to show the American people the transparency that they deserve.’ 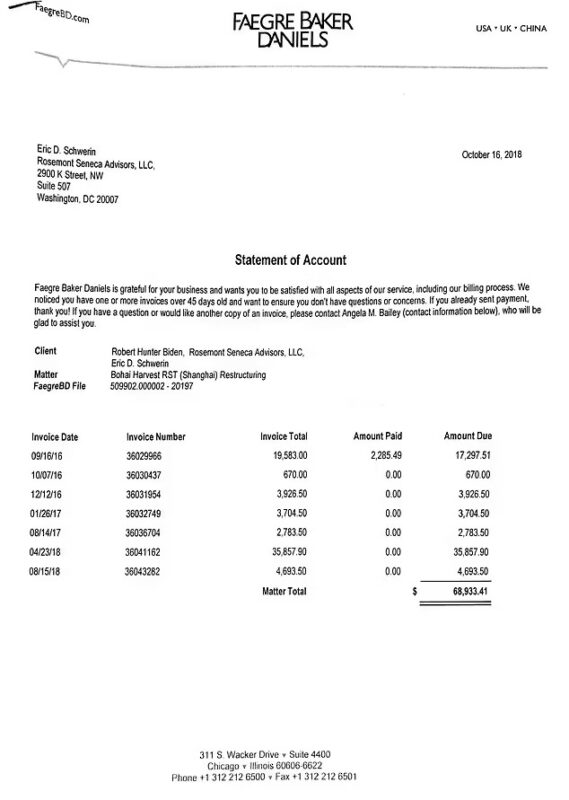 Federal investigators are investigating the president’s son for tax infractions, money laundering, and illegal lobbying on behalf of foreign clients.

The financial transparency disclosures of Joe show he had plenty of money to meet Hunter’s escalating debts.

When Joe was in office, he had a relatively modest income, but he enjoyed an influx of millions of dollars soon after he left office, much of which he earned through his memoir book deal and speech fees that were eye-watering.

According to the Biden campaign, he and First Lady Jill Biden had a gross income of $16.5 million between 2017 and 2019. 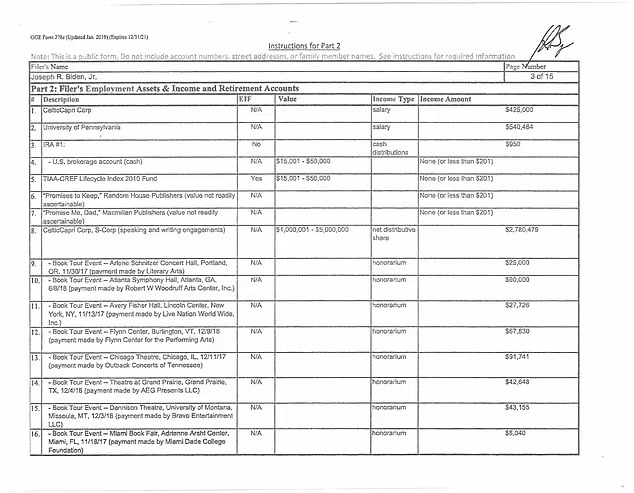 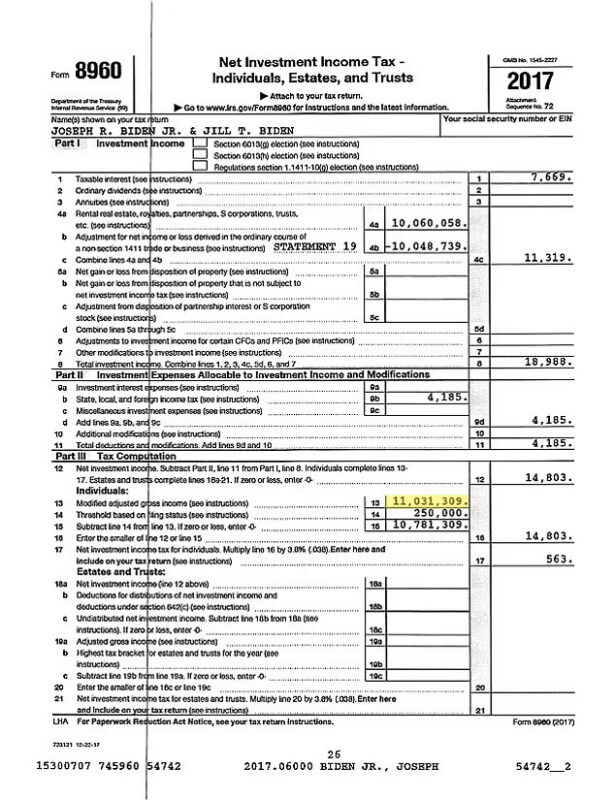 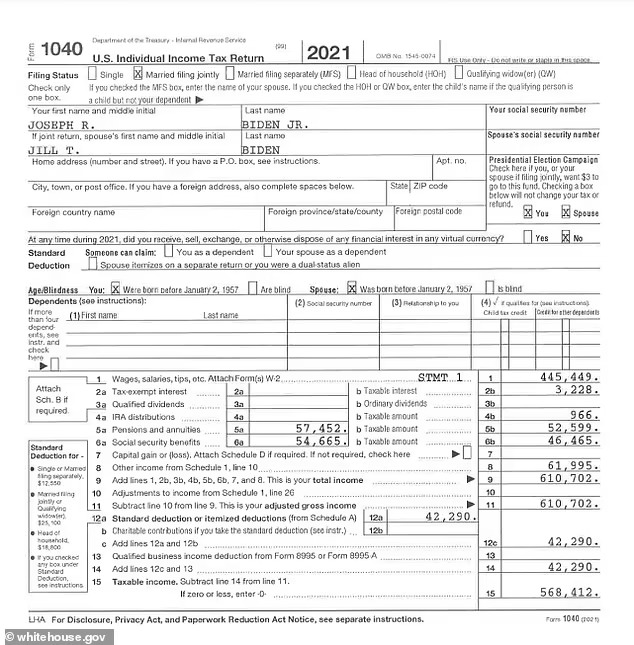 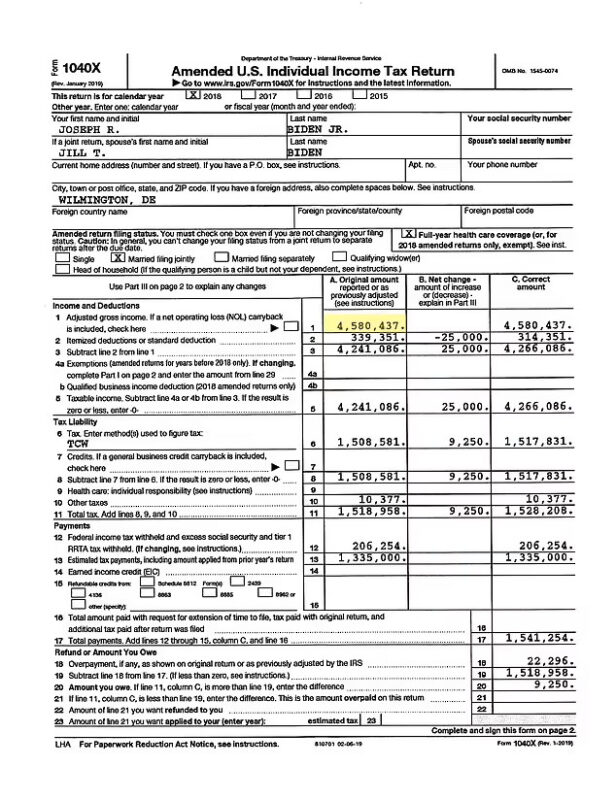 CelticCapri Corp and Giacoppa Corp, the two companies they primarily use for writing and speaking engagements, accounted for the majority of the income they received.

For his own and his wife, Joe reported only $9.6 million in income in his filings to the Office of Government Ethics (OGE) during the same period.

The First Lady earned roughly $7million from her teaching job at Northern Virginia Community College and was paid a salary from Giacoppa, which the couple was not required to report to the OGE.

When Joe’s income reported on his OGE reports is compared to what he told the IRS, a gap of nearly $5.2 million remains unaccounted for.

To date, there is no conclusive evidence that Joe benefited from Hunter’s business dealings.

Nonetheless, the president’s alleged ties to Hunter’s Chinese ventures, and the potential discrepancy in his financial filings, raise troubling questions about the unexplained $5,180,071 in his account.