Home World USA BREAKING: All Trump’s Phones Were Tampered With

As the Jan 6 committee hearings continue, examining evidence of communications on that day is crucial.

But a report circulating today states that the phones of then President Trump and top officials were erased and therefore the communications of that day are not available.

Questions as to who erased the phones and why are being bantered back and forth.

One side presented by CNN says:

“The Defense Department wiped the phones of top departing DOD and Army officials at the end of the Trump administration, deleting any texts from key witnesses to events surrounding the January 6, 2021, attack on the US Capitol, according to court filings.

The acknowledgment that the phones from the Pentagon officials had been wiped was first revealed in a Freedom of Information Act lawsuit American Oversight brought against the Defense Department and the Army.

Miller, Patel, and McCarthy have all been viewed as crucial witnesses for understanding the government’s response to the January 6 Capitol assault and former President Donald Trump’s reaction to the breach.

All three were involved in the Defense Department’s response to sending National Guard troops to the US Capitol as the riot was unfolding. There is no suggestion that the officials themselves erased the records.

The government’s assertion in the filings that the officials’ text messages from that day were not preserved is the latest blow to the efforts to bring transparency to the events of January 6. It comes as the Department of Homeland Security is also under fire for the apparent loss of messages from the Secret Service that day.

American Oversight is now calling for a “cross-agency investigation” by the Justice Department to investigate the destruction of the materials.

“It’s just astounding to believe that the agency did not understand the importance of preserving its records — particularly [with regards] to the top officials that might have captured: what they were doing when they were doing it, why they were doing, it on that day,” Heather Sawyer, American Oversight’s executive director, told CNN.”

But Patel Patriot had a different opinion, expressed on We Love Trump.

The website states his claim is that “as Devolution was rolled out it needed to be protected and insulated and that wiping the phones was an essential step to stop the black hats.”

“This article will outline one of Trump’s key executive orders that I truly believe spells out that we are no doubt in the middle of some sort of Continuity of Government plan that I believe to be a plan of devolution. I briefly touched on this executive order in Devolution – Part 3, but it deserves its own article and detailed breakdown. 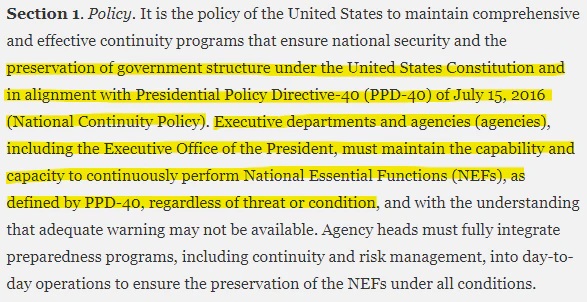 I’ve said many times throughout my series that we need to start thinking bigger. I always thought I was thinking bigger but researching for this article led me to the realization I was wrong.

I’ve spent a majority of my series focused on the Department of Defense and the military, and they still are very important to what is unfolding, but devolution is much bigger than just the DoD and the military. Just how much bigger?”

Here is more from his Substack:

“In the very first paragraph, we are made aware of the context that this EO is being issued in. Throughout the entire FMR EO, the phrase “natural disaster” is never mentioned, yet the context of “War and National Defense” is immediately clarified. This is very important. The entire basis for this EO is discussing continuity of government during war and you will see more proof of this as we continue.”

Continuing from his Substack:

“Let’s briefly review what we just went over to make sure we understand the importance of what we have covered so far.

This Executive Order stemming from Trump’s war powers is outlining the implementation and execution of a continuity plan. It describes to us the Executive Committee who is responsible for implementing and executing that plan.

It also tells us there are subordinate bodies and working groups involved in supporting the Executive Committee and their work in implementing and executing that plan.

It also tells us exactly who would serve as the back-channel to the President for this plan.”

The state of the phones and this report suggests that the phones were tampered with and questions still need to be answered.