Joe Biden and the Democrats have suffered a collective meltdown over the fact that a leaked draft of the Supreme Court’s opinion indicates the high court is poised to overturn Roe v. Wade.

This critical decision would each state to answer questions regarding the legality of abortion, rather than the federal government. The draft opinion, which is written by Justice Samuel Alito, is an unprecedented leak and widely viewed as a historic act of judicial destruction.

Joe Biden responded to the leak by saying he believes that “a woman’s right to choose is fundamental,” and arguing that “basic fairness and the stability of our law demand that it not be overturned.”Biden added that liberal voters should “elect pro-choice officials” during the upcoming November’s midterm elections.

“We do not know whether this draft is genuine, or whether it reflects the final decision of the Court,” Biden said. “With that critical caveat, I want to be clear on three points about the cases before the Supreme Court. First, my administration argued strongly before the Court in defense of Roe v. Wade. We said that Roe is based on ‘a long line of precedent recognizing ‘the Fourteenth Amendment’s concept of personal liberty’… against government interference with intensely personal decisions,’” Biden said.

“I directed my Gender Policy Council and White House Counsel’s Office to prepare options for an Administration response to the continued attack on abortion and reproductive rights, under a variety of possible outcomes in the cases pending before the Supreme Court,” Biden said.

He added: “We will be ready when any ruling is issued.”

“I believe that a woman’s right to choose is fundamental, Roe has been the law of the land for almost fifty years, and basic fairness and the stability of our law demand that it not be overturned,” Biden said. Here’s a look at his full statement: 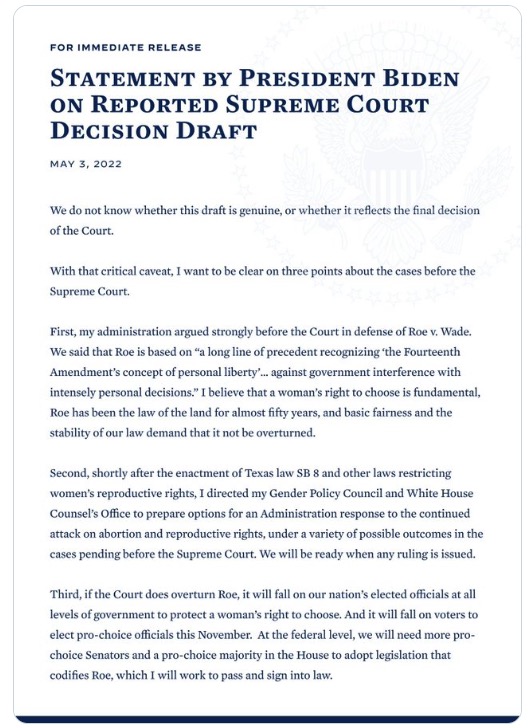 Left-wing protests erupted over the leaked opinion. “Crowd of protesters is growing quickly, and pushing toward the barricade that the handful of guards put up earlier tonight,” one person wrote to Twitter alongside footage of the protests forming. “Chants of ‘fascist scum have got to go,’ interspersed with the names of the conservative justices.”

Imagine being this determined to kill babies. https://t.co/RxRg0cwKdO

Mock wrote about Ben Shapiro’s brilliant responses. “Find you someone who loves you the way the Left loves killing pre-born babies,” Shapiro wrote in response. Take a look:

Find you someone who loves you the way the Left loves killing pre-born babies.

I'm sorry the Constitution is happening to you.

I have been reliably informed that some men are women and some women are men, so this point is moot https://t.co/5ozqylaITv

You know what strips people of their bodily autonomy? Being killed in the womb. https://t.co/pAThdOSfdw

I am amazed by the Left's fantastical pretzel argument in which democracy is threatened by the Supreme Court returning the abortion issue to, you know, the voters.

More on this story via Fox News:

Biden added that if the Supreme Court “does overturn Roe, it will fall on our nation’s elected officials at all levels of government to protect a woman’s right to choose.”

“And it will fall on voters to elect pro-choice officials this November,” Biden said. “At the federal level, we will need more pro-choice Senators and a pro-choice majority in the House to adopt legislation that codifies Roe, which I will work to pass and sign into law.”

The draft leak, first obtained by Politico, was written in early February. It is not immediately clear if the draft has been rewritten or revised.

The Supreme Court has declined to verify or disavow the document. Conservatives have suggested the leak may represent an attempt to pressure a Supreme Court justice to change his or her vote on the pivotal case.