As we reported earlier this year, several charity auditors have expressed concern over how Black Lives Matter’s $60 million in donations was managed after it emerged that some people announced as the organization’s leaders never actually took on the position, and no one seemed to know who handled the finances.

Tax documents for the BLM charity, from 2019, mention an address in Los Angeles that does not exist, and the remaining two directors were unable to provide information – with one even removing BLM associations from his social media accounts after being approached by the Washington Examiner.

In announcing its 2021 990 tax return, Black Lives Matter Global Network Foundation (BLMGNF) made its first public financial disclosure since its formation in 2014. According to The Daily Mail’s investigation into the return, the plan’s leader, Marxist trained Patrisse Cullors, orchestrated related party transactions, waste, fraud, and abuse.

The purpose of this article is to provide an auxiliary analysis that details the life cycle of the BLMGNF. It also reveals two other unpublished IRS tax returns, which reveal substantial unaccounted funds and huge reporting gaps.

The BLMGNF was established in late 2014 as a pseudo nonprofit. Since 2016, Thousand Currents has been BLMGNF’s donor advisory sponsor.

Financial sponsorships are tax dodges in which a nonprofit sponsor funnels money through a conduit arrangement to a pseudo organization or a group of individuals to legally evade payment of federal income taxes. Tax deduction receipts are issued by the fiscal sponsor to donors. Often, these arrangements lack oversight, making them highly vulnerable to misuse and fraud, as well as hiding their beneficiaries. Fiscal sponsors are not required by the IRS to disclose their conduit arrangements, donations, donors, or expenses in their 990 tax returns.

Thousand Currents received donations from BLM indulgences, which were handled by ActBlue. If you are unfamiliar with ActBlue, it provides Democrats, progressive groups, and far-left nonprofits with a platform for fundraising. Businesses donated to Thousand Currents (BLM tribute) and far-left foundations gave grants.

By filing a blank return, BLMGNF indicates that no donations or expenses were received. The June 2019 audited financial statements of thousands currents’ donor sponsor revealed that it received $3.4 million in donations while spending $1.8 million on expenses. Kailee Scales received $186K from Thousand Currents as BLMGNF Managing Director, according to its 2019 990.

Thousand Currents was led by Susan Rosenberg, a former domestic terrorist who served as Vice-Chair of the Board of Directors. As a member of the Weather Underground and associate of Bill Ayers, she played an important role in the organization.

In July 2020, donor advisory duties were unceremoniously transferred to the non-profit ultra-left Tides Foundation, following heavy and adverse publicity highlighting her involvement in Thousand Currents and possible BLM activity. California’s Charity Registry recorded the transfer of assets; however, the information was later secretly wiped out.

Thousand Currents’ audited financial statements for June 2020 indicated that the company transferred $66.5 million to BLMGNF. The following is a footnote omitting the disclosure of the transfer of funds to Tide Foundation from Thousand Currents financial statements. During the George Floyd summer protests the following six months, Tide continued to collect significant BLMGNF donations.

For the shorter period of January through June 2020, BLMGNF filed another blank 990-EZ on November 11, 2021. A separate filing also changed Thousand Currents’ accounting period from a calendar year to a fiscal year ending in June, a device used to delay disclosures and conceal its $66.5 million holdings.

Addresses for tax returns are entrusted to Marc Elias’s law firm. In the Fusion GPS scandal that created the false allegations of Trump-Russia collusion, Marc Elias played a central role and is a suspect in a criminal investigation.

BLMGNF fails to disclose that the Tide Foundation serves as a donor advisory or the number of custodial funds transferred thereto in its latest 990 tax return for June 2021. The BLMGNF website reveals that the Tides Foundation holds $26.1 million in custody funds outside the nonprofit (exhibit below).

Compared to Thousand Currents’ transfer of $66.5 million to Tide, this amount is substantially less. BLMGNF must amend its IRS return and disclose Tide’s donor advisor services due to the omission of custodial funds still being held by Tide. 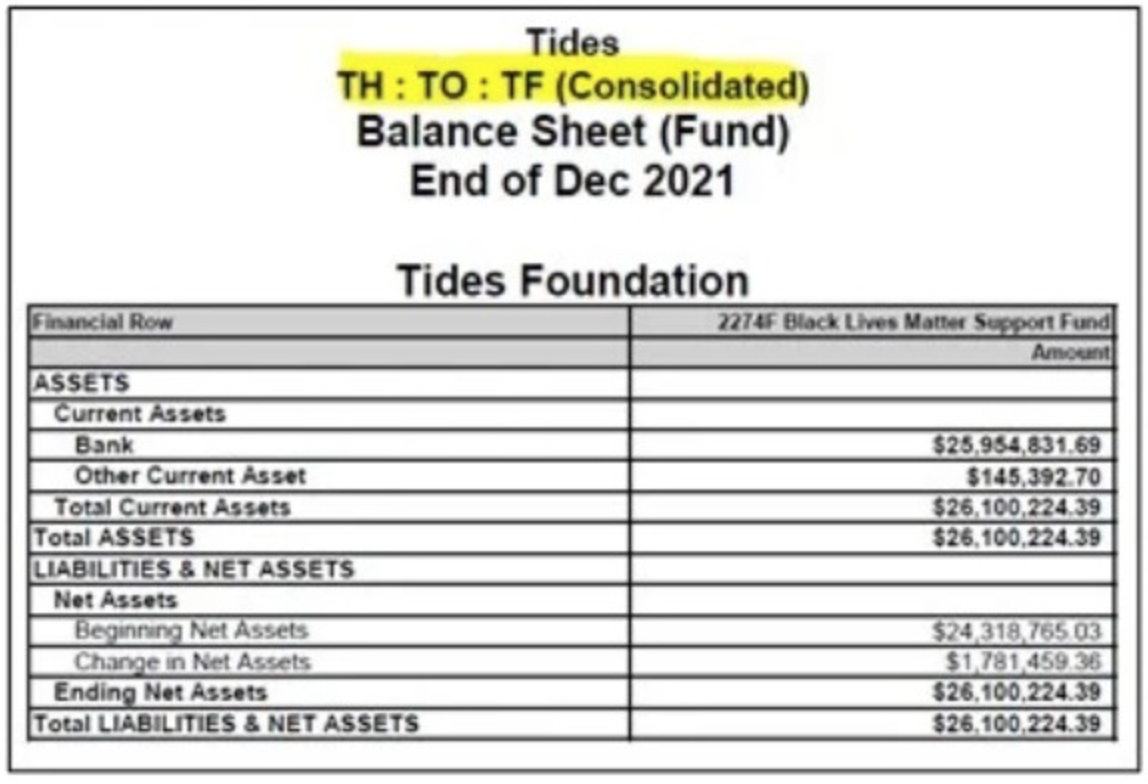 Deliberately filing blank 990 tax returns when undisclosed advisors collected millions of dollars in donations is obfuscation. By doing so, irregularities are hidden from the IRS. During this time, Cullors spent advisory funds on luxury homes, demonstrating that the advisors failed to monitor Cullors.

See the timeline below to chart the evolution of the BLMGNF organizations.

In different states, BLMGNF’s charitable registrations have been revoked, and investigations are underway regarding fraud, waste, and abuse of charitable funds. In spite of this, the Department of Justice, FBI, or IRS do not appear to be investigating BLM charity frauds or have an interest in them.