Special Counsel John Durham has charged former Hillary Clinton campaign lawyer Michael Sussmann with making a false statement to federal investigators regarding the origins of the ‘Russiagate’ investigation. Specifically, Sussmann claimed that he wasn’t representing any client when he informed FBI General Counsel James Baker that Trump had a secret computer connection to the Russians.

In a filing early this year, attorneys for Sussmann argued that the allegation is not material to the case and that Sussmann’s speech is protected by the First Amendment.

Durham reacted to the filing strongly, focusing particularly on Sussmann’s claim that lying to a federal agent is protected speech.

“Far from finding himself in the vulnerable position of an ordinary person whose speech is likely to be chilled, the defendant – a sophisticated and well-connected lawyer – chose to bring politically-charged allegations to the FBI’s chief legal officer at the height of an election season,” Durham’s filing stated.

“He then chose to lie about the clients who were behind those allegations,” Durham continued. “Using such rare access to the halls of power for the purposes of political deceit is hardly the type of speech that the Founders intended to protect. The Court should therefore reject defendant’s invitation to expand the scope of the First Amendment to protect such conduct.”

Durham added that he plans to bring testimony at trial from a number of FBI and government witnesses that Sussmann’s falsehoods were both relevant and material, and that likely influenced the outcome of the ‘Russiagate’ case.

“The expected testimony of multiple government witnesses will refute the defendant’s argument that the defendant’s false statement was immaterial. As noted above, the government expects that current and former FBI employees will testify at trial that understanding the origins of data and information is relevant to the FBI in multiple ways, including to assess the reliability and motivations of the source.

And now witnesses are dropping bombshell testimonies that could see Hillary in very hot water.

On Friday, Robby Mook, Hillary Clinton’s former campaign manager, testified that she approved the sharing of debunked allegations linking Donald Trump and the Kremlin-backed Alfa Bank with the media before the 2016 election.

At the trial of Michael Sussman, the first person indicted by Special Counsel John Durham in connection with his Russia origins probe, Mook testified that Marc Elias initially briefed him on Alfa Bank.

As part of that decision, he told The New York Times that he also talked to then-senior adviser Jake Sullivan – now White House National Security Advisor- and campaign chairman John Podesta about whether to share the information.

‘I discussed it with Hillary as well,’ Mook said in court.

According to him, the campaign was not ‘totally confident in the legitimacy of the data’, so they hoped a reporter would evaluate the claims to see if they were ‘accurate’ or ‘substantive.’

‘I don’t remember the substance of the conversation, but notionally, the discussion was, hey, we have this and we want to share it with a reporter,’ Mook added.

Afterward, they decided to give it to the reporter, he said.

‘I recall it being a member of our press staff,’ Mook explained. ‘We authorized a staff member to share it with the media.’ 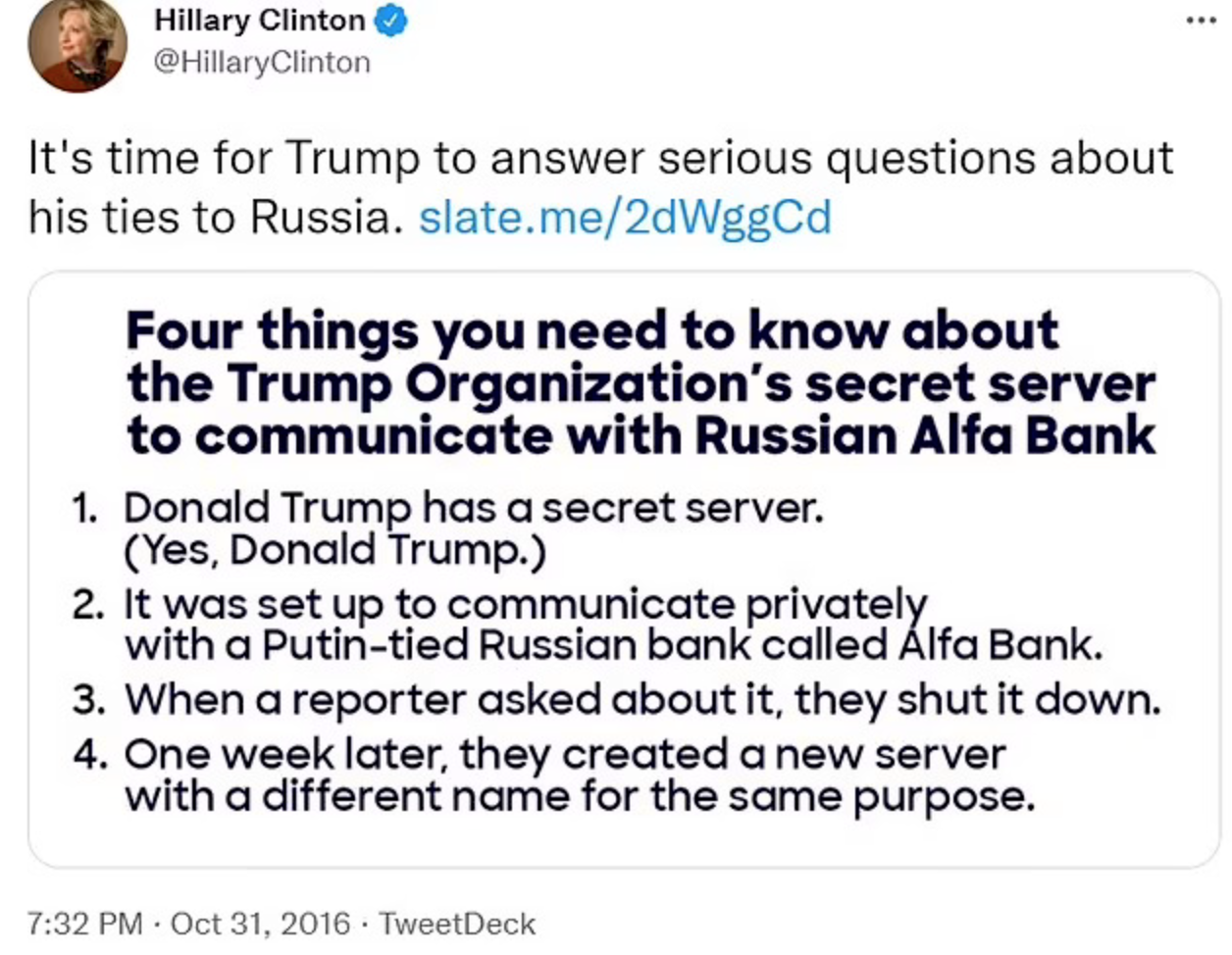 Hillary’s notorious message from October 31, 2016, was also displayed in court: ‘Computer scientists have apparently uncovered a covert server linking the Trump Organization to a Russian-based bank.’ 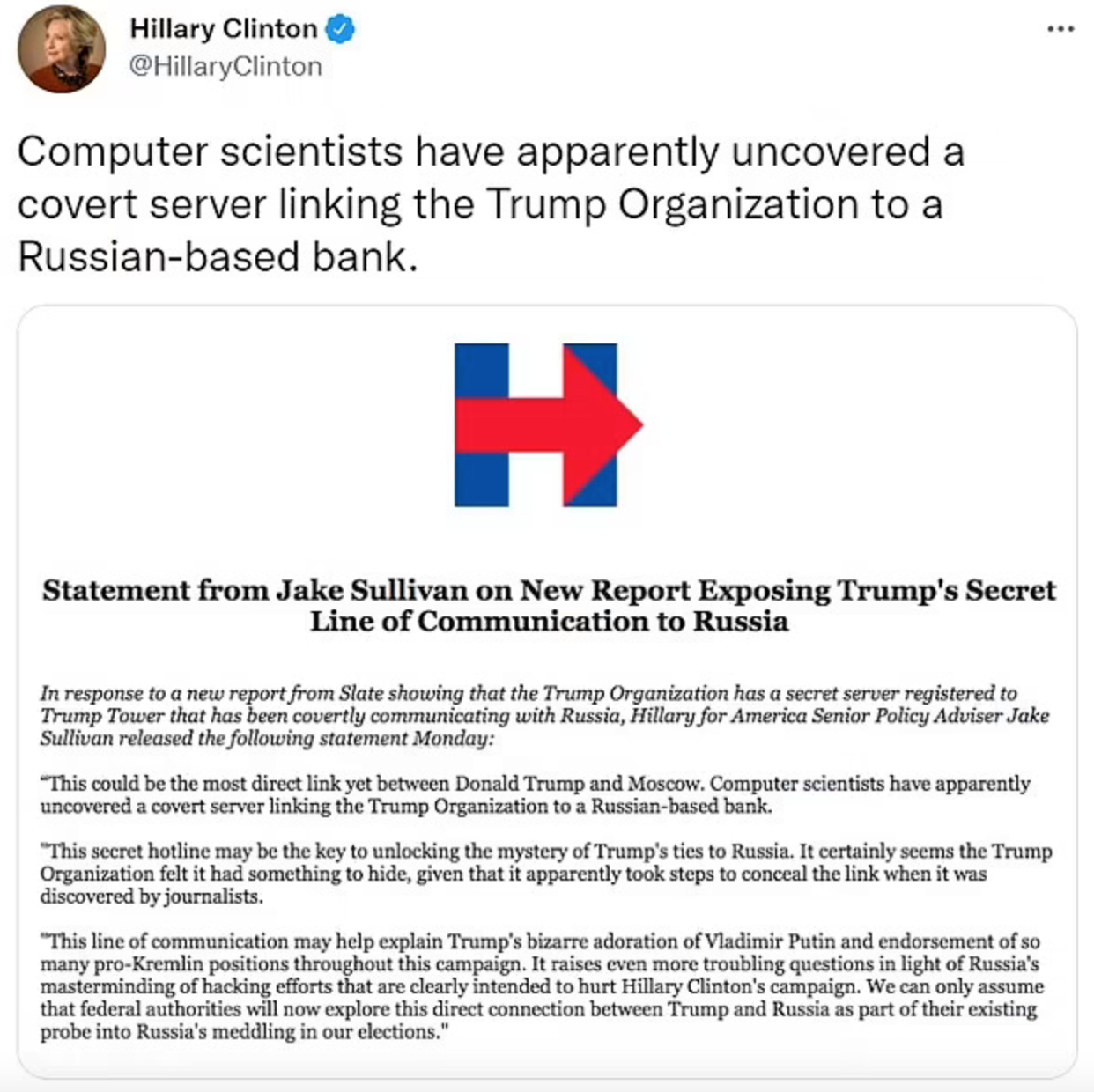 As part of her piece, she included Sullivan’s statement with the headline ‘exposing Trump’s Secret Line of Communication to Russia.’

Baker testified a day earlier that he was assured the attorney did not act on behalf of a particular client when he presented the information intended to cast suspicion on Trump.

According to Baker, Sussmann assured him that he was not at FBI headquarters on behalf of a particular client during a meeting on Sept. 19, 2016.

‘Michael’s a friend of mine and a colleague, and I believed it and I trusted that the statement was truthful,’ he stated.

When the FBI presented the data, it was investigating the possibility that the Kremlin and the Trump campaign hoped to influence the outcome of the presidential election in November.

Due to the existence of the investigation and Sussmann’s assertion that the news media would report on the data, Baker took the information seriously as a potential national security threat.

According to him, he immediately alerted the FBI’s chief counterintelligence official, believing it was another piece of evidence in the Trump-Russia investigation. He was concerned that speculation about the cyber data might prompt Russia to alter its course.

‘I already knew that we had an investigation going on of that nature, and here was another set of allegations relating to a different aspect of alleged interactions or connections between the Russian government’ and the Trump campaign, Baker explained.

Later he said: ‘It seemed to me of great urgency and great seriousness that I would want to make my bosses aware of this information.’

According to Baker, Sussmann told him that the information suggesting a digital backchannel came from recognized cybersecurity experts.

According to Baker, there was ‘nothing there.’

In a trial that began on Monday, Durham and his prosecutors will be put to the test for the first time publicly after months of escalating confrontational court filings by both sides.