Marxists in state and federal government continue to concoct plans to usurp the US Constitution and American civil rights in order to prevent American citizens from voicing concerns about enormous power grabs and to impede inquiries of the administrative state’s blatant election theft.

After a very suspect 2020 election, which was actually the culmination of years of worries over election integrity, the administrative state moved into overdrive in an attempt to rewrite a hole in the US Constitution, which might ultimately result in them losing their corrupt authority.

At issue is The Electoral Count Act of 1887, a federal legislation of the United States that supplements the processes outlined in the United States Constitution for the counting of electoral votes following a presidential election.

The dishonest administrative state, comprised of Democrats and RINOS, desires to seize control of this measure in order to lock it down, ensuring that no one ever doubts elections without the possibility of legal repercussions.

Consider this issue’s headline from the left-leaning publication VOX:

“The bill to prevent Trump from stealing the next election explained. It will likely soon pass with bipartisan support.”

They are terrified that Trump, who launched his campaign for president in 2024, would win.

In other words, the government seeks to strip residents of the United States of a vital right to hold the government accountable for how elections are handled.

Vince Quill, representing our allies at We Love Trump, provided the following report:

President Trump has issued a scathing statement in reaction to the proposed Electoral Count Act: 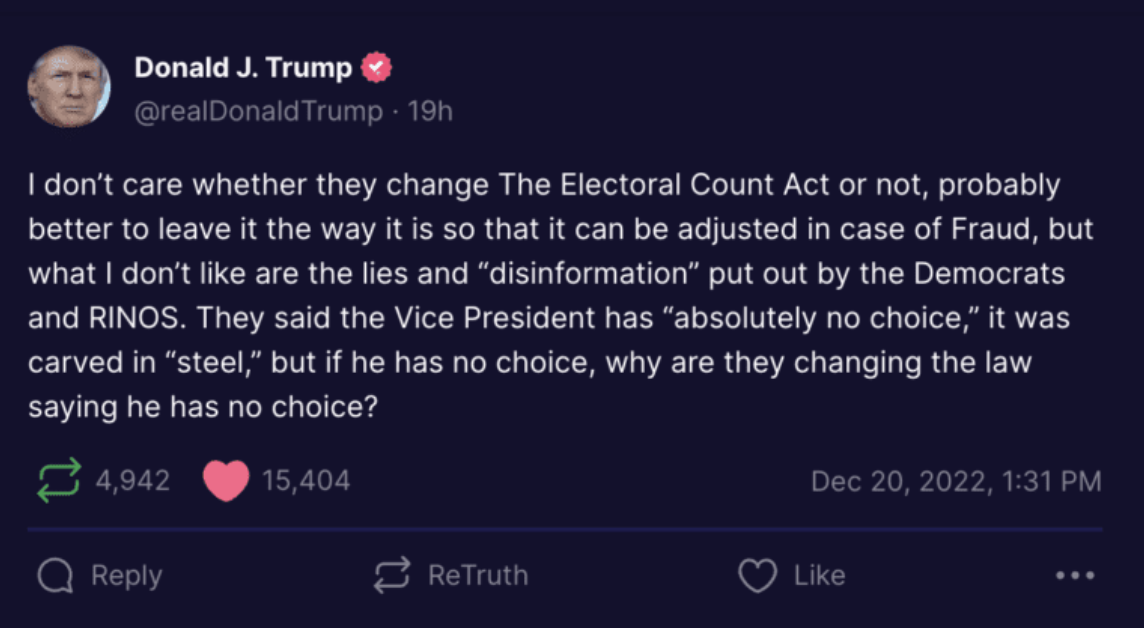 The statute aims to make it far more difficult for legislators and elected officials to contest election results and the establishment narrative.

Why try to modify the law by making the Vice President’s role in certifying election results a purely administrative one, as I have already argued and as President Trump points out?

I believed that the Vice President had no jurisdiction to invalidate a fraudulent and manipulated election.

This is what progressives warned us repeatedly in 2020 when we asserted that Mike Pence might and should refuse to certify the election results. We were called every term in the book.

Conservatives railed against the proposed law:

“The so-called Electoral Count Act is unconstitutional, period. Move on. It’s dead on arrival. Grow a set, republicans, and stop allowing the left to walk all over you. Thanks,” Joe Pags Pagliarulo (@JoeTalkShow) posted on Twitter on December 20, 2022. CONTINUE READING…