Candace Owens went viral on Monday after she responded to a New York Times reporter with citations from the newspaper after the reporter seemed to suggest Owens was echoing Russian state media when she said Ukraine, a nation widely known for its corruption, is corrupt.

“Received an email from The NYTimes asking for comment regarding me ‘advancing ideas that Ukraine is a corrupt country’—similar to Russian state TV,” Owens told her followers via social media. “I replied informing them that I actually got my ideas from The New York Times, and provided them links to their past articles.”

TRENDING: News Just Got A LOT Worse For Joe Biden

Received an email from The NYTimes asking for comment regarding me “advancing ideas that Ukraine is a corrupt country”—similar to Russian state TV.

I replied informing them that I actually got my ideas from the New York Times, and provided them links to their past articles. 😂 pic.twitter.com/Zy6a7Btih4

“Hi there, I’m writing from The New York Times,” an email from the reporter said. “We’re working on a story about Russian messaging that includes some of your comments.”

“We note that you advanced the idea that Ukraine was a corrupt country, which matched comments we’ve seen from Russian state media,” asserted the reporter, whose identity was protected by Owens.

“I’m wondering if you have any context or further comment to add about this corruption,” the email closed.

“I’m very confused by this email,” Owens responded via email, a screengrab shows. “I learned about ‘the idea that Ukraine was a corrupt country’ from The New York Times. You guys have covered the corruption in Ukraine extensively.”

“As just one example, here is a piece from the NYT Editorial Board titled, ‘Ukraine’s Unyielding Corruption,’” the conservative host wrote, linking to the Times piece.

“I educated myself about both the neo-Nazi problem in Ukraine and the unyielding corruption by reading your newspaper, not Russian state media,” she continued. “Is there something specific I said that was different form what you guys have written in the past?”

Owens didn’t stop there; she followed up her email with another email which included five links to mainstream outlets reporting on the corruption in Ukraine. Two of the five links were from the Times.

“For more good measure, here are some more past articles written from reputable sources over the past few years about the corruption and neo-Nazi problem in Ukraine,” Owens wrote in the email.

“For clarity, are you now suggesting that what the western media covered extensively over the last few years is now just Russian propaganda?” she queried. “Are you suggesting all of these articles were sponsored by Russia state media?

She also provided screengrabs of left-leaning outlets, including The New York Times, reporting on Ukraine’s well-known problem with corruption via Instagram. Here are just some of them: 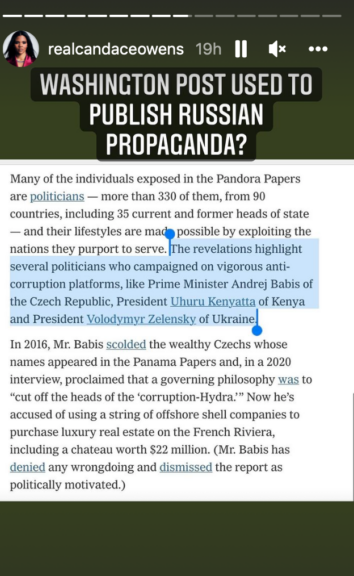 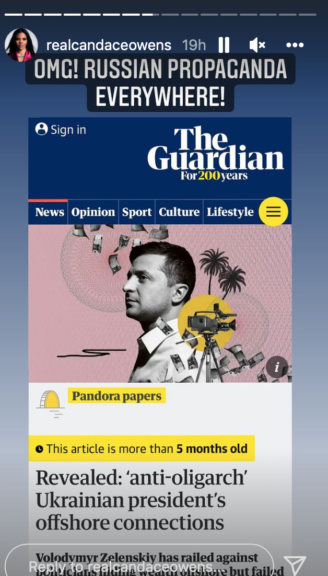 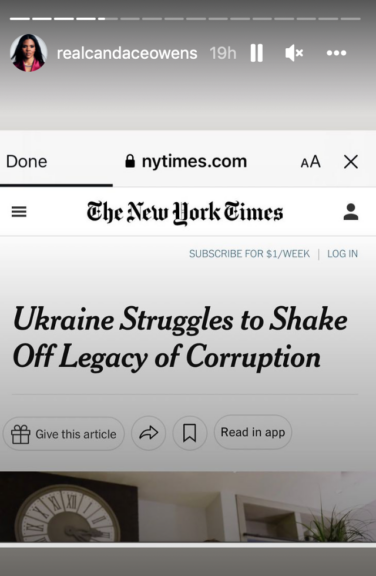 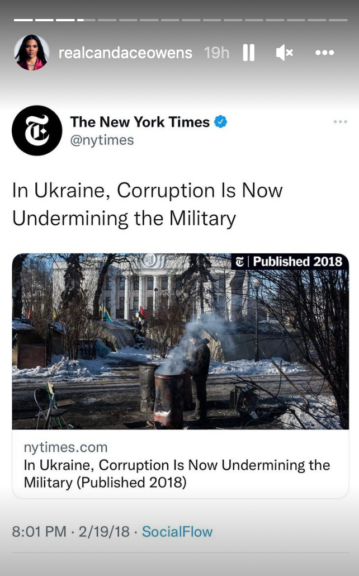