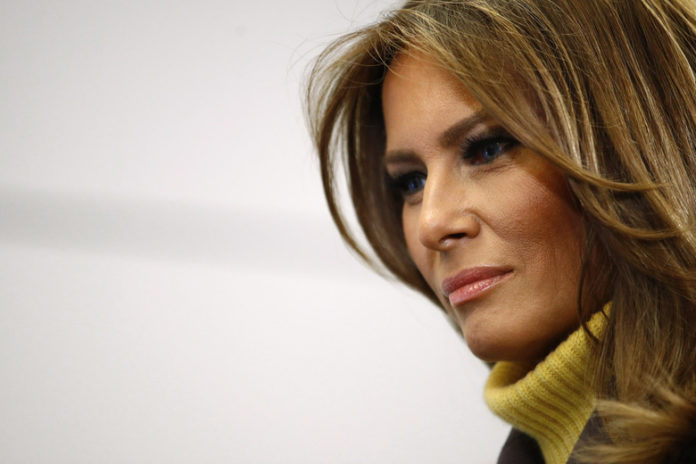 On Thursday night, in a seeming attempt to abet a hatchet job on First Lady Melania Trump from her former friend, Stephanie Winston Wolkoff, who played tapes of private conversations the two women had engaged in, CNN inadvertently made Melania look good, as the tapes clearly debunked the idea that she is not close to her husband and showed her human side, as she bemoaned all the effort needed to get ready for Christmas.

Wolkoff was on CNN to push her new book, “Melania and Me: The Rise and Fall of My Friendship with the First Lady.” In the interview, Wolkoff consistently insulted Melania and President Trump with comments such as, “You know, she’s complicit in everything that’s going on,” “We are watching our democracy turned into a dictatorship at this point. And it’s a brainwash type of cultish,” and “The traditions of First Lady and President have gone out the window with this couple.”

Wolkoff even pontificated about the recent presidential debate, “I think that after watching the debate the other evening, and how disgraceful and how upsetting it was to see our leader act in such — I don’t even have the words to express how blatantly rude it was to act that way, like to see Melania walk on stage, to smile at him and gesture at him and to be okay with that type of behavior. I mean, the most important voice right now should be Melania’s voice. She has no voice as his wife. I mean, the one woman that we need more than ever isn’t coming to the plate because she has no ability to do so.”

Despite Wolkoff’s attacks, quotes from the tapes have inspired much praise for Melania. They included Melania dismissing the claims that she doesn’t love her husband, as she stated, “Honestly, it’s like, because it’s, you know, it’s honestly, I’m doing the same stuff that I did before. They cannot stand him. They didn’t know that I’m with him.”

Wolkoff admitted, “Yes, actually she does, very much so. I mean, Melania holds a role like no other person in the White House. I mean, anyone, she doesn’t shake in her boots ever. And she tells Donald exactly how she feels. She is his biggest cheerleader. And she does believe that, if he’s going to do it, he better do it right. And you better do it with brass knuckles, and he better do it now. And those are her words.”

Speaking on the tapes of the immigrant children at the southern border, Melania stated sympathetically:

All these kids that I met, they were — they are here in the shelters because they were brought by it through coyotes. The people who were trafficking. And that’s why they put them in jail. And the kids that they go in shelters and the way they take care of them, it’s, you know, they even said the kids, they say, wow, I will have my own bed, I will sleep on the bed, I will have a cabinet for my clothes. It’s so sad to hear it, but they have — they didn’t have that in their own countries. They sleep on the floor. They are, you know — they are taking care nicely there. But, you know, yes, they are not with their parents, it’s sad. But you when they come here alone, or with coyotes, or illegally, you know, you need to, you need to do something. And a lot of, you know, a lot of like moms and kids, they are teaching how to do it, they go over and they say like, oh, we will be killed by a gang member, we will be the — you know, we will be it’s — so dangerous. So they are allowed to stay here. Do you understand what I mean?

Defending herself from charges she hadn’t done enough as First Lady, there was this exchange between the two women, which included Melania targeting the Obama administration:

Melania: They say I’m complicit, I’m the same like him, I support him. I don’t say enough. I don’t do enough.

Melania: And OK. And then I do it. And I said I’m working on Christmas planning for the Christmas. And they said, oh, what about the children? They were separated. Give me a break. Where are they saying anything when Obama did that?

Melania: I cannot go. I was trying to get the kid reunited with the mom, I didn’t have a chance, needs to go through the process and through the law.

Wofflko: But here’s my thing, here what you just said, but instead of that, if — you just — you’re messaging, you were so loved. You were.

Cooper, ignoring the pointed remark Melania made against the Obama administration, disingenuously colored her remarks this way: “It’s so interesting … hearing her being hostile toward, you know, decorating the White House for Christmas.”

Cooper segued to what he called, “that infamous jacket that she wore on her trip to the border,” adding, “Which said, I really don’t care, I think, I don’t remember exactly. But you had a conversation with her about it. Let’s play that.”

On the tape, Wolkoff said to Melania, “So what prompted you to want to buy that jacket?”

Melania answered, “I’m driving liberals crazy, that’s for sure. And that’s, you know, that’s what — and they deserve it. You understand.”

This literally makes me love Melania Trump even more. 🤣 She didn't say a single thing that's not true. Love it. But shame on her fame-seeking "friend" for betraying her privacy.

I didn’t think it was possible to like @FLOTUS more, but now I do after hearing her “friend’s” secret tape. She is a real person, doing a difficult job with grace and class while surrounded by sleazy enemies on the left, both hidden and open. Melania is awesome! pic.twitter.com/dZof2LuTFy

CNN’s “bombshell” #MelaniaTapes accidentally debunk all the rumors that she hates Trump pic.twitter.com/iwppf4sGbV