Natalie Winters at the National Pulse shared that Barack Obama had some kind of a link to the Biolabs in Ukraine.

Obama, while serving as an Illinois Senator, helped negotiate a deal to build a level-3 bio-safety lab in the Ukrainian city of Odessa.

A deleted web article recovered by The National Pulse reveals that former President Barack Obama spearheaded an agreement leading to the construction of biolabs handling “especially dangerous pathogens” in Ukraine.’

The news comes on the same day that Biden regime apparatchik Victoria Nuland told the U.S. Senate that the American government is concerned about biological research facilities falling into Russian hands as a result of the ongoing conflict in Eastern Europe.

Originally posted on June 18th, 2010, the article “Biolab Opens in Ukraine” details how Obama, while serving as an Illinois Senator, helped negotiate a deal to build a level-3 bio-safety lab in the Ukrainian city of Odessa.

The article, which also highlighted the work of former Senator Dick Lugar, was additionally included in Issue No. 818 of the United States Air Force (USAF) Counterproliferation Center’s Outreach Journal. 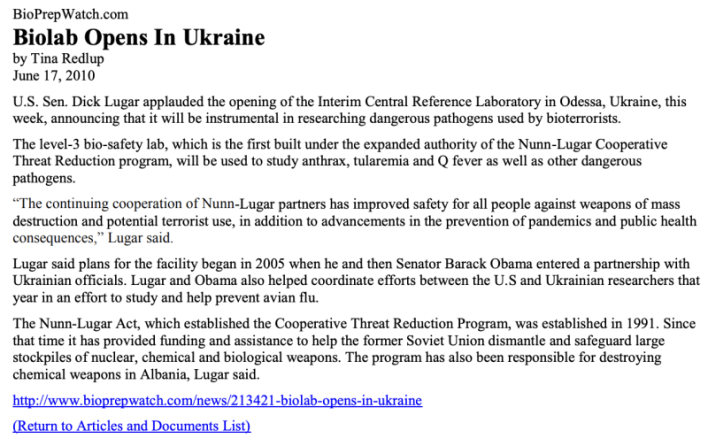 In the testimony before the US Senate, Biden official Victoria Nuland confessed that there were biological research labs in Ukraine, responding to a question from Florida Senator Marco Rubio.

Also, a Russian spokesperson said that Russia found the US biological weapons in Ukraine.