Home World USA DeSantis: Flags to Be Lowered to Half-Staff for the Late Rush Limbaugh

Florida Gov. Ron DeSantis (R) on Friday said flags will be lowered to half-staff in honor of conservative radio legend Rush Limbaugh, who passed away on Wednesday after a year-long battle with lung cancer.

“What we do when there’s things of this magnitude, once the date of internment for Rush is announced, we’re going to be lowering the flags to half-staff,” DeSantis said during an appearance in West Palm Beach on Friday.

The Republican governor released a strong statement upon the news of Limbaugh’s death, describing “America’s Anchorman” as the “greatest of all time” and someone who “busted through a media landscape in which a handful of media outlets served up pre-cooked, liberal narratives.”

“Through hard work, the will to succeed and, yes, talent on loan from God, Rush became the most dominant radio personality in American history,” DeSantis said in the statement.

“His skills behind the Golden EIB microphone were matched only by his ability to connect with his listeners across the fruited plain — the hard-working, God-fearing and patriotic Americans who were and are the subject of derision and ridicule by the legacy media,” he continued, lauding Limbaugh for providing “a fresh, conservative perspective,” attracting “millions of listers,” and paving the way “for the proliferation of conservative media.”

“Rush was no flash in the pan — he was the dominant force in radio for decades,” he continued.

“Rush is the GOAT — of radio, of conservative media and of inspiring a loyal army of American patriots,” he added. “We don’t know who will succeed Rush as America’s anchorman, but we do know that nobody will ever replace him.” 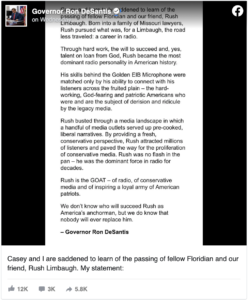 “You know, Rush is to me a second-generation founding father,” Limbaugh’s longtime producer James Golden — known as “Bo Snerdley” — said during a Thursday appearance on Hannity, honoring his friend.

DeSantis also ordered flags flown at half-staff upon the passing of late Justice Ruth Bader Ginsburg last year. In January, he did the same to honor the police victims of the January 6 Capitol protest.