Longtime Federal Prosecutor John Durham is investigating the origins of the counterintelligence investigation into the Trump campaign at the Justice Department. He is respected for his modesty and temperateness.

“John is a straight shooter,” according to Stephen Robinson. Durham was Robinson’s deputy when he was the U.S. Attorney in Connecticut from 1998 to 2001. Robinson added, “He is very careful, thoughtful, he’s methodical. It’s rare in today’s world, but he’s a person who runs away from the camera.”

Mr. Durham was appointed U.S. Attorney in Connecticut in 2018 and has been charged with “exploring the extent to which a number of countries, including Ukraine, played a role in the counterintelligence investigation directed at the Trump campaign during the 2016 election,” a spokesperson for the Justice Department said back when Durham initially was tasked with the job.

As part of his mandate, he will examine “intelligence collection activities by the U.S. government related to the Trump 2016 Presidential Campaign were lawful and appropriate.” The investigation was initiated in April of 2019.

A Justice Department official says Durham is backed by a “small team” on this matter.

Former Attorney General William Barr traveled widely during the onset of the investigation to introduce Durham to foreign officials, including those in Italy and the United Kingdom. In addition, Barr encouraged Trump to call other foreign leaders.

Durham’s investigation attracted Barr’s attention because he was appointed by Trump and believes strongly in the power of the executive. Durham doesn’t get caught up in politics, though, say those who know him.

Durham isn’t one to “start an investigation with anything other than an open mind,” according to Anthony Cardinale, a Boston lawyer who has known Durham for many years. “Particularly I don’t think he’s the kind of person [who] if somebody said to him, for example, ‘This is the result we want you to reach,’ I don’t think he’d take the job.”

According to a Justice Department official, Barr selected Durham on the basis of his “credentials.” “He has a rock-solid reputation as an investigator.”

So we come to the question, where is John Durham? How come we never see him? Is he real? Does he actually exist?

People have been asking this question for a while.

Even Trump asked about Durham and if he is real. 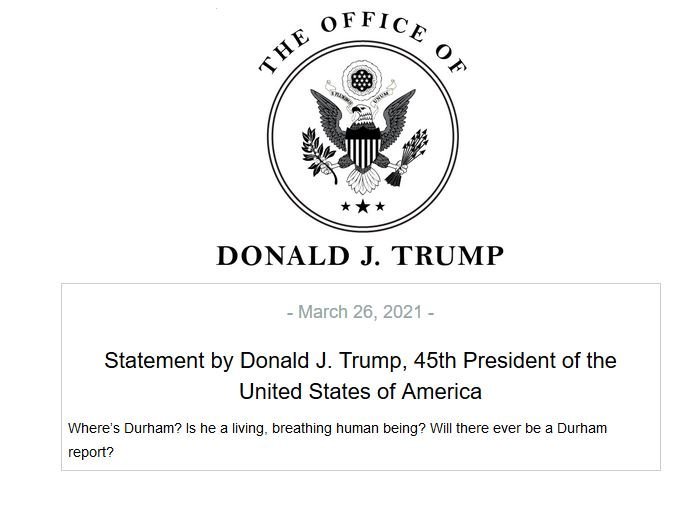 It comes down to the truth that despite being a prominent figure, John Durham does not appear very often on video. In addition, only a few photos of him are out there if you search on the internet.

Well, now there is “proof of life.”

Fox News reported about the first day of the Sussman trial.

Special Counsel John Durham’s team in its opening argument Tuesday alleged that former Clinton campaign lawyer Michael Sussmann used the FBI as “a political tool” to “manipulate” the bureau on “the eve” of the 2016 presidential election to create an “October surprise” against then-candidate Donald Trump — a plan that “largely succeeded.”

Sussmann is charged with making a false statement to the FBI when he told former FBI General Counsel James Baker in September 2016 — less than two months before the presidential election — that he was not doing work “for any client” when he requested and attended a meeting with Baker where he presented “purported data and ‘white papers’ that allegedly demonstrated a covert communicates channel” between the Trump Organization and Alfa Bank, which has ties to the Kremlin.

Now, prior to the opening argument, Durham was filmed entering the courthouse.

Even Fox News seemed enthralled by the sighting as they replayed that clip over and over again on a segment covering the trial.

People were pretty excited about the mythical figure who eludes cameras as a cheetah does turtles.

Something we don’t see very often…

John Durham out and about 👊 pic.twitter.com/rfK4hhoN42

Highlight of my day—looking John Durham in the face and saying: “TEAM DURHAM!” 🇺🇸🦅

Adding to the mystique, there were “technical difficulties” during the trial which hindered it from being viewed live.

Lunch break at the courthouse for Durham’s case against Sussmann. Jury selection process still ongoing but we should have a jury seated by end of the day. Technical difficulties in media room have meant no video/audio there, so I’ve just been note-taking in the courtroom itself.

Sussmann has pleaded not guilty to the charge.

The government argued that in bringing the “serious allegations” to the FBI, Sussmann “bypassed normal channels and went straight to the FBI’s top lawyer,” then-General Counsel James Baker.

“He then sat across from that lawyer and lied to him,” Shaw said, noting the lie was “designed to achieve political” ends, and “designed to inject the FBI into the election.”

The government, in delivering the argument, wanted to “address the proverbial elephant in the room.”

“We are here because the FBI is our institution that should don’t be used as a political tool for anyone — not Republicans, not Democrats, not anyone,” Shaw said, urging jurors to leave their own “political views” out of the decisions they make in the courtroom.

The government said the evidence presented throughout the trial will show that “the lie” was part of a “bigger plan,” one to “create an October surprise on the eve of the presidential election.”

“A plan that used and manipulated the FBI. A plan that the defendant hoped would trigger news outlets and trigger an FBI investigation,” Shaw said. “A plan that largely succeeded.”

The government plans to discuss details of Sussmann’s meetings with the opposition research firm the Clinton campaign hired to dig up dirt on the Trump campaign — Fusion GPS.

So, now we know, Durham is real, and he’s about to open a real can of whoop ass on some traitors.