Last Friday we got to see the affidavit, albeit a heavily redacted affidavit, that was used to justify the raid on Trump’s Mar-a-Lago home.

After much battling over the affidavit’s release – Trump hoped it would show how he hadn’t been proven guilty of breaking laws governing presidential records and classified documents, but the DOJ didn’t want to unseal it because it could reveal tactics and identities of agents, etc – a federal judge ordered the Justice Department to unseal it. 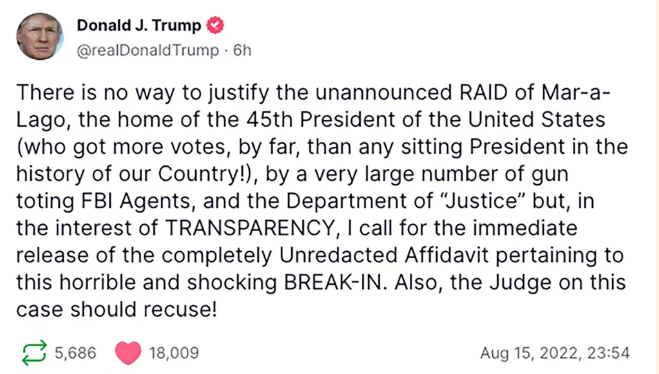 We read how the FBI said that boxes of materials from Trump’s White House being stored at his home may contain top secret or classified documents. The FBI agent stated “this affidavit seeks authorization to search the “45 Office” and all storage rooms and any other rooms or locations where boxes or records may be stored within the PREMISES.”

The FBI did just that, and in doing so, confiscated documents that they shouldn’t have.

And Trump called them out.

“The political Hacks and Thugs had no right under the Presidential Records Act to storm Mar-a-Lago and steal everything in sight, including Passports and privileged documents,” he posted on Truth Social. 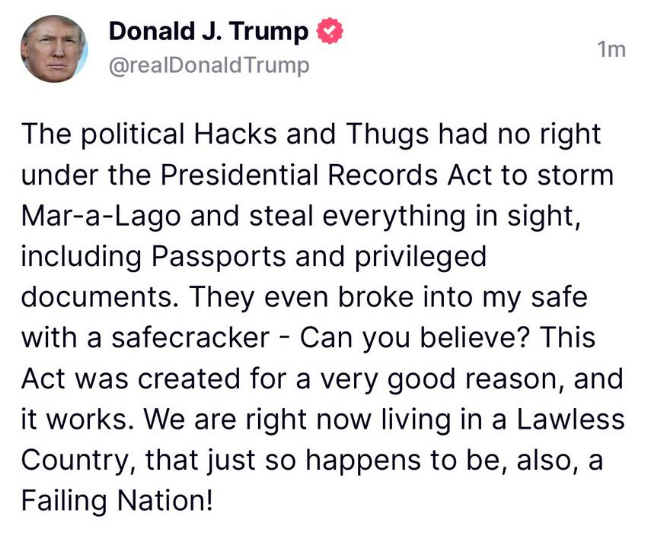 And now the DOJ “has admitted that some of the documents they took from the former president’s home rightfully belong to him,” according to the Conservative Brief.

U.S. District Judge Aileen Cannon, who is considering appointing a special master to review the documents taken from Trump’s private residence, ordered the Department of Justice to file “a more detailed Receipt for Property specifying all property seized” under seal and said that she wanted to know “the status of Defendant’s review of the seized property, including any filter review conducted by the privilege review team and any dissemination of materials beyond the privilege review team,” NBC News reported.

The Department of Justice admitted in its filing on Monday that it “identified a limited set of materials that potentially contain attorney-client privileged information, completed its review of those materials, and is in the process of following the procedures” that are in the affidavit for a search warrant “to address potential privilege disputes, if any.”

In her decision on Saturday, Judge Aileen M. Cannon from the Southern District of Florida said that she based her decision on both the former president’s attorneys’ submissions and “the exceptional circumstances presented,” Fox News reports.

A hearing is set for Sept. 1 at 1:00 p.m. in West Palm Beach, Fla. Cannon also ordered the Justice Department to file a response by Aug. 30 and provide, “under seal,” a “more detailed Receipt for Property specifying all property seized pursuant to the search warrant executed on August 8, 2022.”

The current property receipt shows that FBI agents took approximately 20 boxes of items from the premises, including one set of documents marked as “Various classified/TS/SCI documents,” which refers to top secret/sensitive compartmented information.

Records covered by that government classification level could potentially include human intelligence and information that, if disclosed, could jeopardize relations between the U.S. and other nations, as well as the lives of intelligence operatives abroad. However, the classification also encompasses national security information related to the daily operations of the president of the United States.

“District Court Judge Aileen Cannon in the Southern District of Florida ordered Trump’s lawyers to elaborate on their arguments for why the court has the ability to step in at this time, explain what exactly Trump is asking for and whether the Justice Department has been served with Trump’s special master motion,” CNN reported prior to this.

“Cannon also asked Trump’s team to weigh in on any effect the request might have on a separate review conducted by a magistrate judge into whether any portions of the still-sealed FBI affidavit laying out a probable cause for the search can be released,” the report continued.

Last week, Trump requested that a “special master” review documents obtained from Mar-a-Lago rather than the Justice Department.

“The request for a so-called special master to review the documents could be filed as soon as Monday in Florida, the person said, requesting anonymity because the matter isn’t public. Trump also plans to ask for a court order requiring the Department of Justice to provide more details about the property that was seized and to return materials that weren’t covered by the warrant, the person said,” according to Bloomberg News.

Trump had previously asserted that some of the records taken from his Mar-a-Lago resort were protected by the attorney-client privilege.

Federal Bureau of Investigation agents carted away about 20 boxes containing 11 sets of classified documents — some of them labeled top secret — following the Aug. 8 search. Trump’s passports have already been returned, and it’s unclear what documents the former president claims are protected by the privilege.