More
HomePoliticsDOJ ‘mistakenly’ exposes list of Trump files from Mar-a-Lago Including notes on...

A number of files taken during the FBI search on former President Trump’s Mar-a-Lago estate have been “inadvertently” published online by the Department of Justice. Inadvertently either indicates that DOJ personnel are utter idiots or that it was done intentionally as a hidden threat to Trump that they may act against him without consequence.

Trump requested a Special Master to oversee the case of the documents collected by the FBI in the August raid on his Mar-a-Lago property, which was unusual.

Trump’s demand was granted by a judge he nominated, despite the fact that leftist legal analysts deemed it atrocious that he was granted his request and that the judge was wicked for aiding Trump in the case.

The records, which Trump’s attorneys are seeking to conceal from government investigators, contain correspondence regarding presidential pardons towards the conclusion of Trump’s tenure. Documents released by the Department of Justice included discussions on the pardon of former Illinois governor Rod Blagojovich.

According to the U.K.’s Daily Mail, despite a judge’s order that the records be kept secret and under seal, DOJ employees placed them “on a government court docket where they are no longer accessible,” either by accident or on design.

“A document called ‘The President’s Calls’ has note reading, ‘Message from Rudy,’ a possible reference to former Trump lawyer Rudy Giuliani, who is a target in the Georgia election probe and was involved in Trump’s election overturn effort,” the Mail reported.

The document does not, ‘on its face,’ appear to be related to legal advice, according to the sealed memo.

One note with typos says ‘Joe DeGernova Appoint Special Councel [sic],’ which could indicate Joe DiGenova, the former U.S. attorney who appeared with Rudy Giuliani at an infamous RNC press conference after the election.

It also includes a ‘Post-it note ‘from Cleta Mitchell,’ who is a Washington lawyer who advised Trump during the overturn effort during his last weeks in office.

Other documents refer to pardon and commutation discussions using only initials of the people being considered. Trump went on a pardon spree during his last weeks in office. 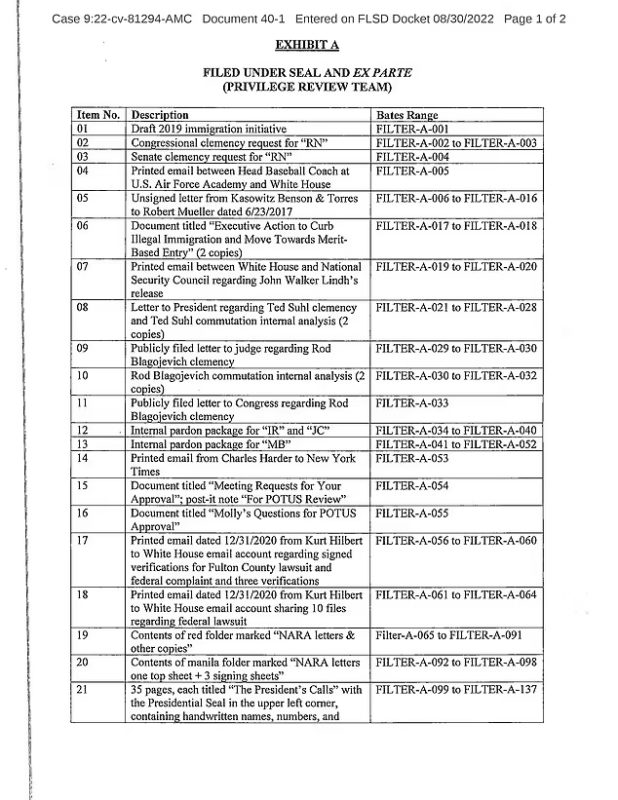