Donald Trump Finds Smoking Gun That Destroys Case Against Him

Letitia James, the radical, social justice-obsessed attorney general of New York state, has been revealed as a failure who has repeatedly failed in her attempts to scalp President Donald J. Trump. If Trump is correct in his recent court filings, this new attempt by the crazy AJ may not be an anomaly.

Trump claims he informed individuals in public legal documents given to investors of the same things James is attempting to persuade the country Trump was trying to conceal in her current attempt to take him down by saying he engaged in dishonest business practices.

James accused Trump of routinely exaggerating the value of his properties in order to secure hundreds of millions of dollars in bank loans and tax breaks; she wants a judge to order $250 million in penalties and to prohibit the Trump family from selling, purchasing, collecting rent, or borrowing in New York.

The outcome is in no way certain. Trump has many choices for responding to the overtly partisan acts of the radical left AG.

Trump’s financial documents were published last week as part of James’ fraud case against him, which has all been ridiculed in the court of public opinion, embarrassing the disgraced James as a fanatical social justice fighter.

Trump recently told Fox News anchor Sean Hannity that his financial disclosures to investors free him of accountability and that the Attorney General has “no case.”

Italiano provided the details and added:

“Donald Trump hunched forward in his gold-painted, spindle-backed chair under the chandeliers of Mar-a-Lago’s glittering grand ballroom and told Sean Hannity why New York’s attorney general, who’d sued him earlier that day, has “no case.”

“We have a disclaimer,” Trump told the Fox News host.

“Right on the front. And it basically says, you know, get your own people. You’re at your own risk … It may be way off.” 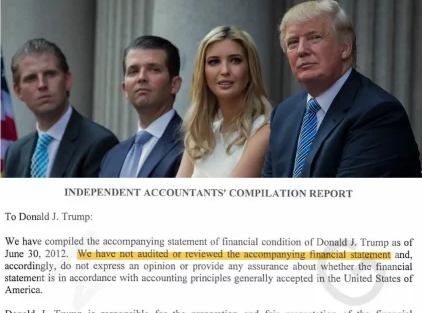 Trump was describing the disclaimer that fills the second and third pages of his annual proclamations of net-worth — the 20-page “Statements of Financial Condition” at the center of AG Letitia James’ massive lawsuit against the former president, his three oldest kids, and his real estate and golf resort empire. CONTINUE READING…