The radical left has no respect for working people, often minimizing their contributions to society in favor of ideas that force more centralized power in government- with their fantasies that a ‘daddy government’ wil supply a basic and ‘fair’ standard of living to everyone, instead of getting behind the idea that people can work for and earn their living.

A recession is a period when the economy shrinks instead of grows. After the initial shock of the coronavirus pandemic, the U.S. economy contracted due to shutdowns and mass layoffs and fell into a recession.

And at least one person, who is known as a warrior worker, has a very strong opinion about why such a thing would be good, and how a US recession would send people back into work and get their work ethics back in order.

Elon Musk, recently said that he does believe that a recession is coming, and it will last about 12-18 months. This, according to Musk, is a good thing, however, as it could get rid of some companies that need to go anyway- so to him- it is all good.

Elon Musk said a recession would be ‘good’ for the economy because it’ll hurt work-from-home fans and ‘foolish’ business owners he believes deserve to go bankrupt.

The Tesla billionaire, 50 – who is worth $218billion – has never been shy about sharing his opinions on Twitter and said he thought a recession would be a ‘good thing’ when asked on Thursday.

‘[Recession] actually a good thing,’ he tweeted. ‘It has been raining money on fools for too long. Some bankruptcies need to happen.

‘Also, all the Covid stay-at-home stuff has tricked people into thinking that you don’t actually need to work hard. Rude awakening inbound!’

Musk may be referencing the multiple rounds of stimulus that was offered during the height of the pandemic to both businesses and people and the increasing amount of office workers who prefer to work from the comforts of their own home.

He has long boasted of his ferocious worth ethic and is well-known to drive his staff extremely hard.

Musk warned staffers at Twitter he’d work them to the bone when the deal closes – but insisted he’d still work harder.

Thursday’s tweet also suggests Musk will force the San Francisco-headquartered firm’s workforce back into its offices, despite previously calling for it to be converted into a homeless shelter.

The SpaceX founder also said he thought the recession would last ‘about 12 to 18 months,’ based on historical recessions, he said on the social platform.

‘Companies that are inherently negative cash flow (ie. value destroyers) need to die, so that they stop consuming resources,’ he continued. 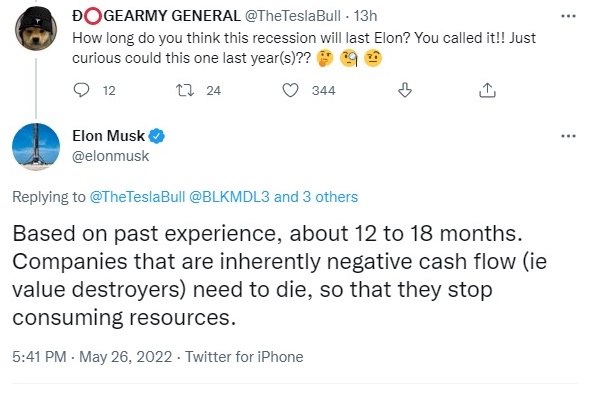 The question came after asset management company BlackRock warned that the IRS could raise interest rates to offset inflation, which could lead to a recession.

‘The Fed’s hawkish pivot has raised the risk that markets see rates staying in restrictive territory,’ the company said, according to Fox News. ‘The year-to-date selloff partly reflects this, yet we see no clear catalyst for a rebound.

‘If they hike interest rates too much, they risk triggering a recession. If they tighten not enough, the risk becomes runaway inflation. It’s tough to see a perfect outcome.’

The entire debate on the recession came after the Met Gala attendee posted a poll asking: ‘Who do you trust less? Real question. Politicians or Billionaires.’

Not one to shy away from a political stance, he tweeted: ‘@aoc I dare you to run the same poll with your followers.’

The comment comes after Cortez, 32, announced plans to ditch her Tesla, weeks after Musk told her to stop flirting with him on Twitter.

The Green New Deal-backing politician told Bloomberg in an interview Wednesday that she wants to switch to an electronic car that is made domestically by unionized workers.

Currently, the only such vehicles she could consider are Ford’s huge F-150 Lightning truck, which will be released later this year, or a Chevy Bolt.

On Thursday, Musk criticized Democrats like AOC for being ‘controlled’ by the unions and said: ‘It’s like watching a sock puppet “talk,” but the hand inside the sock is way too obvious!’

Tesla workers are not unionized.

AOC went on to tell Bloomberg that she purchased her Model 3 in 2020 around the time that the COVID-19 began.

SHe said that it was the only electric car that could get her from her Bronx-Queens district to the nation’s capital on ‘one or one-and-half charges.’

Now the proud member of the squad said ‘I would love to switch.’

AOC claimed it was because she wants to support a manufacturer with a unionized production line, but her timing has raised questions.

“He’s a billionaire. I could care less what he thinks,” Ocasio-Cortez said.

A billionaire who can afford food- and who earned his money by working for what he has.