The left is not accustomed to having its political heroes fact-checked on Twitter, as was the case over the weekend with Democrat Joe Biden’s absurd tweets.

In the past, presidents were regarded a reliable source for delivering information to the American people; but, it may not be such a terrible idea to have a committee of citizens fact-check them, especially when it comes to Biden and the Democrats.

“Evidently, it’s a new era at Twitter because the social media platform fact-checked President Joe Biden’s official presidential account after he told a whopper so big concerning corporations not paying taxes that even they had to call him out over it,“ Bizpac reported, adding more details:

“Let me give you the facts. In 2020, 55 corporations made $40 billion. And they paid zero in federal taxes. My Inflation Reduction Act puts an end to this,” Biden stated, telling an egregious lie.

“The tweet contains context added by users who pointed out that Biden’s Inflation Reduction Act imposed a minimum tax on corporations with average pre-tax earnings greater than $1 billion.

The Inflation Reduction Act was signed into law in August 2022 and it imposes a 15 percent minimum corporate tax for companies earning more than $1 billion per year.

Let me give you the facts,” Theresa Monroe Hamilton wrote, adding details:

My Inflation Reduction Act puts an end to this.

Let me give you the facts.

My Inflation Reduction Act puts an end to this. 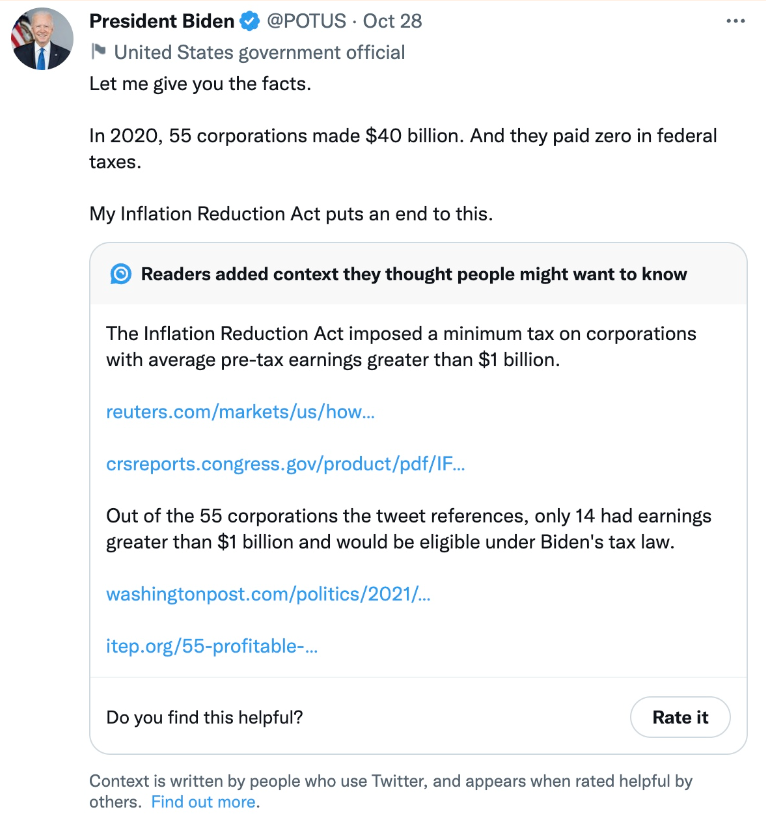 Fourteen of the firms cited by the president in his tweet had earnings in excess of $1 billion, making them eligible under Biden’s tax plan. It should be emphasized that these huge firms were already paying taxes prior to the implementation of the taxation obligation.

This same legislation allocated $80 billion to the Internal Revenue Service over a decade. More than half of these monies are earmarked for the hire of 87,000 additional agents and employees to combat tax evasion. Biden did not address the reality that the majority of people audited will be hardworking Americans in his tweet when he raged against big corporations.

Midterm elections are only a week out, so overblown political hyperbole is rampant. Biden leads the way in fibbing to help Democrats gain traction as they are widely expected to get hammered in the elections across the nation.

He either rants about “ultra-MAGA extremists” or brags about his own accomplishments in an effort to make Democrats look more competent. His efforts have had the exact opposite result. CONTINUE READING…