The anti-America First movement, which has been weaponized within the United States Government, has evidently made The Gateway Pundit (GWP) a target due to its brutally honest coverage of the news and events that affect the majority of Americans.

And for years, these anti-American players have had the ability and resources to stifle free expression and prevent the news media from informing the American people.

Clearly, given the volume of traffic that leading media platforms like GWP get, they were targeted for destruction of public communications.

Remember that one of the first strategies in warfare is to disrupt the enemy’s communication. This resembles the following GWP narrative somewhat.

“With the recent release of “Twitter Files 6,” avid Gateway Pundit readers and listeners of my podcast know that we have been discussing these very “portals” of government and non-profit censorship that have existed within Twitter and other social media platforms for non-profits like the EIP/CIS/EI-ISAC and government agencies to use for months in order to censor American citizens,” Brian Lupo reported for The Gateway Pundit, adding:

“Dr. Shiva Ayyadurai has been talking about the EI-ISAC and CIS since early 2021 when he discovered these connections during his lawsuit against Massachusetts over his election “loss”.

ToreSays has also been talking about the DHS contracts with the EI-ISAC/CIS for perhaps even longer.

It wasn’t just the EI-ISAC or CIS, though, that was colluding with social media platforms and other cohorts alike to censor the American people during the 2020 election. There were household names as well. Non-profits most of us would recognize: Common Cause, the NAACP, Defending Digital Democracy, MITRE, the National Conference on Citizenship, but perhaps, most notably, the AARP.”

“The EIP was not only using teams of federal agents and government election officials to censor the American public, they were also encouraging and recruiting retired senior citizens to do the same. So much for “professional fact checkers.” 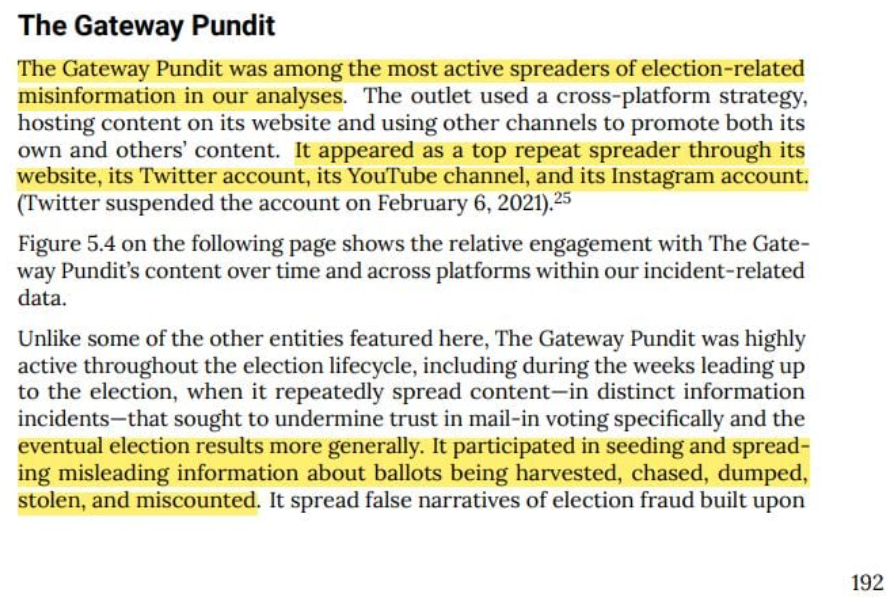 The Gateway Pundit is back! Thank you @elonmusk pic.twitter.com/sNXpHnkwBG

The Gateway Pundit was suspended from Twitter back in February 2021 for spreading “misinformation”: Open Records CCTV footage requested and paid for of a van dropping off 60+ boxes of ballots in the back of the TCF Center in Detroit around 3:30am and 4:30am. CONTINUE READING…