Trump is rightfully incensed over the raid of his Mar-a-Lago home by the FBI, yet there is a bright side to the incident.

After his home was raided early in August, Trump posted on Truth Social: ‘These are dark times for our Nation, as my beautiful home, Mar-A-Lago in Palm Beach, Florida, is currently under siege, raided, and occupied by a large group of FBI agents.’

‘Nothing like this has ever happened to a President of the United States before.’

‘After working and cooperating with the relevant Government agencies, this unannounced raid on my home was not necessary or appropriate.’ 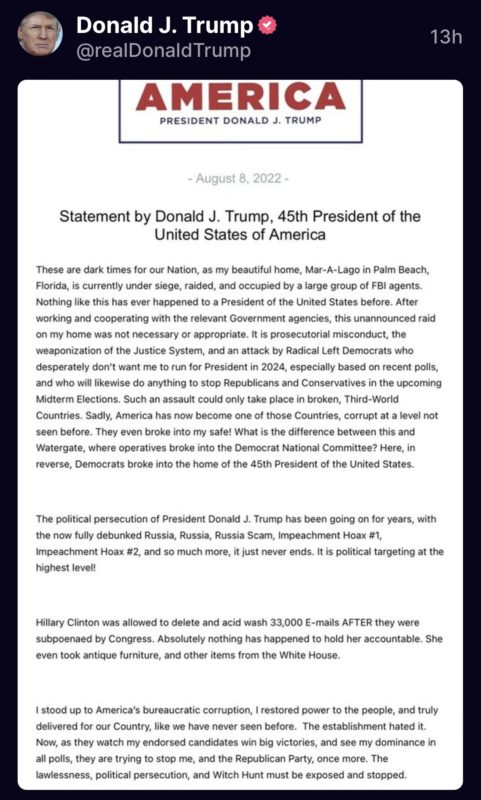 In a new statement, Trump revealed that among the seized items were his medical records, which show he is in excellent health.

“Not only did the FBI steal my Passports in the FBI Raid and Break-In of my home, Mar-a-Lago, but it has just been learned through court filings that they also improperly took my complete and highly confidential medical file and history, with all the bells and whistles (at least they’ll see that I’m very healthy, an absolutely perfect physical specimen!), plus personal Tax Records (Illegal to take), and lawyer/client/privileged information, a definite NO, NO. Days of the Soviet Union!” Trump posted. 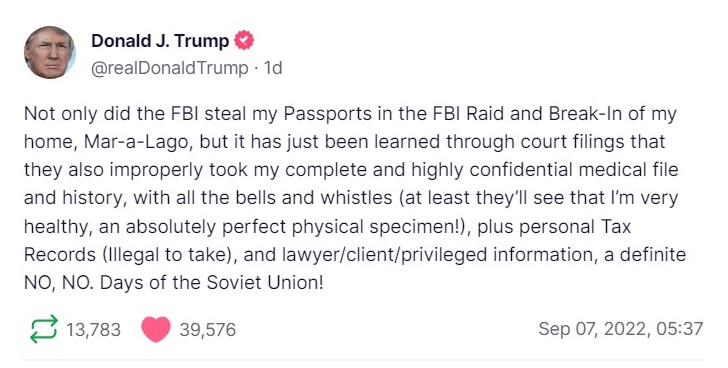 Prior to winning the 2016 election, a letter from Trump’s personal doctor was released, and it stated:

To Whom It May Concern:

I have been the personal physician of Mr Donald J. Trump since 1980. His previous physician was my father, Dr Jacob Bornstein. Over the past 39 years, I am pleased to report that Mr Trump has had no significant medical problems. Mr Trump has had a recent complete medical examination that showed only positive results. Actually, his blood pressure, 110/65, and laboratory test results were astonishingly excellent.

Over the past twelve months, he has lost at least fifteen pounds, Mr Trump takes 81 mg of aspirin daily and a low dose of a statin. His PSA test score is 0.15 (very low). His physical strength and stamina are extraordinary.

Mr Trump has suffered no form of cancer, has never had a hip, knee or shoulder replacement or any other orthopaedic surgery. His only surgery was an appendectomy at age ten. His cardiovascular status is excellent. He has no history of ever using alcohol or tobacco products.

If elected, Mr Trump, I can state unequivocally, will be the healthiest individual ever elected to the presidency.

There was some skepticism in the press about the claim that Trump would be “the healthiest individual ever elected to the presidency.” A few years later, Doctor Bornstein said that Trump dictated the contents of the letter to him. Still, Trump’s stamina and energy shocked many as he appeared to truly be one of the healthiest presidents, especially compared to Biden.

According to the U.K.’s The Independent at the time, Bornstein’s “claims come after a separate interview with NBC News, in which the doctor claimed his offices were “raided” by authorities in 2017 and Mr Trump’s medical records had been seized.”

The Manhattan-based Dr Bornstein had been Mr Trump’s personal physician for more than 35 years before he took office as president in 2017.

However, she said taking medical records is standard operating procedure for a new president, and disputed the characterisation of the incident as a “raid.”

In its raid on the Trump estate at Mar-a-Lago last month, the FBI came up short, says a former top spy.

John Ratcliffe, who Trump appointed as Director of National Intelligence (DNI), said on Fox News last week that the FBI “didn’t find what they were looking” for, based on his assessment.

Ratcliffe, who represented Texas’s 4th district from 2015 to 2020 told Fox, “I was a former federal prosecutor, United States attorney. Let me tell you what this is about. Good prosecutors with good cases play it straight. They don’t need to play games.” His statement was in reference to DOJ officials. “They don’t need to shop for judges, they don’t need to leak intelligence that may or may not exist.”

In opposing the appointment of a special master to review allegedly classified documents, the Justice Department “tells you that the government didn’t find what they were looking for,” Ratcliffe added.

“There weren’t nuclear secrets” on Trump’s property, he continued, “and they’re trying to justify what they’ve done. They’re not playing it straight before the American people. I think that that’s going to play out.”

Former federal prosecutor Andrew McCarthy told Fox News that Cannon’s ruling had the capacity to be “potentially explosive” in the event that it led to an executive privilege claim.

“It’s a big win for the Trump team and a potentially explosive ruling if it holds. I would imagine it’s important enough that the government will appeal this immediately,” he told Fox News.