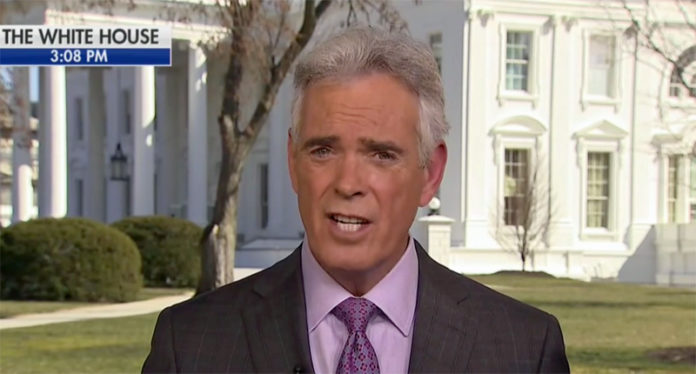 Fox News chief White House correspondent John Roberts may have succeeded where Donald Trump and his team have struggled when it comes to flipping the narrative on the “white supremacy” issue in favor of the president.

She answered his question squarely, yet Roberts was unwilling to accept her response and became angry on air when discussing the exchange afterward on Fox News.

“For all of you on Twitter who are hammering me for asking that question — I don’t care,” Roberts declared during a live shot from the North Lawn of the White House.

“Because it’s a question that needs to be asked, and clearly, the president’s Republican colleagues a mile away from here are looking for an answer for it too. So stop deflecting, stop blaming the media.

“I’m tired of it.” he added, clearly very miffed.

Moments ago, @PressSec told White House reporters that President @realDonaldTrump's record on denouncing and combatting white supremacy "is unmistakable," and it's "shameful that the media refuses to cover it." pic.twitter.com/uqfB9zGKwF

Let’s look at his back and forth with McEnany more closely.

“I’d like to ask you for a definitive and declarative statement, without ambiguity or deflection: As the person who speaks for the president, does the president denounce white supremacism and groups that espouse it in all their forms?” Roberts asked.

“I’ve always denounced any form of that,” she quoted Trump saying.

.@PressSec blows the idea that President Trump hasn’t denounced White Supremacy out of the water. pic.twitter.com/DJ9PYV7FPo

The only reason Trump even mentioned the Proud Boys by name at the debate is because Democratic nominee Joe Biden brought them up first.

“[A]re you willing tonight to condemn white supremacists and militia groups and to say that they need to stand down and not add to the violence in a number of these cities as we saw in Kenosha and as we’ve seen in Portland?” debate moderator Chris Wallace asked.

Putting aside the “Are you still beating your wife?” implications of the loaded, biased question, Trump responded clearly.

“Sure, I’m willing to do that,” the president said, then asking which group Wallace would like him to condemn.

“Proud Boys, stand back and stand by,” Trump said, turning toward Biden and employing the same “stand down” language Wallace had used in the question.

A reporter asked the president on Wednesday at the White House what he meant when he said the Proud Boys should “stand back and stand by.”

“I can only say they have to stand down. Let law enforcement do their work,” he added.

The president was also asked whether he denounced white supremacists more broadly.

“I’ve always denounced any form of any of that,” he said.

McEnany pointed out on Thursday that Trump “has condemned white supremacy more than any president in modern history.”

“You’re contriving a story line and a narrative,” she said to Roberts.

He didn’t accept the response, following up, “Can you right now denounce white supremacy and the groups that espouse it?”

“I just did,” she answered.

“You read a bunch of quotes from the past,” he shot back.

The past? Among other quotes, she included what he said at the debate and on Wednesday to reporters. How much more recent is necessary?

McEnany also pointed out to Roberts that the president designated both the Ku Klux Klan and antifa as domestic terror groups last week while introducing his black empowerment “Platinum Plan” during a speech in front of a group of African-American supporters in Atlanta.

“His record on this is unmistakable and it’s shameful the media refused to cover it,” she said.

Roberts’ line of questioning and his angry response afterward were bizarre.

The establishment media, Joe Biden, House Speaker Nancy Pelosi and the Democrats have been labeling Trump a racist for years, as they did with George W. Bush and Ronald Reagan before him.

This most recent push, assisted by Roberts, may have succeeded in finally flipping the narrative so the American people say, “Enough of the silliness. We can judge for ourselves if Trump is a racist.”

His record of lifting up people of all races is clear.

If Trump is a racist, he’s not very good at it.