At the same time regular Americans are hearing the phrase “Monkeypox”, they are finding out that the established order in Washington DC has been familiar for over a year- not only- with the illness, but also with how to make money off of the illness, in the form of a vaccine.

We can’t even make this up. After years of hearing about COVID-19, national attention has shifted to Monkeypox, and investigators are exposing evidence that an elite group of politicians and medical people had prior knowledge of everything we are not just learning.

Democrat Joe Biden said recently that he didn’t believe quarantines to prevent the spread of monkeypox in the U.S. would be necessary- but it is important- here- to know that Biden is connected with the vaccine for illness.

Biden, denying that the US needed such drastic measures, said the U.S. has enough vaccine doses available to stop any serious outbreaks and to “deal with the likelihood of the problem,” according to The Washington Post.

“I just don’t think it rises to the level of the kind of concern that existed with COVID-19, and the smallpox vaccine works for it,” Biden said during a news conference in Japan.

The World Health Organization has identified monkeypox cases in at least a dozen countries where the disease isn’t typically considered endemic. Generally found in Central and West Africa, the illness has been reported in several European countries, as well as the U.S., Canada, and Australia.

On Sunday, Biden told reporters that monkeypox is a “concern in that if it were to spread, it would be consequential.” Administration officials have said the president has been briefed on the disease, the newspaper reported.

Monkeypox spreads through droplets and bodily fluids but doesn’t pass easily between humans and is less contagious than the coronavirus, the Post reported. The CDC has reported that the smallpox vaccine is 85% effective against monkeypox, and the U.S. has licensed two smallpox vaccines that could help in potential outbreaks, including one that specifically targets monkeypox.

Belgium is the first country to put a mandatory 21-day quarantine in place for monkeypox patients as cases spread globally, according to CNBC. Health authorities announced the quarantine on Friday after the country recorded its third case.

The quarantine only applies to patients with a confirmed infection. Close contacts aren’t required to self-isolate but are encouraged to be careful and watch for symptoms, especially if they spend time with vulnerable people who could contract a serious illness, CNBC reported.

The U.K. has published guidelines to assess risks of monkeypox infection and provide guidance on self-isolation and monitoring. Health officials have said that those who have high exposure risks should self-isolate for 21 days, which includes household contacts or medical professionals who have worked with infected patients.

As of Saturday, the WHO has received reports of 92 confirmed monkeypox cases and 28 suspected cases across 12 countries where the virus isn’t typically found. No deaths linked to the cases have been reported so far.

And would it surprise anyone to find out that Biden is connected to those vaccine makers?

National File reported on the connections::

“The University of Pennsylvania is being paid by Bavarian Nordic,” the 2014 document states. Biden joined UPenn after leaving the vice presidency in 2017. Anthony Fauci used approximately $100 million in U.S. taxpayer funds to pay Bavarian Nordic for the vaccine and the Biden administration has used over $100 million in taxpayer funds to buy the monkeypox vaccines.
As I also reported, the University of Pennsylvania makes massive money off Coronavirus vaccines. UPenn gets paid by Pfizer’s vaccine partner BioNtech in licensing payments for mRNA technology and UPenn even makes more money if Pfizer-BioNTech sells more vaccines and gets more FDA approvals from the Biden administration, thanks to a deal UPenn made in 2018 when Biden worked for the university.

Here is the University of Pennsylvania document for the Hospital of the University of Pennsylvania that invites people to participate in a research study called “Randomized, open-label Phase II trial to assess the safety and immunogenicity of MVA-BN® smallpox vaccine when increasing the number of injections compared to the standard regimen in immunocompromised subjects with HIV infection…” 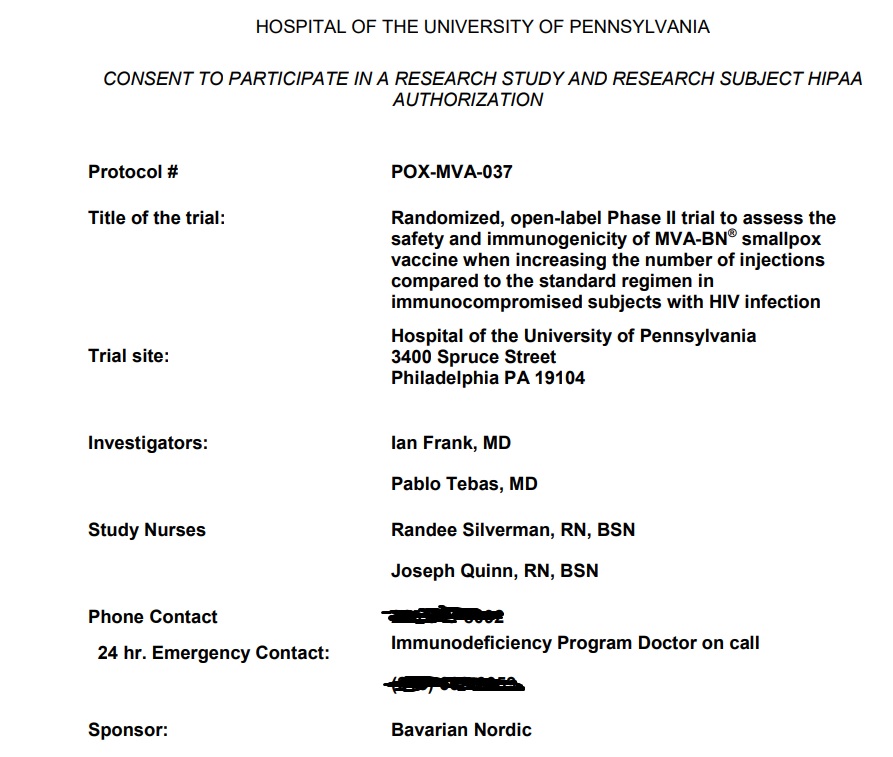 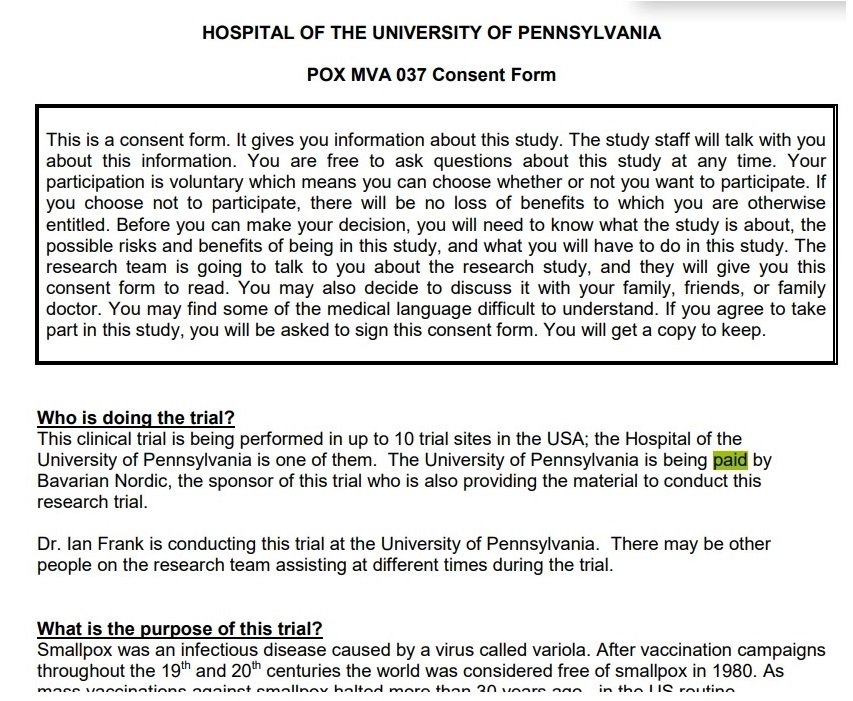 The National File article exposes many other links between Biden and the Vaccine makers, which begs the question of what the vaccine makers knew and when they knew it?