Hunter’s Pal Sounds Alarm On The Truth About Joe Biden

Yesterday we learned that the federal probe into Hunter Biden “appears to be coming to a head,” according to a newly released report.

The New York Times reports in Tuesday’s edition that prosecutors are discussing whether to press ahead with the high-profile case after examining Biden’s tax returns and foreign consulting work.

In the upcoming months, the Justice Department is expected to decide whether to bring criminal or civil charges, or whether to attempt to reach a settlement with a “significant fine,” according to the report, which notes that close confidants of the president favor a settlement if prosecutors seek to prosecute his 52-year-old son. In any case, Attorney General Merrick Garland will make the final decision.

The Justice Department was contacted by several news organizations for comment on the report. The New York Times reported that several attempts to contact Biden through his lawyer proved unsuccessful. The remainder of the report focused on Kevin Morris, a prominent Hollywood lawyer who lent Biden over $2 million to pay back his taxes and support his family, as well as his role in legal and media strategy.

Federal investigators have been looking into Biden’s finances, including millions of dollars worth of transactions and money transfers linked to countries like Ukraine, China, and Russia, starting in 2018.

The report states that some of the files on the laptop believed to belong to Biden are being investigated for “possible violations of tax, money laundering and foreign-lobbying laws.”

Throughout the last few months, a Wilmington grand jury has been compiling evidence. An eyewitness was even asked to identify the “big guy” mentioned during conversations concerning Biden’s Chinese business deal, according to the New York Post in early April.

Sources told the news outlet that a piece of evidence presented to the grand jury for this individual prompted the question. Although the answer was not revealed, some have claimed the “big guy” is President Biden, raising the possibility of Biden being subjected to a federal criminal investigation.

According to The New York Times, the president’s allies are uncomfortable with Hollywood lawyer Kevin Morris’ plan to mount an aggressive public defense of Hunter Biden. This includes questioning the truth behind The New York Post’s exclusive disclosure of his infamous laptop, published in October 2020.

Additionally, they are troubled by Morris’ loan of more than $2 million to pay down Hunter’s debts and fund his living expenses. The loan may echo the cash Hunter received as he served on the board of a Ukrainian oligarch’s company and pursued deals with a Chinese tycoon, the Times said.

The Times reports Joe Biden’s supporters want Hunter out of the spotlight and to settle a federal grand jury investigation in Wilmington, Delaware, without facing trial if charges are filed.

Recently, it was revealed that Morris is working on a documentary about Hunter Biden, because he has been in the news for his business affairs, and he was accused of spying on an independent film, “My Son Hunter,” which is slated to give a negative portrayal of the Biden family.

In an effort to undermine the film and the laptop, Morris may use footage from the film’s set in Serbia, according to the Times.

A picture of Morris with a videographer in November appeared in The Post, which captured the first son and his wife leaving Hunter Biden’s exhibit at the Georges Berges Gallery in New York’s Soho neighborhood. 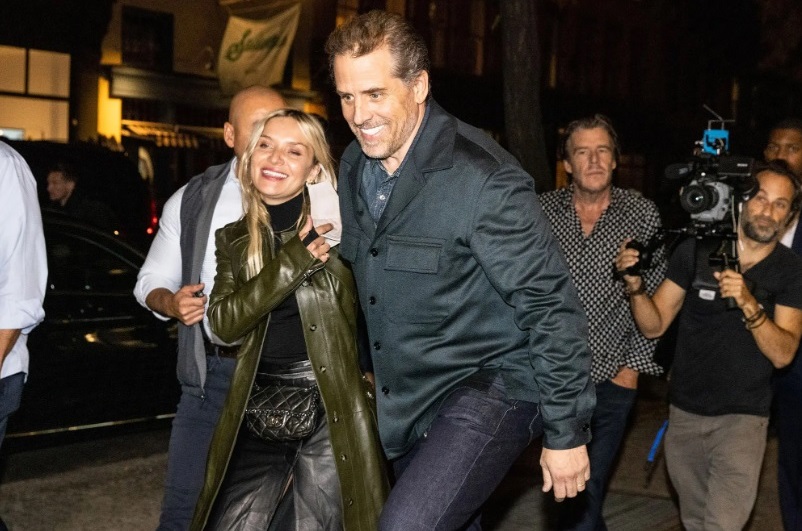 According to the Times, who cited two people with knowledge of his collection, Morris is an art collector who owns a few pieces by Hunter Biden.

The White House has been questioned about possible influence peddling regarding the sale of Hunter’s artwork and said the Georges Berges Gallery agreed not to reveal the identity of all purchasers from either Hunter Biden or the White House.

According to a source, Morris may have received her artwork from Hunter Biden as a gift.

During their friendship, Morris, 58, developed what the Times described as almost a paternalistic bond with Hunter Biden, 52.

Morris, a novelist, and short-story writer, supposedly helped Biden finish his memoir in which he detailed his drug and alcohol addictions, as well as an affair with the widow of his brother.

Pelosi Lets It Slip: Immigrants Should Be Picking Crops

Aconsortium of four private groups worked with the departments of Homeland Security (DHS) and...