Home World USA Ilhan Omar Lashes Out Over Backlash She Received On Tweet About Christians...

Radical left-wing “Squad” member Ilhan Omar thought it was a good idea to attack Christians on their holiest weekend of the year — Easter weekend.

Omar, who was born in Somalia, is one of the first two Muslim women to serve in Congress.

She shared a video of Christians singing worship music during a flight. The exact details of the flight are unclear. Rep. Omar shared the video on April 16th, the day before Easter. “I think my family and I should have a prayer session next time I am on a plane,” Omar wrote to Twitter. “How do you think it will end?”

TRENDING: Brilliant Move By DeSantis Could Bring an End to Nancy Pelosi

I think my family and I should have a prayer session next time I am on a plane. How do you think it will end? pic.twitter.com/5696Erwsl5

Following the backlash, Omar wrote, “And the original snowflakes had a complete and glorious meltdown.” Take a look:

And the original snowflakes had a complete and glorious meltdown 💅 https://t.co/1t6Jq4OIWM

Here are some of the top responses via Daily Wire: 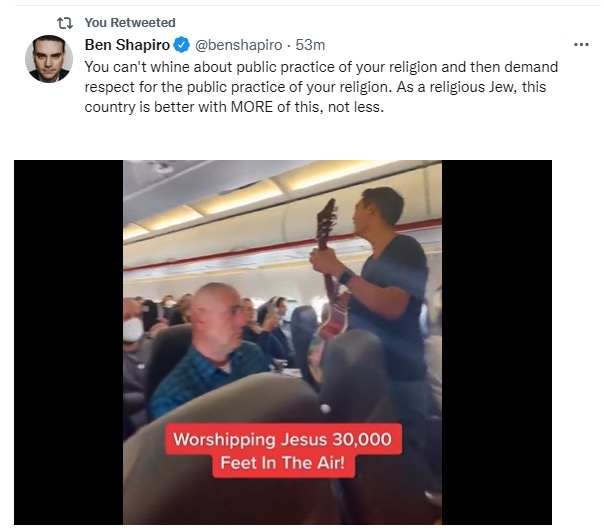 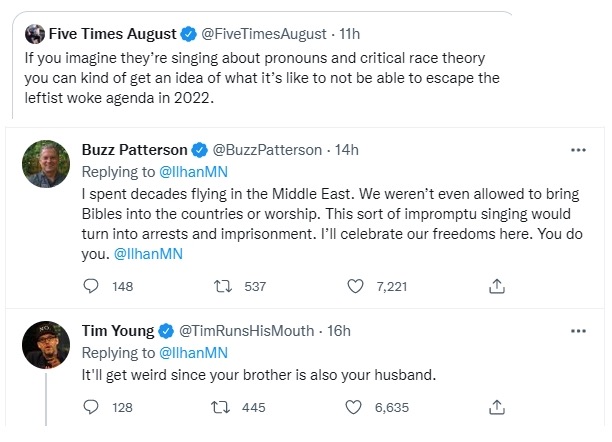 Shant Mesrobian, writer: “A member of Congress is supposed to have the restraint and maturity to not post a stupid, random, old video that for some reason is going viral right now as a way to score religious culture war points on a holy day for millions of people around the world.”

Kurt Schlichter, attorney and columnist: “I think you should shut up and stop being a bigot.”

Jose de Jesus Ortiz, writer: “I like to sleep on a plane. I would have been a tad annoyed by this, but this tweet by Ilhan Omar is tone death and perhaps even anti Christian even. FYI, @IlhanMN , many families have prayer sessions on planes before, after, during flights. I pray before & upon landing.”

Jason Osborne, political strategist: “Oh good lord it’s clearly a charter flight. No masks, but sure, let’s make an issue and on Easter no less.”

Asra Q. Nomani, activist and former professor: “One thing upon which we can depend: Ilhan Omar/CAIR is a perpetual participant in the Oppression Olympics. And as Easter begins, she has to compete with a Christian ‘prayer session.’”

Joe Pags Pagliarulo, radio host: “Why does this person who lives free and liberated because of the compassion of our country not appreciate that we’re a Judeo-Christian society uniquely founded to protect those of all faiths? Why does she constantly denigrate the place that offered her so much? Praying for her.”

Avi Kaner, business owner: “Ilhan Omar @IlhanMN attacks a group of Christian volunteers on an @easyJet flight in Europe delivering aid to Ukraine, because they’re singing. She has no idea about what transpired and whether or not it was approved. But it’s suddenly about her.”

John Cardillo, political commentator: “Without issue. I’ve been on many flights with Muslims saying a prayer before takeoff. No one cares.”

Mike Cernovich, political commentator: “Over 25,000,000 views. Thank you for sharing and spreading a positive message on Easter.”

Nick Searcy, actor: “Wa alaikum salaam? Allahu Akbar? Don’t you know? Maybe you could ask your brother, or your husband, or whatever.”