The scandalous son of Democrat Joe Biden, Hunter Biden, authored emails that have recently surfaced from a deep dive of Hunter’s abandoned laptop confirming details about the Biden family that would cause anyone else major problems.

According to reports, Hunter Biden wrote that he would be more than “happy” to introduce his business partners to a high-level Chinese Communist Party official so they could discuss potential investment opportunities.

This should cause alarm within any educated population due to the corrupt business practices of the Communist Party.

But we have special greedy and unscrupulous elite politicians in the United States of America.

Many US politicians are still so enamored with CCP leader Mao Zedong and his ability to play with power and dominate free people that they refuse to acknowledge the criminal and widespread atrocities that have been carried out by the Chinese Communists.

And some well-connected politicians like the Biden family seek favor and benefits from their CCP idols- putting America’s needs last.

Even the Washington Post spelled out the trouble with the Communists in a 1994 article and highlighted why there is even a debate in DC among elite politicians about the ethics of doing business with the CCP.

“HOW MANY DIED? NEW EVIDENCE SUGGESTS FAR HIGHER NUMBERS FOR THE VICTIMS OF MAO ZEDONG’S ERA,” The WaPo reported.

Mao launched more than a dozen campaigns during his rule, which began when he founded Communist China in 1949 and ended with his death in 1976. Some are well known while others, such as a bloody campaign to “purify class ranks” in the late 1960s, which involved army units, have received little publicity.

While most scholars are reluctant to estimate a total number of “unnatural deaths” in China under Mao, evidence shows he was in some way responsible for at least 40 million deaths and perhaps 80 million or more. This includes deaths he was directly responsible for and deaths resulting from disastrous policies he refused to change.

One government document that has been internally circulated and seen by a former Communist Party official now at Princeton University says that 80 million died unnatural deaths — most of them in the famine following the Great Leap Forward.

This figure comes from the Tigaisuo, or the System Reform Institute, which was led by Zhao Ziyang, the deposed Communist Party chief, in the 1980s to study how to reform Chinese society.

In comparison, Hitler is blamed for 12 million concentration camp deaths and at least 30 million other deaths associated with World War II, while Stalin is believed responsible for between 30 million and 40 million “unnatural deaths,” including millions from a famine he created.

So for Biden to be using their position of power and authority to solicit partnership from the Communists is outrageous.

Biz Pac review reported on the details of the new emails, showing Hunter Biden wanted to introduce the CCP to his Dad:

“The offer came following the communist official allegedly sitting at Hunter Biden’s table during a 2013 dinner with his father, then-Vice President Joe Biden, in Beijing. The revelation came to light in emails that Fox News Digital verified.

On July 22, 2014, the nephew of the notorious Boston crime boss James “Whitey” Bulger, James Bulger, asked via an email if Hunter could introduce his business partners to Tung Chee-hwa, who is a billionaire and the first chief executive of Hong Kong that was serving as the vice-chairman of the Chinese People’s Political Consultative Conference (CPPCC) in 2014. 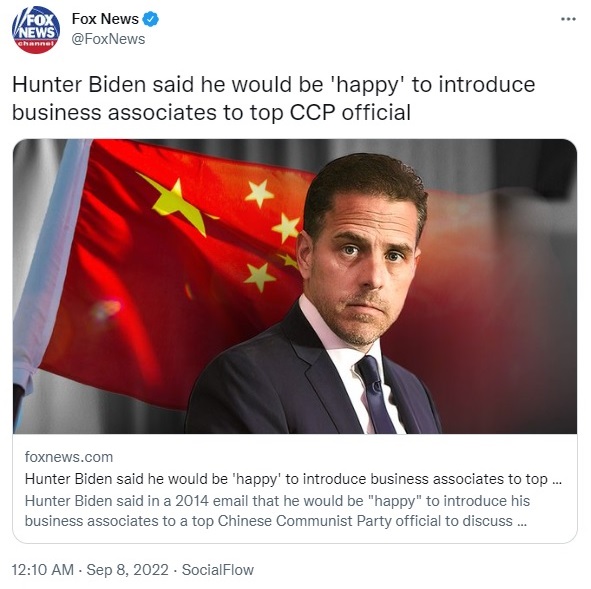 Bulger was the chairman of Boston-based Thornton Group LLC at the time. His firm worked in conjunction with Hunter Biden’s now-defunct Rosemont Seneca to launch its joint venture with Chinese investment firm Bohai Capital to create BHR Partners, which is controlled by Bank of China Limited.”

In the 2014 email obtained by Fox News Digital, Bulger requested that Hunter introduce BHR CEO Jonathan Li and Andy Lu, who was a BHR committee member, to Tung so they could discuss “BHR investment targets” and “fundraising.”

“It is my understanding that during the trip to Beijing that you made with your father, President Xi hosted a welcome dinner,” Bulger said in an email. “[A]t that dinner, you were seated right next to Mr Tung, therefore J and Andy believe it would be very helpful if you could please send a brief email to Mr Tung laying out that you are a partner and Board Member of BHR and that You would be grateful to Mr Tung if he could meet your local partners to discuss the Fund.”

“Please let me know if you can introduce these two to Mr Tung by email it is very important to our BHR intiative [sic] at this moment,” Bulger emphasized.

Hunter replied that he would be “happy” to grant the request but could not remember the names of the gentlemen seated next to him at dinner.

“Happy to do this,” he said in the email, “but I have no email address for Mr. Tung and he very well may have sat next to me but I don’t recall the two gentlemen’s names to my left and right. Regardless, I would suggest the team draft an email in Mandarin and English for my approval ASAP.”

“Let me reach out to Lin and J will revert ASAP,” Bulger responded.

It is unknown if the introductions ever took place.

Tung’s name popped up again on an “expected attendees” guest list for two state dinners at the White House during the Obama-Biden administration.