Home World USA Jenna Ellis: “Trump Is Not Going To Be Reinstated”

When people have friends like these, no one cares about the enemies!

Jenna Ellis is a turncoat! It isn’t fair!

In 2016, she showed us the true colors by attacking Trump and joining the ‘’Never Trumpers.’’

I know that you didn’t know that! My conclusion is like it is because no one knows who she was in 2016.

However, the woman has never changed, and she hid that very well by pretending to work for Trump and fight against election fraud.

Obviously, she failed. Or, she has never tried in the first place.

CNN covered the story about her comments from 2016.

Jenna Ellis has been one of President Donald Trump’s most ardent defenders since joining his campaign as a legal adviser and surrogate a year ago, but in early 2016 she was one of his toughest critics and deeply opposed his candidacy, according to a CNN KFile review of statements she made on her official Facebook page and in local Colorado radio appearances.

Ellis, an attorney and former law professor from Colorado, repeatedly slammed then-candidate Trump as an “idiot,” who was “boorish and arrogant,” and a “bully” whose words could not be trusted as factually accurate. She called comments he made about women “disgusting” and suggested he was not a “real Christian.”

In one March 2016 Facebook post, Ellis said Trump’s values were “not American,” linking to a post that called Trump an “American fascist.” She praised Mitt Romney for speaking out against Trump, referring to him as “Drumpf,” — a nickname coined by comedian John Oliver after a biographer revealed Trump’s ancestor changed the family’s surname from Drumpf to Trump.

“Why should we rest our highest office in America, on a man who fundamentally goes back and forth and really cannot be trusted to be consistent or accurate in anything,” Ellis said in one April 2016 radio appearance.

In March 2016, Ellis attacked Trump supporters in a Facebook post for not caring that the Republican candidate was “unethical, corrupt, lying, criminal, dirtbag.”

In another post, she said his supporters didn’t care about the truth.

“I could spend a full-time job just responding to the ridiculously illogical, inconsistent, and blatantly stupid arguments supporting Trump,” she wrote in March 2016. “But here’s the thing: his supporters DON’T CARE about facts or logic.

hey aren’t seeking truth. Trump probably could shoot someone in the middle of NYC and not lose support. And this is the cumulative reason why this nation is in such terrible shape: We don’t have truth-seekers; we have narcissists.”

In a statement to CNN on Wednesday, Ellis said, “It’s no secret that I did not support Donald Trump early in the primary process in 2015, like many others who didn’t know him, and I’ve always been straightforward with my opinions, and I’ve always admitted when my opinion changes. I am glad to have learned that I was completely wrong about Trump back then, and I’ve said that over and over publicly, as I saw him keeping his promises and then eventually getting to know him personally.

“I appreciate KFILE showing clearly through past statements that I think for myself and that my mind was changed based on fact and personal knowledge. President Trump is a sincere Christian, the best president in modern history, and made and kept his promises to the American people. I am proud to stand with him and his goals for the future of this country and all of its citizens,” she said.

In another Facebook post from 2015, Ellis, a conservative evangelical Christian, compared Trump to a “last days” bible verse and shared a post calling Trump “without love,” “treacherous,” “abusive,” and “unholy.”

In a radio appearance from February 2016, she contended that Trump was not a genuine Christian because he was incapable of seeking forgiveness or repentance.

In another Facebook post from February 2016, Ellis criticized Trump’s attacks on the media and his wanting to change libel laws, linking to a Washington Post story that said Trump’s intent was “to destroy American democracy.”

“Trump cannot handle criticism,” she wrote. “This is insanely dangerous to the fundamental American value and inalienable right to freedom of speech.” She reiterated the belief on a radio show from February 2016 where she said Trump was “one of the greatest threats to our liberty” by seeking stricter libel laws.

Moreover, that was only the background. See what she posted today.

The election was lawless, six states allowed their delegates to vote by false certifications, but the EC process happened.

The Constitution has only one process for removal of a sitting president: impeachment and conviction.

No, President Trump is not going to be “reinstated.”

The best thing we can do as constitutionalists moving forward is to ensure this utter disregard for states’ election laws never happens again.

That’s why election integrity is the number one issue facing America today.

Even if Biden/Harris were impeached and convicted, there is a constitutionally prescribed presidential succession.

The states had their opportunity to cure the corruption before January 20; they refused.

This is what @RudyGiuliani and I told them.

This is entirely on the GOP.

Is this fair? No.

And just because we can’t “reinstate” Trump does NOT mean we give up or that we lost. If our founders gave up, we’d still be British!

Can I ask you something, Jenna? Please leave your job, and leave it to the professionals like Lin Wood and Sidney Powell.

Furthermore, if someone tries to delete the Tweets, we have saved them. 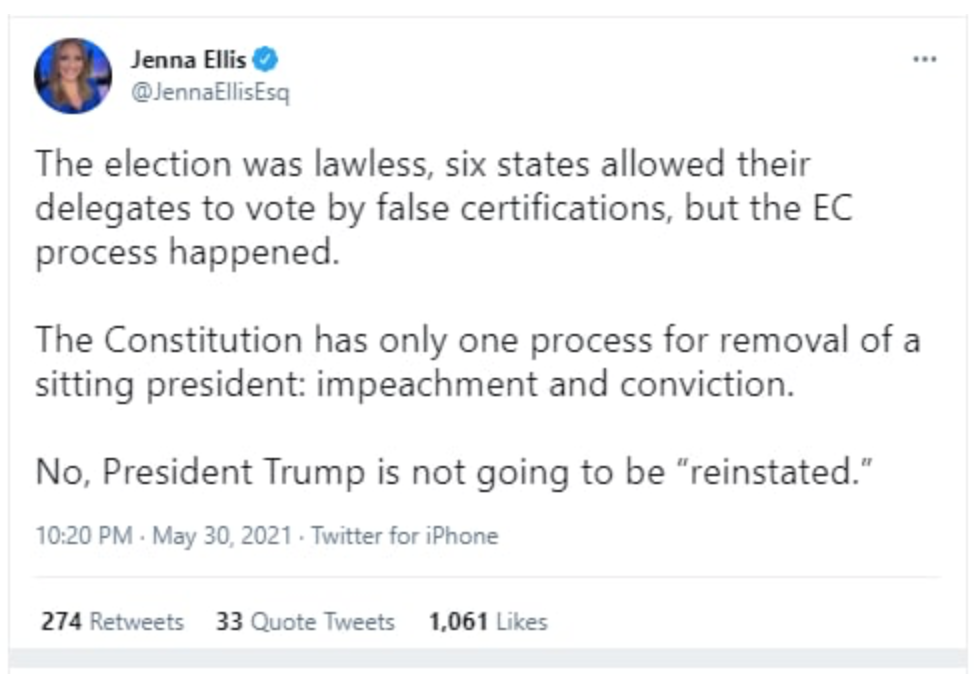 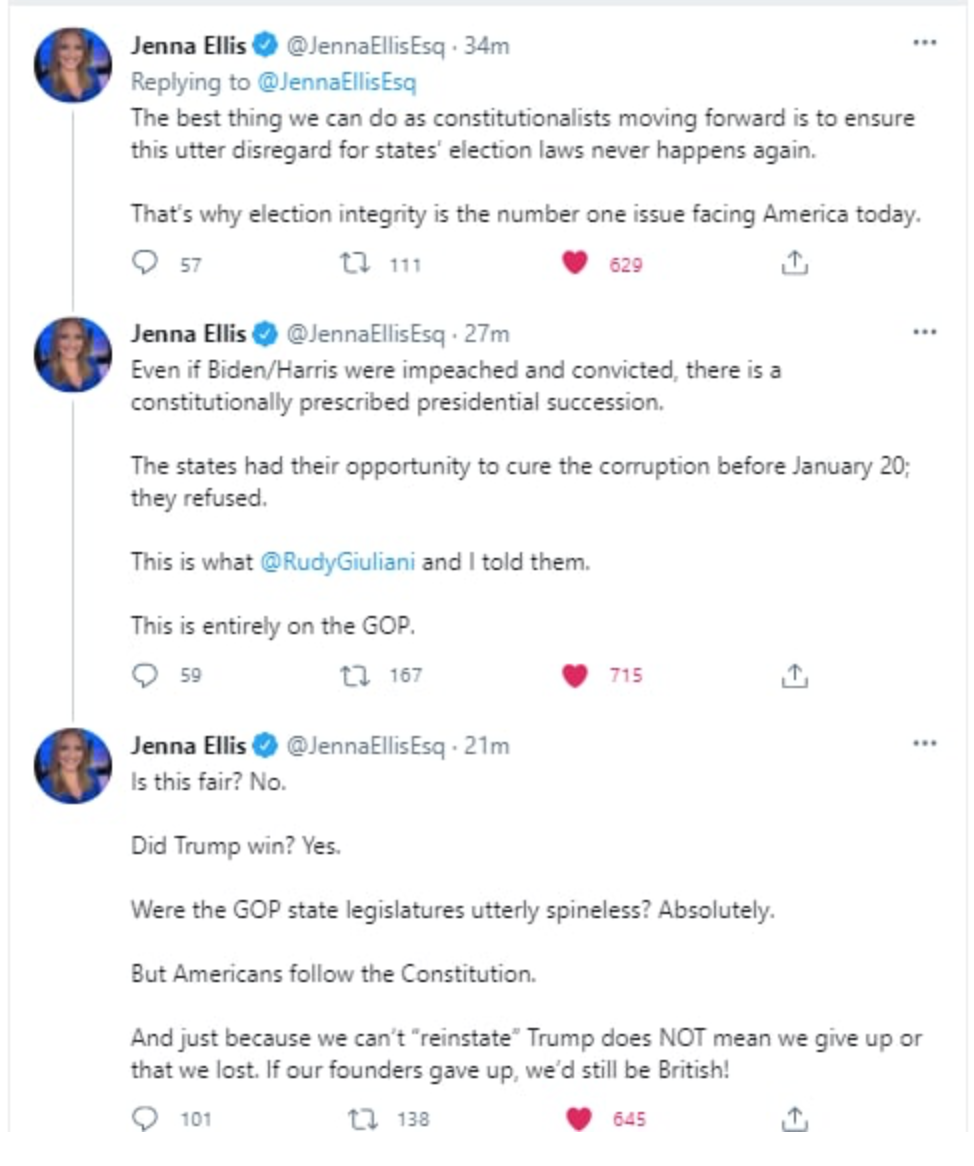 And now you can see Lin Wood’s answer. 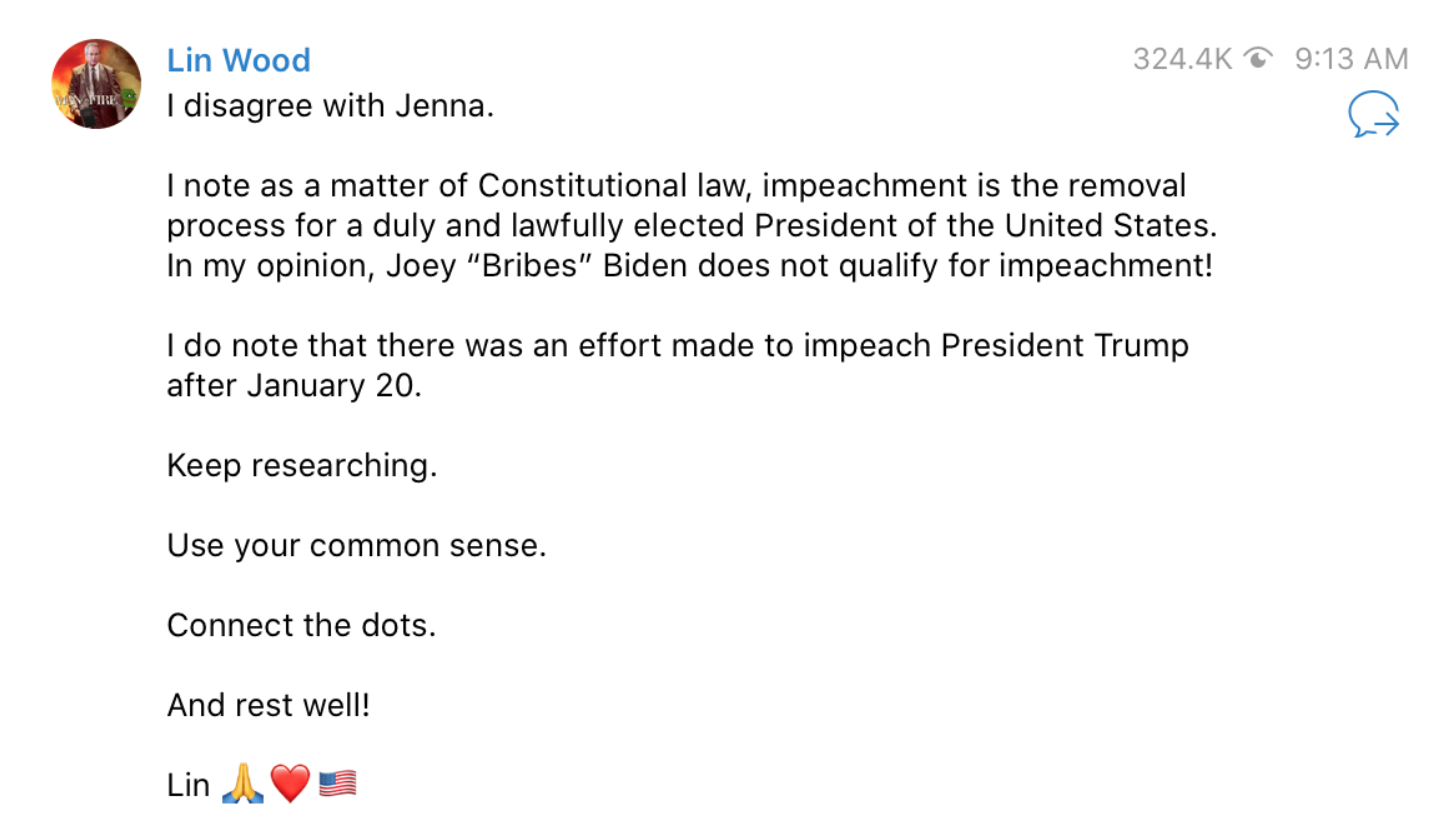 And Sidney Powell commented yesterday about how it would be a case of the first impression. However, that doesn’t mean you give up.

Below, you will find Powell’s explanation about the Second Inauguration Day coming very soon.

She talks about the overturn of fraudulent elections and Trump’s possible comeback.