Peter Navarro, an ex-White House official, was charged with contempt in June after refusing to appear before a House committee investigating the Jan. 6 riot at the nation’s capital.

His arrest comes months after that of former White House advisor Steve Bannon.

A court document revealed that the Justice Department has filed a lawsuit against Peter Navarro for emails sent during his time as the trade adviser to former President Donald Trump.

“The DOJ alleges that Navarro used at least one non-official email account to send and receive messages constituting presidential records, according to documents filed Wednesday with the U.S. District Court for the District of Columbia,” Newsmax reported.

“While serving in the White House, Mr. Navarro used at least one non-official email account — an account hosted by the non-official service ProtonMail — to send and receive messages constituting Presidential records,” a court filing revealed Wednesday.

“Mr. Navarro did not copy each email or message constituting Presidential records that was sent or received on his non-official account or accounts to his official government email account.”

The DOJ alleges that Navarro did not respond to the National Archives and Records Administration about those communications that were improperly handled.

The filing said that nonofficial electronic accounts used to carry out official duties are considered presidential records and must be forwarded to official accounts within 20 days of being sent.

In addition, the department said that Navarro, when contacted by DOJ lawyers, “refused to return any Presidential records that he retained absent a grant of immunity for the act of returning such documents.”

“Mr. Navarro is wrongfully retaining Presidential records that are the property of the United States, and which constitute part of the permanent historical record of the prior administration,” according to the filing.

An attorney for Navarro, John Irving, and another attorney, John Rowley, responded to the DOJ’s claim in an interview with The Hill.

“The former Trump adviser pleaded not guilty to two misdemeanor counts of contempt of Congress. He declined an offer by the government to plead guilty to a contempt of charge, the lead federal prosecutor in the case told a judge on July 15,” the outlet added.

While Democrats attempt to frame Trump with the sham committee, some of his allies are pushing back.

In July, House Speaker Nancy Pelosi was pressed by Truth Social CEO Devin Nunes to explain why Capitol Police failed to take extra security measures leading up to and on the day of the violence.

In an interview with Newsmax’s “Spicer & Co.,” Nunes, a former Republican Representative, discussed the issue with Kash Patel, who worked for Nunes when he was the chairman of the House Intelligence Committee. Patel went on to become a top official in Trump’s administration.

“There was intelligence ahead of time that the Capitol Police should have known – which clearly Kash over at the White House, they knew, which is why President Trump authorized National Guard troops,” Nunes declared.

“You know there are tens of thousands of people coming, and you do nothing? And this is the question Nancy Pelosi is going to have to answer because the payback is going to be a ‘you-know-what’ if Republicans are successful this November,” he continued.

It is estimated that 4,000 illegal immigrants are ‘inundating’ Washington D.C.’s streets at the present time. This number is not extraordinary given that Washington D.C.’s population is approximately 689,545 individuals.

In order to deal with these 4,000 illegals, D.C. Mayor Muriel Bowser wants to deploy the National Guard…

She is keen on enlisting the National Guard for the removal of 4,000 people. Yet she was unwilling to do the same for January 6th.

On the 6th, a far greater number of people poured into the area, and several agencies and President Trump requested troops be sent to the D.C. area in order to keep the peace.

In his post on Truth Social, President Trump asked:

The Mayor of Washington, D.C., wants the National Guard to help with the thousands of Illegal Immigrants, coming from the insane Open Border, that are flooding the City, but refused National Guard help when it came to providing Security at the Capitol Building for a far larger crowd on January 6th. Figure that one out? 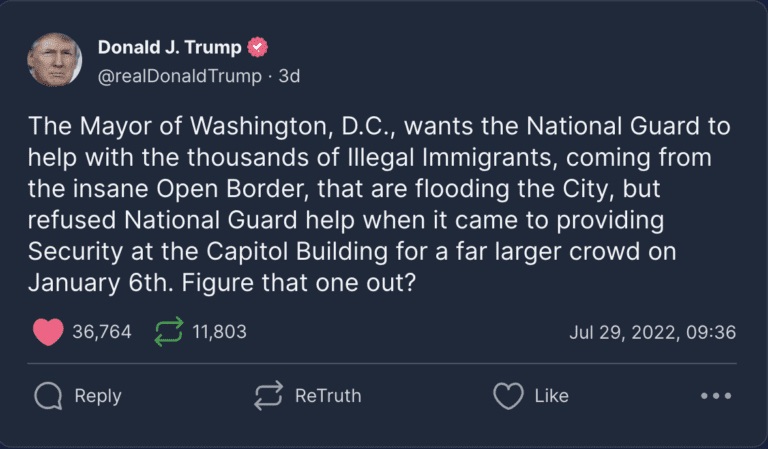