The left melted down over the fact that Elon Musk pried Twitter away from anti-freedom socialists who ran the company. And they continue to do so as it was revealed that a major group of globalists including Soros back organizations are attempting to get advertisers to pull the plug on Twitter.

Musk promised to allow Twitter users unfettered freedom of expression, and some of the most high-profile liberal figures have joined forces to advocate for advertisers boycotting Twitter if this happens.

In a letter signed by 26 NGOs and advocacy groups, they expressed concern about the plan of the world’s richest man.

‘Elon Musk’s takeover of Twitter will further toxify our information ecosystem and be a direct threat to public safety, especially among those already most vulnerable and marginalized,’ the letter reads.

As a result of their advertising on Twitter, they warned that their business would ‘risk association with a platform amplifying hate, extremism, health misinformation, and conspiracy theorists.’

‘Under Musk’s management, Twitter risks becoming a cesspool of misinformation, with your brand attached, polluting our information ecosystem in a time where trust in institutions and news media is already at an all-time low.

‘Your ad dollars can either fund Musk’s vanity project or hold him to account. We call on you to demand Musk uphold these basic standards of community trust and safety, and to pull your advertising spending from Twitter if they are not.’

Musk responded to the threats, tweeting, ‘Who funds these organizations that want to control your access to information? Let’s investigate …’

Afterward, he added, ‘Sunlight is the best disinfectant.’

Sunlight is the best disinfectant

After Twitter’s board of directors accepted his offer to buy the company, Musk stated:

“Free speech is the bedrock of a functioning democracy, and Twitter is the digital town square where matters vital to the future of humanity are debated. I also want to make Twitter better than ever by enhancing the product with new features, making the algorithms open source to increase trust, defeating the spambots, and authenticating all humans. Twitter has tremendous potential – I look forward to working with the company and the community of users to unlock it.”

After Musk completes his $44 billion acquisition of Twitter, he will serve as temporary CEO, according to reports.

Following the buyout, CNBC reported on Thursday morning that the Musk will remain in that role for a few months.

This move could create havoc at the social media titan, where Parag Agrawal has been CEO only for a few months.

The announcement comes after Musk revealed that 18 investors had pledged to pony up a combined amount of more than $7 billion to fund his takeover.

Musk said his friend Larry Ellison, the founder of Oracle, will invest $1 billion to help close the $44 billion buyout in a filing on Thursday.

In addition to Sequoia Capital ($800m) and Brookfield ($250m), Musk said he had received equity commitment letters for funding of $7.14 billion.

The Saudi royal made the transaction ‘in order to retain an equity investment in Twitter following completion of the Merger.’

In a tweet this morning, Alwaleed referred to Musk as ‘his ‘new friend’ who will be an ‘excellent leader’ at the company.

Alwaleed initially objected to Musk’s Twitter acquisition, but he took to the platform Thursday to endorse him.

‘Great to connect with you my ‘new’ friend @elonmusk,’ he tweeted. ‘I believe you will be an excellent leader for @Twitter to propel & maximise its great potential.

‘@Kingdom_KHC & I look forward to roll our ~$1.9bn in the ‘new’ @Twitter and join you on this exciting journey.’ 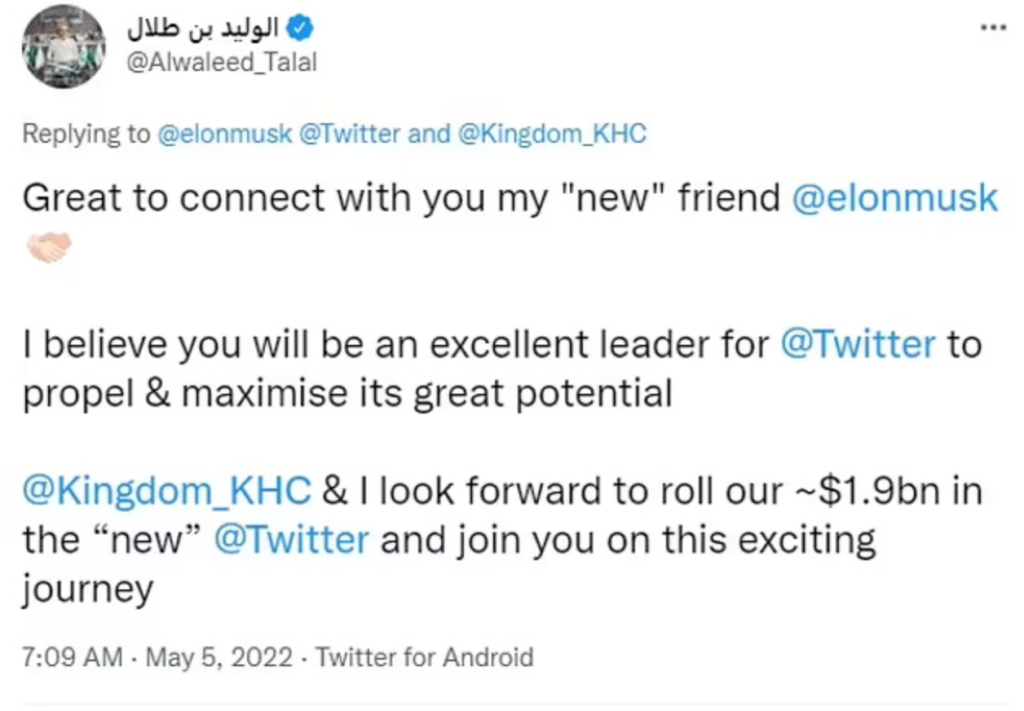 Musk didn’t reply to the prince.

The royal initially rejected Musk’s $41 billion offer to buy Twitter saying that the amount was not ‘close to the intrinsic value of Twitter given its growth prospects.’

‘Being one of the largest & long-term shareholders of Twitter, @Kingdom_KHC & I reject this offer,’ he posted on April 14. Bin Talal operates the KHC holding company.

A tweet from 2015 was also shared. In that tweet, Kingdom KHC said it upped its stake in Twitter to 5.7%. Exactly how much of the company it owns is unknown.

Musk responded: ‘Interesting. Just two questions, if I may. How much of Twitter does the Kingdom own, directly & indirectly? What are the Kingdom’s views on journalistic freedom of speech?’ 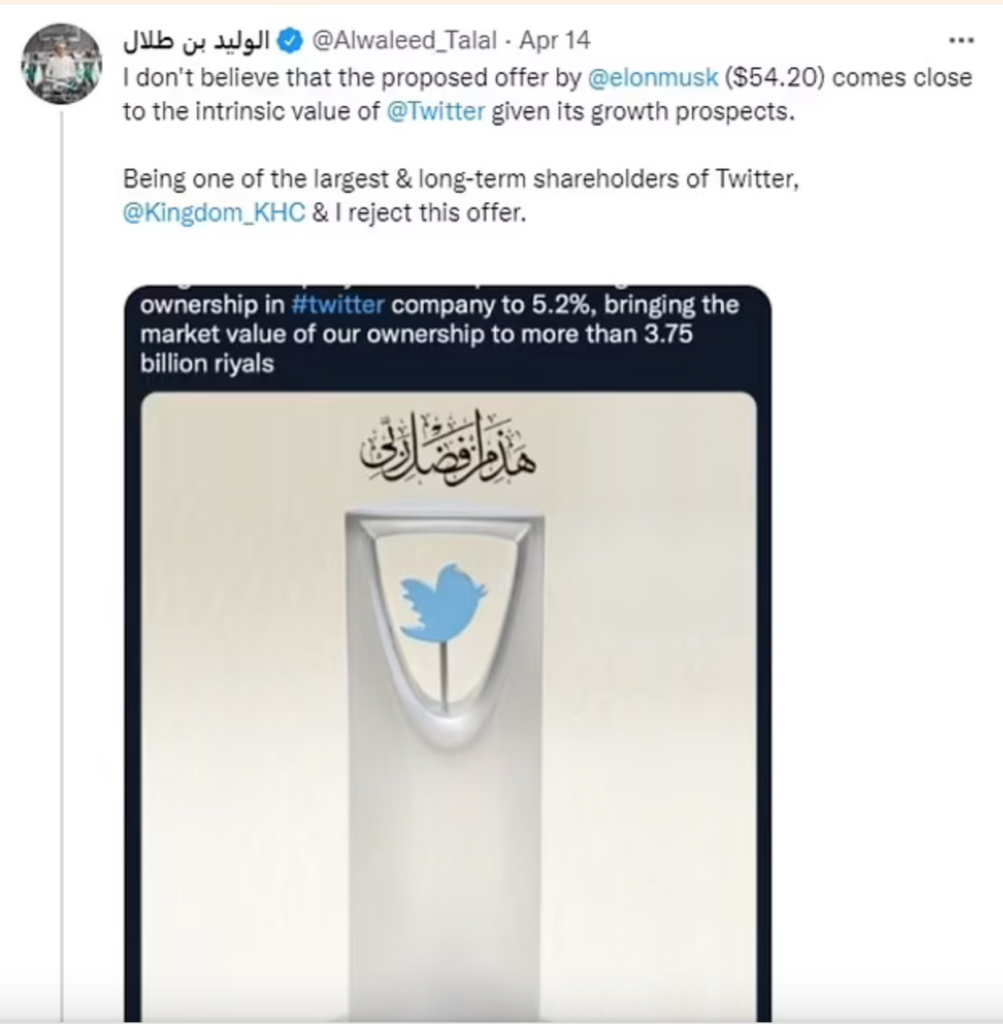 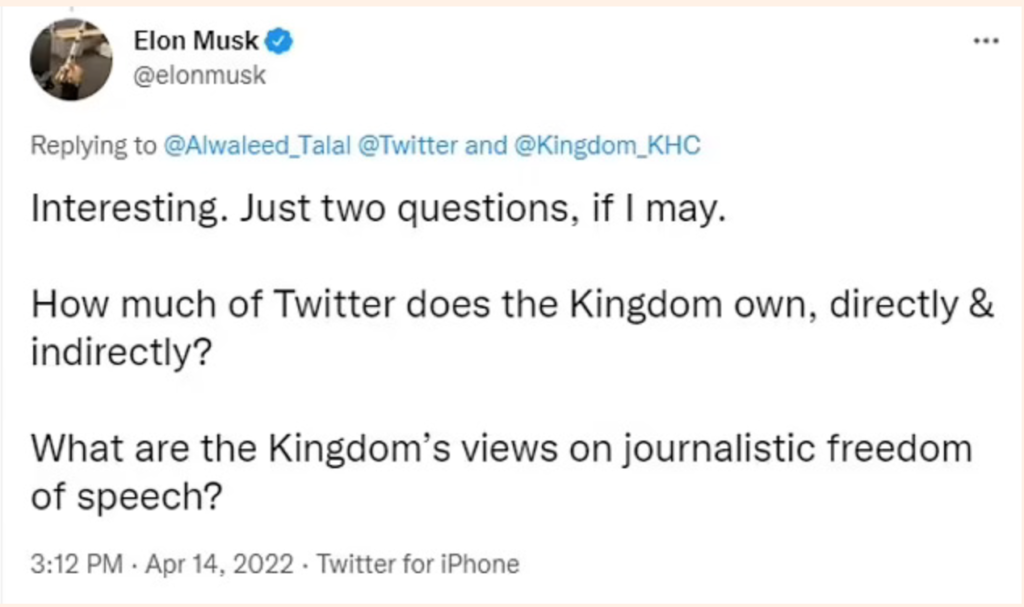 According to the filing, Musk’s margin loan was lowered from $12.5 billion to $6.25 billion.

In the coming days, the billionaire will continue to discuss sharing shares of Twitter with existing shareholders – including former CEO Jack Dorsey.

Musk’s investor announcement sent the Twitter stock soaring to $50.17 in pre-trading on Thursday.

In response to a wave of hysteria from liberal social media personalities who are threatening to quit Twitter over Elon Musk’s $44 billion takeover, Twitter has blocked its developers from making changes to the app.

Twitter is now blocking any product updates that aren’t ‘business-critical,’ with the company’s vice-president approving such updates. As Bloomberg reports, the move is intended to prevent angry employees from ‘going rogue’ after staff branded Musk ‘dangerous’ to democracy.