In the last days preceding Tuesday’s midterm elections, conservative Republicans are rounding the final bend and aiming for the finish line. In certain contests, independent candidates diminish one party or another by dividing the vote. In these last days, Independents must decide whether to continue their campaigns or acknowledge that their support base is insufficient and back the candidates whose programs most closely align with their own.

At one time, Blake Masters, the Republican candidate for US Senate in Arizona, trailed the far-left Democrat Mark Kelly by as much as 15 points.

PERINO: “The Arizona Senate race now within the margin of error. Republican Blake Masters is closing the gap. In the latest Fox News poll, incumbent Democrat Mark Kelly ahead by 6, 46 to 40, in our poll, down from an 8 point lead in August, but there are other polls showing it even closer. Joining us now is Arizona Senate candidate Blake Masters. Great to have you here. I know you’ve been out there campaigning, and I’m curious what you think are the key issues that will convince voters to fire Senator Mark Kelly in Arizona, when the election’s taking place?”

MASTERS: “Absolutely, Dana. I mean, the first is inflation. You know, here in the greater Phoenix Metro we have the worst inflation — literally the worst — in the whole country at 13 percent. And I suspect if you measure it properly, the real numbers more like 15 to 20 percent. So again, this is Mark Kelly’s fault. You know, Joe Biden Mark Kelly, they declared war on American energy, they surrendered our energy independence, and then they printed $6 trillion too quickly. And so that caused this massive inflation. And then the second is the border. You know, this wide open southern border. Again, Joe Biden and Mark Kelly, they caused this crisis. They gave the whole southwest border over to the Mexican drug cartels. It’s a human trafficking disaster. All the — the crime being committed. The fentanyl coming through. This is all on Mark Kelly. And so these are twin crises and Arizona is getting the brunt of it. The border crisis and this economic inflation crisis. People have had enough and it’s why they want to make a change in November.” 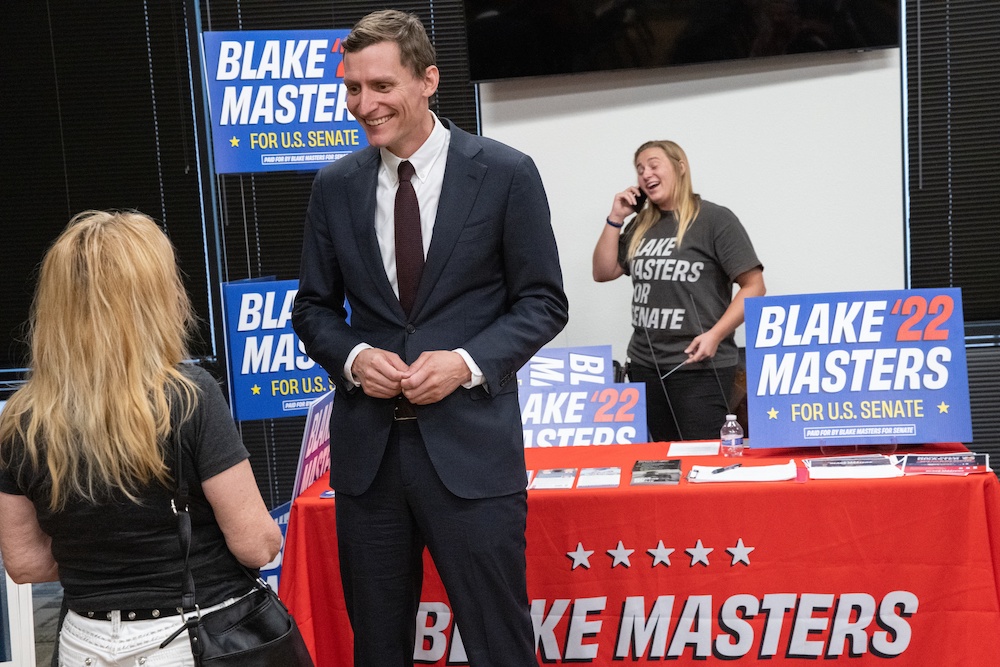 Masters has conducted an outstanding campaign despite the fact that Mitch McConnell funded Lisa Murkowski in Alaska instead of Blake for the most of the year. And according to a survey conducted by local FOX 10 last week, Blake appears to have bridged the gap. The race is currently in doubt.

Marc Victor, the Libertarian candidate running for Senate in Arizona, is dropping out and endorsing Blake Masters, the Republican nominee.

Masters called the endorsement "another major boost of momentum." https://t.co/UrWJz49TvF

Victor then began to laud Masters’ virtues and encourage his fans to vote for Masters.

“I’ve said from the very beginning that the reason I’m running for Senate is to promote and get us in the direction of freedom and peace and civility,” Marc Victor said in a YouTube video announcing his endorsement of Masters. CONTINUE READING…

Fox News declared on Saturday that Lara Trump is no longer a compensated contributor. According...
US News

The Supreme Court is preparing to hear a new election case, a Republican-led challenge...