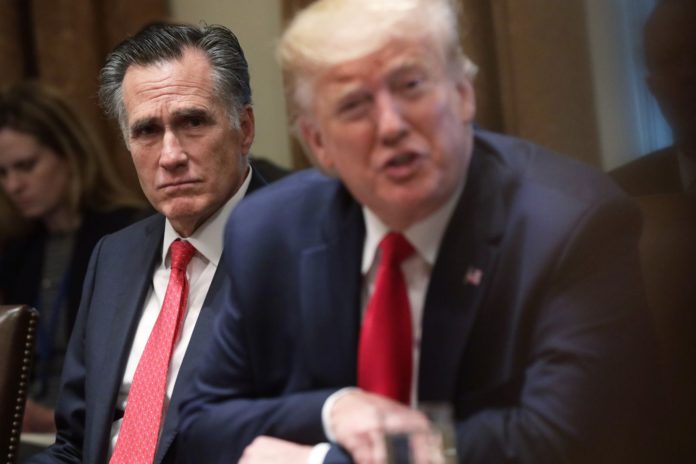 Arch NeverTrumper Mitt Romney tried Thursday to give President Donald a hard shove out of the White House, but Trump pushed back even harder.

On the strength of margins in key states that came from mail-in ballots, presumptive potential President-elect Joe Biden currently enjoys a lead in the presidential election.

However, the Trump campaign alleges there has been voter fraud in states that include Arizona, Nevada, Georgia, Pennsylvania, Michigan and Wisconsin.

Trump has not conceded, instead allowing his campaign’s legal options to play out.

However, Romney, who in 2016 was among the leaders of a movement to deny Trump the Republican nomination for president, said that Trump should stop fighting. Romney issued his formal congratulations to Biden on Nov. 7.

“Having failed to make even a plausible case of widespread fraud or conspiracy before any court of law, the President has now resorted to overt pressure on state and local officials to subvert the will of the people, and overturn the election,” Romney said in a statement posted to Twitter on Thursday.

“It is difficult to imagine a worse, more undemocratic action by a sitting American President.”

Trump, who is not known to suffer Romney’s criticisms in silence, fired back on Twitter.

“RINO Mitt Romney should read this. I’m sure, however, that he feels he got slaughtering by Obama ‘fair and square,’ Trump tweeted Friday.

Trump was retweeting a column by conservative commentator Wayne Dupree in which Dupree referenced a 2012 tweet from Trump concerning Romney’s contest against former President Barack Obama.

RINO Mitt Romney should read this. I’m sure, however, that he feels he got slaughtering by Obama “fair and square”. https://t.co/GGZKfSAp8z

On his website, Dupree wrote, “I understand that this feels really disheartening, and difficult right now, but we can’t give up. This is when we need to fight the hardest.”

Dupree said that “the media (Fox included) Dems, election officials, and even parts of the GOP will work like crazy to convince you that everything is lost and Biden is the winner. That’s not true. Tune out those lies and keep fighting.”

While there have been multiple alleged instances of voting irregularities, proof has yet to surface of widespread nefarious activity that affected the final results of the presidential election.

The Romney-Trump spat brought out Trump-haters to salute Romney, while others rebuked him.

More of this, please.

We’re not going away quietly.

Check out the latest episode of my podcast, with @BrandonStraka, as we talk about just that. https://t.co/neruHHfNpS

Romney’s tweet referenced a report that Trump called a Republican member of the Wayne County canvassing board before she and another Republican indicated they wanted to reverse their initial decision to approve the results of the election in the Michigan county, which includes Detroit.