President Donald Trump released a Mother’s Day message and he didn’t hold back on criticizing liberal activists who “campaign unrelentingly” and “endlessly promise” to take him down.

“After years of persecution, even the Fake News says there’s no case or, at best, it would be very hard to bring. Someday soon they will start fighting RECORD SETTING violent crime.”

Trump concluded his message with an “I love you all!”

Trump’s post has been liked over 55,000 times and reposted over 15,600 times. He sent the message using his own social platform called TRUTH social. 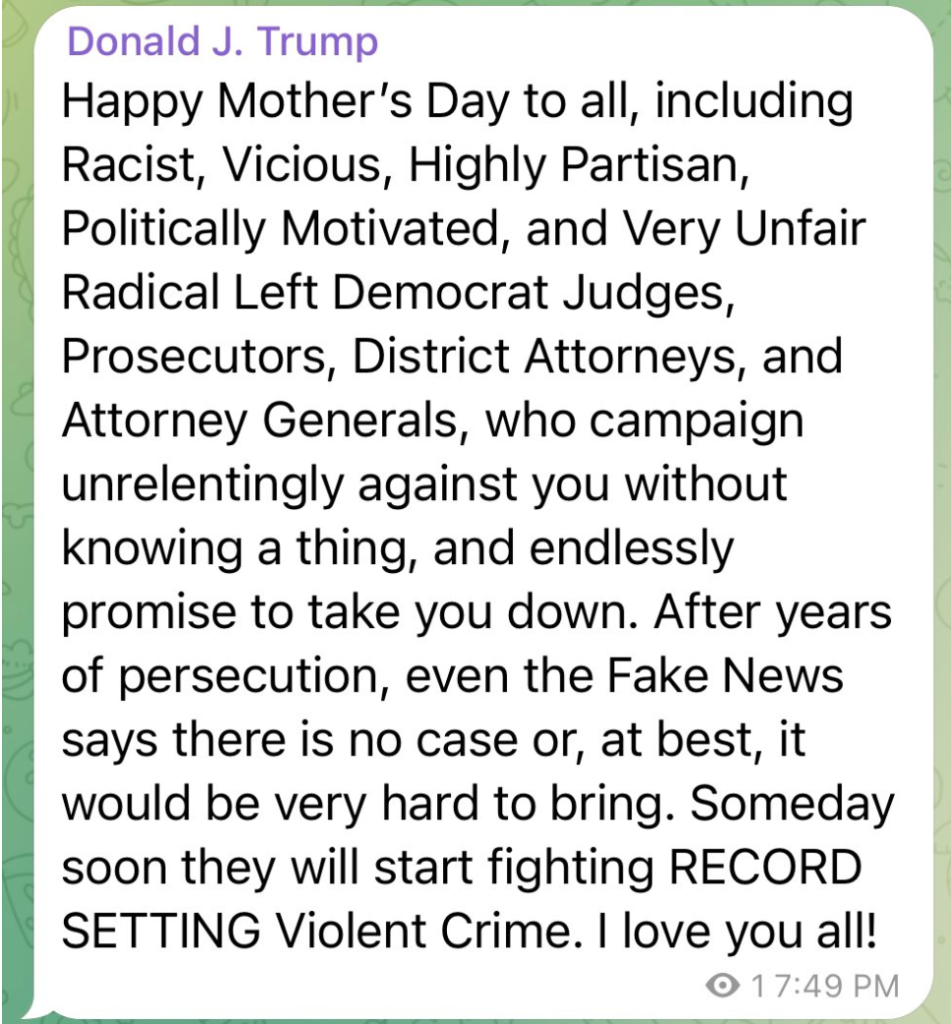 The statement is a response to ongoing legal battles being fought by Trump. The left-wing political witch hunt against President Trump continues to rage on in New York.

Manhattan Supreme Court Justice Arthur Engoron ruled against Trump by holding him contempt and ordering him to pay $10,000 per day for failing to provide documents to Attorney General Letitia James.

Trump’s lawyer says he doesn’t have the documents related to older company business dealings in the Trump organization. Nonetheless, the judge struck his gavel after pretentiously declaring, “Mr. Trump, I know you take your business seriously, and I take mine seriously. I hereby hold you in civil contempt and fine you $10,000 a day.”

Defense lawyers for Trump explained that he didn’t have any of the documents requested in the AG’s civil probe.

“In particular there is no admissible evidence of who, what, where, when and how any search was conducted,” Engoron said, noting that Trump’s boilerplate response to the subpoena, “just doesn’t cut it. Thus Mr. Trump didn’t comply,” the judge said.

Trump has blasted the investigation as a “witch hunt.”

Earlier in the hearing, Trump lawyer Alina Habba maintained that her client was in the clear because any documents he might have were already being turned over to the AG’s office through the Trump Organization.

But Engoron pressed Habba on why Trump hadn’t submitted a sworn affidavit attesting to that fact.

“I feel like there is an 800 pound gorilla in the room here. Why don’t we have an affidavit from [Trump]?” the judge said, noting that the ex-president has been running the company for decades.

“I’m happy to, if they ask for it,” Habba said of the AG’s office. “I would be happy to do so because he doesn’t have anything left to give.”

Engoron responded, “How do you know he will swear to that?”

“Because my client is an honest person, much to the dismay of some of the people in this room,” Habba said. “We have nothing to hide.”

During oral arguments, Habba called the AG’s probe a “political crusade” that “continues to grow and expand” and has cost the Trump Organization millions of dollars in legal fees.

“This is a poor utilization of tax payers’ dollars,” Habba said of the investigation, noting it “cannot be allowed to aimlessly go on when the cost to my client and the public is so high.”

Andrew Amer, a lawyer for the AG’s office, said investigators were being hampered “because we don’t have evidence from the person that sits at the top of this organization.”

“Our patience is at an end and so should the court’s be,” he said.