Every woke liberal was collectively outraged when the Supreme Court moved to reverse Roe V. Wade. Pro-abortion groups immediately had people in the streets. Demonically unhinged people became violent in places. Of course, everyone wanted to know who leaked the information.

In all of US history, a leak from the inner chambers of the Supreme Court has never happened to such an extent. It wasn’t just a few notes about the case, but rather a complete legal opinion. This document was complete with the names of those Justices who were for and against the measure.

According to ABC News, the situation is as follows:

The importance of confidentiality ensures that justices are free to judge the truth based on the Constitution rather than fear of public opinion or outrage, as in this case.

In the draft opinion, the justices provide a ringing denunciation of the 1973 ruling that guaranteed the right to abortion under the federal constitution and a 1992 decision that effectively maintained it, Planned Parenthood v. Casey. “Roe was egregiously wrong from the start,” Alito wrote in the draft.

“We hold that Roe and Casey must be overruled,” he stated in the document, which is titled “Opinion of the Court.” “It is time to heed the Constitution and return the issue of abortion to the people’s elected representatives.”

Former National Press Secretary for Hillary Clinton’s failed 2016 presidential campaign Brian Fallon praised a potential “brave clerk” who may have leaked what appears to be a preliminary ruling by Justice Samuel Alito overturning Roe v. Wade and Planned Parenthood v. Casey. It took the “unpredecented [sic] step of leaking a draft opinion to warn the country what’s coming in a last-ditch Hail Mary attempt to see if the public response might cause the Court to reconsider.”

Is a brave clerk taking this unpredecented step of leaking a draft opinion to warn the country what's coming in a last-ditch Hail Mary attempt to see if the public response might cause the Court to reconsider?

It is now time to track down the leaker. Here are the top suspects in this unfolding investigation, even though we don’t know their identities for sure.

First and foremost, it’s imperative to realize that there are differing opinions about where the leaker originates. Opinions vary between conservatives and liberals.

Even if it seems improbable, the theory that the document was leaked by someone on the right is gaining ground. We must look critically at the facts and speculations that point to a conservative being the leaker.

The first person in question has not been confirmed as the leaker, but the evidence does seem to point in her direction.

Is this the Leaker?
1. Has the Motive
2. The Opportunity
3. Ease is Access pic.twitter.com/J2pZCeCkqU

In the tweet above, the woman is Ginni Thomas. Her husband is Justice Clarence Thomas. You may remember the controversy she caused when her text messages regarding “stop the steal” became public.

ABC notes that it may be a family member of one of the justices.

Mr. Epps said it is not out of the question that the justices might share their work with family members. (A common conspiracy theory on Twitter — offered with no evidence — is that Ginni Thomas, a conservative political activist and the wife of Justice Clarence Thomas, leaked the draft.)

The leak could have been a strategic move by someone in the pro-life movement. Release a copy of the draft that includes the names of the Justices that voted for it and those against it so that no one changes their minds later on.

What would it look like if a Justice changed sides after the fact? It wouldn’t be a good look.

Despite growing in credibility, many people believe it was in fact Liberals who published this leak. I thought it wasn’t a coincidence that they all came to Twitter at the same time. There were similarities in the language and the calls to action.

End the filibuster. Codify #RoeVWade with a national law protecting abortion rights. Expand the Supreme Court. Stop this horrifying injustice in its tracks.

Congress must pass legislation that codifies Roe v. Wade as the law of the land in this country NOW. And if there aren’t 60 votes in the Senate to do it, and there are not, we must end the filibuster to pass it with 50 votes.

We now turn our attention to possible leakers on the Left.

Is this the SCOTUS LEAKER ?
Amit Jain who clerks for Justice Sotomayor ,that's the word on the street pic.twitter.com/9Zqh3KzsAT

Amit Jain is allegedly a clerk for Associate Justice Sonia Maria Sotomayor. In a report on Sotomayer, Yale Law states that Jain attended the school in 2018.

Jain was quoted in a 2017 Politico piece by Josh Gerstein.

Some have confused Jain with another person with the same name who lives in India and was the Managing Director of Sequoia Capital India.

When you work with a super entrepreneurial team and #founders, it's hard to not get the bug! Thrilled to launch my own #startup in the coming weeks. Super grateful to @Sequoia_India; privileged for all the support. More soon! https://t.co/V9Iw9c4Ikd

The person in the above tweet is not the Amit Jain in question. It’s important to make sure we stick to facts and do our research.

Next, we have another liberal who may have been the leaker.

#ElizabethDeutsch Is this the #SCOTUS leaker? If so, she should be disbarred in the most public way possible. Certainly is must be a crime to leak anything from the SCOTUS! pic.twitter.com/dsxp0uMxRw

Elizabeth is a possibility worth considering. She clerks for Justice Breyer. Her political leaning is to the left, and if one were to get creative, she could have gained access to the document. She has a Yale Law Journal article from 2015 as her greatest achievement. 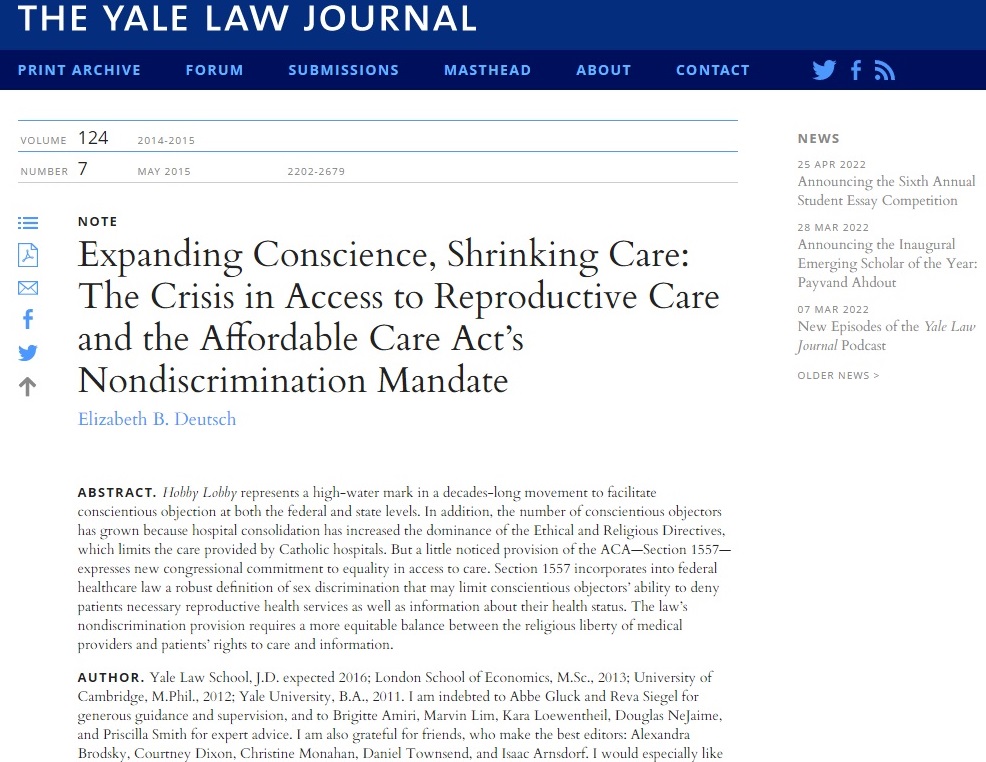 Abortion and reproductive rights were the topics of the article. It also includes a criticism of Hobby Lobby.