As a result of the mind-boggling level of election fraud in Arizona, election officials are unconcerned about being accused of abuse of authority or about public openness in addressing any conflicts of interest in the state’s most recent election. However, there are no taxpayer-funded public workers who are concerned with explaining the mess they have created via the decisions they have promoted.

“Behind Your Ballot: How election ballots are printed and verified in AZ. Arizona plays a bigger role in the election process than you probably realize,”  according to Runbeck Election Services’ website.

And we are discovering this to be true as election tallying devices have failed in mind-boggling ways – for a variety of reasons – beginning early on election day in November in Arizona.

And now we learn that the paper ballots may have been problematic as well.

The Arizona election offices have many questions to answer on the practices they used to frame the previous election, including who they picked to produce the defective ballots that voters were required to use.

Republican Kari Lake is presently contesting the election, and her legal team has filed a lawsuit against Secretary of State Katie Hobbs for a plethora of errors and clear purposeful election fraud.

One reporter for the Independent identified an apparent conflict of interest in the printing of ballots and reported the following.

“Shocking News: Owners of Top Election Printing Companies Runbeck and Cathedral Donated Frequently to Democrat PACs,” according to a guest post on Gateway Pundit by Chris Gleason, who has experience with the last Arizona election that was exposed as a botched election and hoax perpetrated on the American people.

Here is the story of Gleason:

The ballots in Maricopa County were printed by Runbeck Election Services in Phoenix, Arizona, but many questions remain about these particular ballots.

Where did thousands of mail-in ballots in pristine condition in Fulton County, Georgia, suddenly come from during the 2020 presidential election?

They were printed by Runbeck Election Services in Phoenix, Arizona, but there is something very suspicious about these ballots.

Who filed a U.S. Patent Application for a computer system for “on-screen ballot duplication” to be used for “generating a revised ballot”?

Kevin Runbeck is the Chairman and owner of Runbeck Election Services. 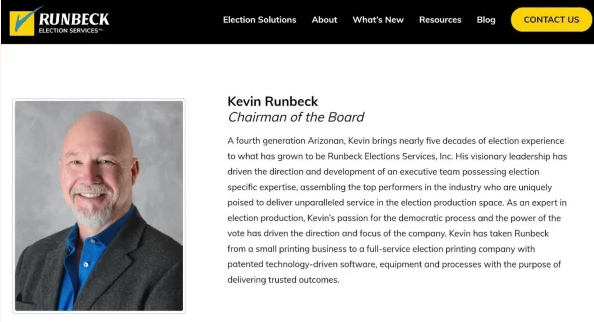 The Runbeck family lives in Arizona. They were very active donors to the Democrat party, Democrat candidates, and Democrat PACs. (TGP reported on these connections before.) CONTINUE READING…