U.S. passport applications will begin accepting gender ‘X’ on April 11, the U.S. State Department announced on Thursday, as the Biden administration celebrated ‘Transgender Day of Visibility’ for the mentally ill and brainwashed who are one gender but believe they are the other.

State Department officials said applicants may choose the ‘X’ marker regardless of their gender on their birth certificate or other official documents.

‘Starting on April 11, U.S. citizens will be able to select an X as their gender marker on their U.S. passport application, and the option will become available for other forms of documentation next year,’ said Secretary of State Antony Blinken.

On the passport application, a third gender option is available for nonbinary, intersex, and gender-nonconforming things. 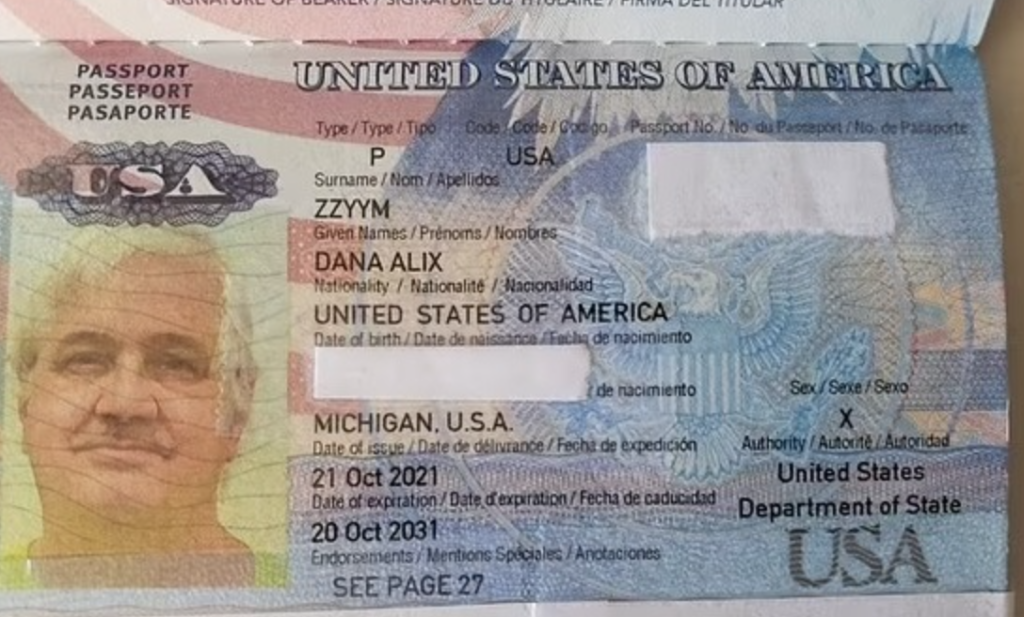 Furthermore, Stern added, ‘the provision of an ‘X’ gender marker option is important because human beings do not always fit within a male or female category around the world, the lived realities of transgender intersex, non-binary and gender-nonconforming persons reflects that there is a wider spectrum of humanity than is represented by a binary sex designation on passports.’

On the brink of WWIII and financial collapse but thankfully we fixed this problem. Thank you for saving us Mr. Secretary!

Transgender athletes were appropriately banned from participating in girls’ school sports by the Republican governors of Oklahoma and Arizona a day before the Biden administration announced the change.

The arguments over transgender and reproductive rights have heated up in the culture wars that have been raging in certain parts of the country. Normal people are becoming fed-up with perverts and pedophiles pushing their views on them.

In a speech Wednesday, President Biden lashed out at the ‘political attacks’ against transgender children coming from state legislators throughout the country, such as Florida’s bill that leftists call the “don’t say gay” law. The bill, which Governor DeSantis signed into law on Monday, merely bans pedophiles in the school system from attempting to brainwash children in kindergarten through the 3rd grade into believing they are a different gender than they were born.

Biden, taking the side of the non-normals, announced on ‘Transgender Visibility Day,’ ‘Visibility matters, and so many transgender, nonbinary, and gender-nonconforming Americans are thriving. Despite this progress, transgender Americans continue to face discrimination, harassment, and barriers to opportunity.’

Biden said that states had drafted ‘hundreds of anti-transgender bills.

‘Efforts to criminalize supportive medical care for transgender kids, to ban transgender children from playing sports, and to outlaw discussing LGBTQI+ people in schools undermine their humanity and corrode our Nation’s values.’

Arizona joins more than a dozen other states with restrictions on transgender participation in sports and is the third state to restrict health care options for transgender teens.

Up until two years ago, no states had passed laws regulating gender-specific youth sports. Yet since Idaho lawmakers enacted the nation’s first sports eligibility law in 2020, it has become a major issue in GOP-controlled states. The Idaho law, along with another in West Virginia, is now being challenged in court.

Republican legislators have argued that excluding transgender athletes from girls’ sports would protect the integrity of the sport, claiming that trans athletes would gain an advantage. Arizona’s governor shared that belief in his signature statement.

The controversy over transgender athletes participating in girls’ sports flared up again last week with a big victory for transgender collegiate swimmer Lia Thomas at the NCAA Championships for Women’s Division I Swimming and Diving.

This week, Republican governors of Utah and Indiana vetoed bills prohibiting transgender girls from competing in girls’ sports, saying the issue is almost unheard of in their states. Republican lawmakers in Utah overrode the governor’s veto on Friday, and Indiana lawmakers are considering doing likewise.

Gov. Ron DeSantis signed a bill on Monday that prohibits teachers from teaching about gender identity or sexual orientation in kindergarten through third grade.

Parents’ Rights in Education Bill, which was passed by the Florida state legislature this month, has been called the ‘Don’t Say Gay’ law by leftists who say that the bill bans any mention of being gay in Florida schools.

Moreover, Disney has also experienced backlash from customers and employees over not opposing the bill immediately when it was passed. The law becomes effective on July 1, and teachers who violate its rules can be sued by parents.

People who do not identify as male or female view the move to include the ‘X’ mark in passport applications as a significant step toward the recognition of their rights.

‘Every American deserves the freedom to be themselves. But far too many transgender Americans still face systemic barriers, discrimination, and acts of violence,’ the White House stated.

US citizens can now use a passport stamp to indicate a gender other than male or female, joining Australians, New Zealanders, Nepalese and Canadians.

By using the ‘X’ mark, travel is made easier, families with transgender children and their families can easily access federal services, and visibility in federal data is increased.