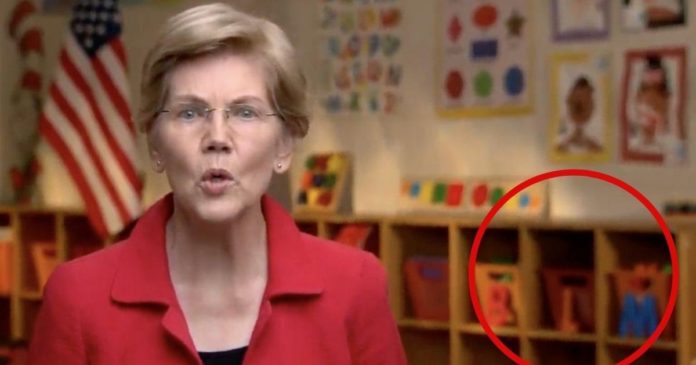 The 2020 Democratic National Convention has resulted in more embarrassing moments and thinly veiled virtue-signaling than most Americans have seen in entire lifetimes throughout history.

What may go down as the strangest virtue signal of the entire event, however, came on the third day of the convention, in the last place most viewers might have expected: the background.

As former 2020 Democratic presidential primary candidate and radical-left Sen. Elizabeth Warren addressed the convention from an early childhood education center in her home state of Massachusetts, the primary message was on the importance of child care.

But the secondary message was one American news consumers and political junkies have heard on repeat in recent weeks and months. It was the popular slogan “Black Lives Matter.”

"BLM" spelled out in blocks while Warren speaks pic.twitter.com/NTgsVpsAj3

The slogan once again entered the mainstream earlier this year, in light of the officer-involved deaths of unarmed black Americans George Floyd and Breonna Taylor.

Ever since, left-wing politicians and activists have clamored over one another to grip the microphone and repeat the truism of the day.

Warren’s Wednesday convention address revealed she is no different.

Unfortunately for Warren, however, the Democratic Party had scheduled more than enough politicians and public figures to address the popular issues of racial justice and police reform throughout the four-day event.

So, it seems Warren and her team may have decided to improvise, laying out the letters “BLM” visibly in the background of her videotaped address.

OK, so admittedly, I have absolutely no idea whether Warren and her team were responsible for the display.

As some of the sharp-eyed social media users who originally noticed the strange backdrop have noted, it may have been a subliminal message purposely left in the frame by Warren or the DNC’s organizers.

It may have been a simple attempt to virtue-signal to those sharp-eyed viewers at home.

Heck, it may even have been a total coincidence — the creation of students or faculty at the education center. (Of course, given the fact that Warren suggested the facility had been closed since the start of the ongoing COVID-19 pandemic, that is highly unlikely)

Either way, the display was tacky.