According to emails and documents uncovered by the Daily Caller News Foundation, Democratic Arizona Secretary of State and Governor-elect Katie Hobbs’ senior assistant threatened the Mohave County Board of Supervisors with prosecution if it did not certify her election results by Monday’s deadline.

Director of Elections for the State of Arizona Kori Lorick sent many letters and emails to members of the board, threatening them with criminal prosecution if they failed to certify the election results on time. According to the emails, the letters also included threats of litigation against the members for “nonfeasance.”

“The Secretary of State did contact our County and cited A.R.S. Section 16-1010 as a statute that could be used to prosecute [the board] if they did not certify the election,” Mohave County Attorney Matt Smith told the DCNF. As a Class 6 felony, conviction could result in up to two years of imprisonment for election officials who “fail to perform their duties” as required by law.

“The threat of legal action, including personally, came from the Arizona State Elections Director [Kori Lorick],” stated the board’s incoming chair, Supervisor Travis Linginfelter. Prior reporting indicated that the board members were threatened of prosecution by their attorney; however, the board members have since revealed that Lorick, who also answers to Hobbs, made the threats. 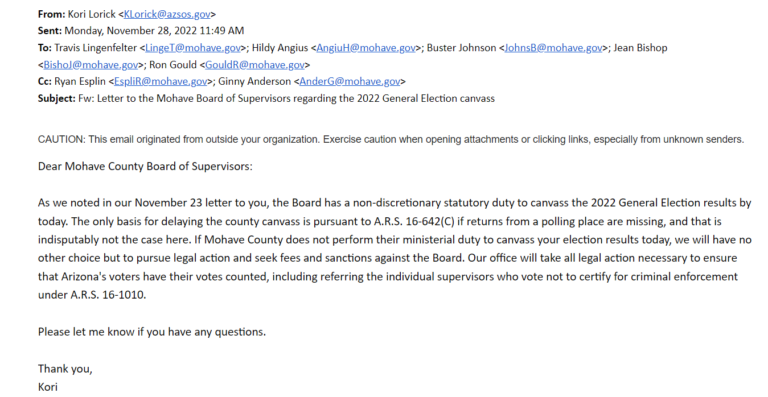 Hobbs’ team made many attempts, including Lorick’s threat of prosecution, to get Mohave County to certify its election results before the November 28 state deadline. Concerned that the Secretary of State’s office had not properly approved the voting machines used in their precincts, Republican members of the board sought to hold public hearings regarding the validity of the voting machines used in their precincts, as had been the case in other counties of the state.

Lorick also warned the board in a letter that their voters might be “disenfranchised” if they failed to certify by the deadline. The letter, obtained exclusively by the DCNF from Lingenfelter, states that the board “has a non-discretionary duty to canvass the returns of the election,” and that failure to do so “will only serve to disenfranchise that county’s voters,” echoing her warnings to other GOP-led counties that their votes “may be excluded” from the final tally, thus affecting the results.

Mohave County was one of several counties that requested additional time to evaluate election integrity problems, but it is the only county in which elected officials were reportedly threatened with incarceration. Cochise County, another Republican-controlled county in Arizona that has not declared its election results, is now the subject of a lawsuit filed by Hobbs’ office, but none of the county’s Republicans have reported criminal prosecution.

The Mohave County board finally certified the election results on Monday, November 28, before the deadline passed; nevertheless, the possibility of individual legal ramifications for board members may have affected their willingness to delay certification, as in the case of Cochise. During the television broadcast of the board’s canvass meeting, Chairman and Supervisor Ron Gould stated that the acts were taken “under duress.”

35-Year-Old Former NFL Player Says He Almost Died from a Stroke, Can’t Believe It: ‘God Not Done with Me Yet’

A former NFL defensive lineman has revealed that he nearly died from a stroke. Chris...
Politics

In a post on his social media site, Truth Social, former President Donald Trump...
US News

SHAMEFUL: Jesus Christ Superstar is resurrected with a non-binary actor taking lead role of Jesus and Judas being played by a woman

The left is anxious to demolish Christianity and people's trust in God, and here...