Joe Biden, a Democrat, appears to be evading any investigation over the part he played in the most significant financial scandal in a generation, which directly implicates him, while others implicated in the scam are receiving severe punishments.

We are aware that the leading Democratic contributor is the same discredited crypto millionaire, Sam Bankman-Fried, who met with Biden officials at least four times in 2022, including a September meeting with White House advisor Steve Ricchetti.

Prosecutors allege that Bankman-Fried used FTX as a “personal piggy bank” to transfer money into his other firm, Alameda, and that a nexus existed and is now quite apparent, demonstrating how money was laundered through US Civil Servants, other nations, and back to Bankman.

On January 3, he will be charged in a Manhattan court for his participation in the crime, and if convicted of all counts, he faces 115 years in jail.

Things are difficult for him, although Biden and other Democrats who profited from his money are free to walk about Washington, D.C.

“Following his December 12 arrest in the Bahamas, Bankman-Fried was held in the notorious Fox Hill Prison, where inmates are reportedly crammed in cells with multiple other inmates, without access to running water or other means of basic hygiene,” the Daily Mail reported earlier in December.

Earlier reports said that Bankman-Fried was detained in the prison’s sickbay, called “Fox Hell” by scared residents, where he received special treatment over other offenders.

“Sam Bankman-Fried, the CEO of FTX cryptocurrency exchange, announced in May that he would donate “north of $100 million” and up to a “soft ceiling” of $1 billion for the Democrat candidate running against President Donald Trump in the 2024 race,” Jim Hoft reported for the Gateway Pundit, adding:

“Bankman-Fried donated over $40 million to Democrats in the 2022 midterm elections.

FTX was laundering money from Ukraine and moving millions to donate to Democrats in the 2022 midterms.

It was a nifty trick by Democrats to get some easy campaign cash.”

Elon Musk stated earlier this month that donations to Democrats were likely far bigger than the $40 million reported, even as high as $1 billion! 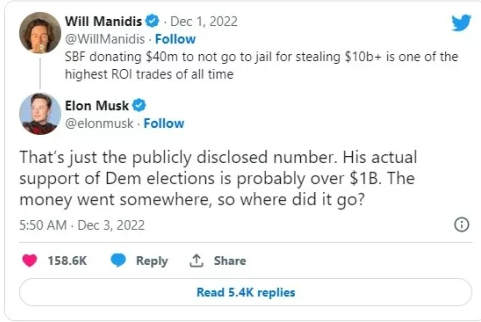 Hoft said that he believes the truth likely lies somewhere between the two estimates, based on media allegations that “Ukraine funneled millions, if not billions, of international donations into FTX, Bankman-Fried’s company before it went belly-up.”

The Daily Mail reported on the situation and provided more evidence indicating the number is possibly greater than previously estimated.

Disgraced cryptocurrency mogul Sam Bankman-Fried met with four Biden officials this year before the collapse of his FTX empire and his arrest in the Bahamas.

The Democratic donor, 30, awaiting trial for what prosecutors say is one of the biggest financial frauds in U.S. history, held talks with senior White House advisor Steve Ricchetti on September 8, Bloomberg reported Thursday.

He has had at least two other meetings with Ricchetti on April 22 and May 12 and another with top aide Bruce Reed.

Bankman-Fried’s brother Gabriel also participated in a meeting on his own on May 13.

The latest report is further evidence of the deep ties Bankman-Fried had with Washington before he was charged with defrauding investors out of at least $1.8 billion. CONTINUE READING…