Katie Hobbs, a Democrat, was elected as the next governor of Arizona in a highly peculiar race, which President Donald J. Trump emphasized.

“They just stole the election from Kari Lake”: Trump intervenes after his candidate loses to Democrat Katie Hobbs, who switched the state blue in the campaign to be the next governor of Arizona, only hours before his scheduled announcement for 2024.

Trump shared his election-related sentiments on his Truth social account.

“His candidate Kari Lake suffered a shocking defeat to Democrat Katie Hobbs, and Lake has also made unproven claims of voter fraud in the gubernatorial election,” according to the pro-leftist media coverage.

“Donald Trump says Kari Lake had the race for Arizona governor race stolen from her after her defeat to Democratic rival Katie Hobbs and just hours before he is set to announce his third fun for president,” Jack Newman reported for the Daily Mail, adding:

“Lake, a vocal MAGA supporter who backed Trump’s claims of 2020 voter fraud, suffered a shock defeat to Democrat Katie Hobbs, which she also claimed was fixed. Soon after the race was called, rather than conceding gracefully, Lake took to Twitter to say: ‘Arizonans know BS when they see it.’ Trump added fuel to the flames on Truth Social, where he posted: ‘Wow! They just took the election away from Kari Lake. It’s really bad out there!”

Arizonans know BS when they see it. 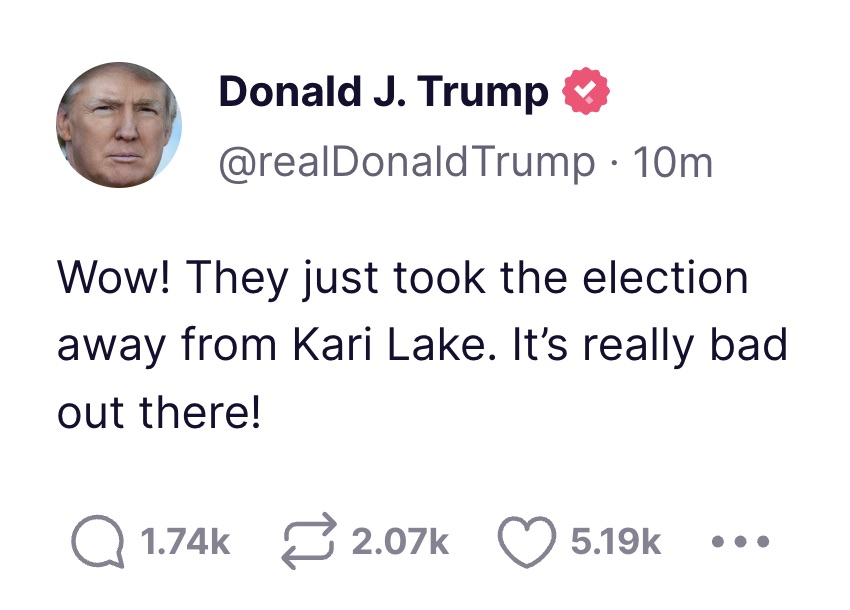 Notable was Newman’s delight about the prospect of more unethical elections upon hearing the news:

“The upset could not come at a worse time for Trump, still reeling from a series of devastating losses from his candidates in the midterms, as he prepares to make a ‘big announcement’ today at Mar-a-Lago.

Many in the Republican party says his push to have election deniers on the ballot squandered their hopes of a red wave, but he has claimed most of the candidates he backed won and those who lost didn’t push election fraud hard enough.”

Without any regard for the voters, Newman is dismissing the enormous worries that people have over the clear difficulties in Arizona with machines deliberately operating on low toner, being unable to count, and votes being mixed at the polling places.

What the left and RINO right was concerned about was what Trump’s announcement would be on Tuesday:

“The former president has now been urged by senior Republicans not to run again in 2024, but he is still expected to mount a dogged campaign. Over the weekend, he was at his Palm Beach club with his family watching his youngest daughter Tiffany get married to her billionaire partner Michael Boulos,” Newman reported. CONTINUE READING…