The FBI raid on President Donald J. Trump’s Florida home earlier in August exposed the opponents of Trump’s alliances, and how they have coordinated to work against him- and against the American people from their powerful positions in Washington DC.

A new report shows that there is a good likelihood that the raid on Trump’s home involves the same Never Trumper personalities we have learned so much about, who have been involved in an obvious orchestrated plot to target Trump and his supporters.

In 2015 and 2016, when Trump talked about ‘draining the swamp’ the majority of Americans knew they felt oppressed by a massively huge federal government, but they didn’t have any names to attribute that pain to, until Trump came along.

By 2022 the majority of Americans recall that a man named Peter Stzrok was the FBI agent who was sending seductive texts to his girlfriend, another FBI agent, ahead of Trump’s 2016 presidential victory, telling her that he was going to “stop ” Trump when she was getting hysterical at the idea of Trump winning.

There is still much to learn about these people, as uncovered in one recent news report, even regular Americans know the story of the bias of Peter Stzrok:

And now we really understand that the lapdog media propagandize information for people with government power by presenting disinformation and misdirecting people.

Just this week, Never Trumper Joe Scarborough, host of a morning program, who has brought in Never Trumper Peter Stzrok to talk about the suspicious raid on Trump and to calm the public’s fears about the political weaponization of the FBI.

It is almost shocking, watch:

“It’s not that the FBI is targeting any one side or the other, what you see is the FBI going out on the day-in, day-out basis of objectively investigating allegations of law,” said Strzok.

Of all people, MSNBC trots out Peter stzrok to defend the FBI’s integrity … you cannot make this up pic.twitter.com/v4pKhUkugx

One response to the idea of Ptsrok defending the FBI was perfect:

Former FBI agent Peter Strzok: “It’s not that the FBI is targeting any one side or the other. What you see is the FBI going out on a day-in and day-out basis objectively investigating allegations of law.”pic.twitter.com/vxGlIQzR7f

@seanhannity
Having Peter Stzrok vouch for FBIs credibility is like having Jeffery Dahlmers vouch for the character of John Wayne Gacy…
& they’re all just as rotten as the elites on #morningjoe
Thanks for being one of last voices along w/Pres Trump standing up for Americans!

And, one digital media group added important details to the story of how suspicious Strzok really is.

The brazen raid of President Trump’s home in Florida, Mar-a-Lago, likely has its roots in the Russia collusion story with a particular focus on Peter Strzok and his affiliation with the CIA.

We reported back in May 2020 that Peter Strzok was somehow connected to the CIA. General Michael Flynn’s attorney Sidney Powell even said so on Hannity’s show on FOX News at that time:

Sidney Powell was on Hannity last night on FOX News after the breaking news that her client, General Michael Flynn, had his case dismissed by the DOJ earlier in the day. Powell shared:

This was a deliberate, malevolent, concerted effort to destroy an honest man and thereby get to the President of the United States to destroy him. There’s no doubt about it whatsoever.

I would encourage people to read the actual documents themselves. The government’s own reports, the agent’s own notes, they’re all attached as exhibits to the government’s filing today and our filings in the last ten days or so.

It’s important for people to see it for themselves, the actual evidence in the government’s own handwriting and documents….

Hannity asked what did Obama know and when did he know it, to which, Powell replied:

Probably Susan Rice and Peter Strzok, who was working for both Mr. Brennan in the CIA and the FBI on the quote ‘counterintelligence investigation’. We have to go back to at least August 15, of 2016 when Strzok and Page text each other about the insurance policy they discussed in McCabe’s office.

It’s the very next day, August 16, 2016, before the election when they opened the file on General Flynn.

The day after that they slipped an agent [believed to be Joe Pientka] into the Presidential briefing to spy on General Flynn.

Strzok’s history shows that he left the Army and was immediately assigned to the White House. (See picture above of Strzok in the late 1990’s in the Clinton White House.) When did Strzok have time to attend the FBI academy if he went directly to the White House?

Hoft offers this document as proof: 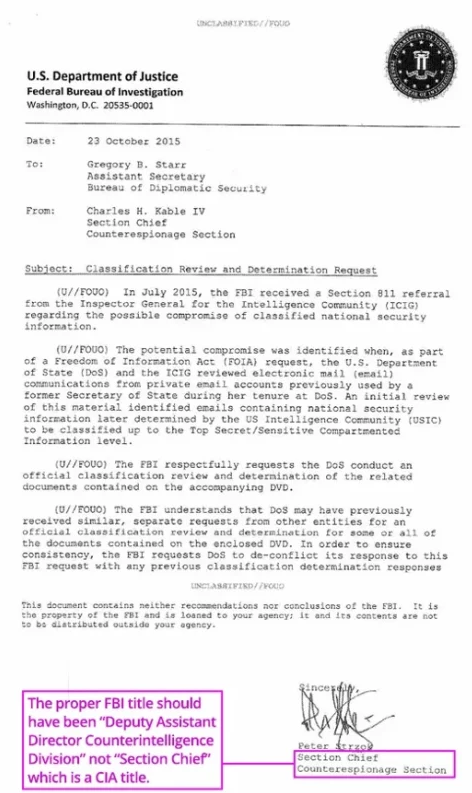 “It appears Peter Strzok was under the FBI to allow the CIA to operate in the US and that Crossfire Hurricane was a political operation by the CIA disguised as an FBI operation,” Hoft reported.

American voters see no end to the economic destruction under President Joe Biden, with...
ConservativePatirots