Biden’s speech and the color and imagery behind him are being called “Satanic” and Hitlerian. Indeed, Biden’s choice of backdrop did look like Satan himself designed it.

What is going on here and who thought this lighting was a good idea? pic.twitter.com/hU58lMqxZZ

On Twitter, a hashtag trend of #PedoHitler went viral.

I Think Biden's Speech May Have Backfired On Him A Bit #PedoHitler pic.twitter.com/KznM9YSbFo

“Joe Biden deliberately chose the Satanic looking backdrop for his speech tonight. He is truly an evil man. You don’t have to dig too deep to know this. Just look at how Hunter Biden turned out. Read Ashley Biden’s diary entries about him taking showers with her. #PedoHitler”

He is truly an evil man. You don’t have to dig too deep to know this. Just look at how Hunter Biden turned out. Read Ashley Biden’s diary entries about him taking showers with her.#PedoHitler pic.twitter.com/GjbczpOJE2

During his speech which many are saying was designed to get Trump supporters to commit acts of violence (don’t fall for the bait), he railed on “MAGA Republicans” saying that they are a threat to the nation. Biden even seemed to push for violence against those who support former President Trump.

“As I stand here tonight, equality and democracy are under assault. We do ourselves no favor to pretend otherwise,” Biden maniacally declared.

So tonight, I have come this place where it all began to speak as plainly as I can to the nation about the threats we face, about the power we have in our own hands to meet these threats, and about the incredible future that lies in front of us if only we choose it.

“Donald Trump and the MAGA Republicans represent an extremism that threatens the very foundations of our republic,” Biden insisted to the cheering crowd of socialists.

BIDEN: "Donald Trump and the MAGA Republicans represent an extremism that threatens the very foundation of our Republic…" pic.twitter.com/eXtiEeL5c6

Biden said not “all Republicans” are MAGA. He most likely meant those Republicans who voted with Democrats to impeach Trump and Liz Cheney and Adam Kinzinger who are on the January 6th inquisition committee.

Biden continued his diatribe saying “the Republican Party today is dominated, driven, and intimidated by Donald Trump and the MAGA Republicans, and that is a threat to this country!!!”

…here, in my view, is what is true: MAGA Republicans do not respect the Constitution. They do not believe in the rule of law. They do not recognize the will of the people.

They refuse to accept the results of a free election. And they’re working right now, as I speak, in state after state to give power to decide elections in America to partisans and cronies, empowering election deniers to undermine democracy itself.

Biden continued his assault on half of America:

They promote authoritarian leaders, and they fan the flames of political violence that are a threat to our personal rights, to the pursuit of justice, to the rule of law, to the very soul of this country.

They look at the mob that stormed the United States Capitol on January 6th — brutally attacking law enforcement — not as insurrectionists who placed a dagger to the throat of our democracy, but they look at them as patriots.

And they see their MAGA failure to stop a peaceful transfer of power after the 2020 election as preparation for the 2022 and 2024 elections.

They tried everything last time to nullify the votes of 81 million people. This time, they’re determined to succeed in thwarting the will of the people.

That’s why respected conservatives, like Federal Circuit Court Judge Michael Luttig, has called Trump and the extreme MAGA Republicans, quote, a “clear and present danger” to our democracy.

“And, folks, it is within our power, it’s in our hands — yours and mine — to stop the assault on American democracy,” Biden said, seemingly alluding to the use of force against his opponents.

MAGA Republicans have made their choice. They embrace anger. They thrive on chaos. They live not in the light of truth but in the shadow of lies.

Biden: “MAGA Republicans…embrace anger. They thrive on chaos. They live not in the light of truth, but in the shadow of lies.” pic.twitter.com/xKju8T13cl

MAGA Republicans look at America and see carnage and darkness and despair. They spread fear and lies –- lies told for profit and power.

Biden then lied about “MAGA. When Trump was president all boats were lifted and women and different races saw historic gains in wages and employment.

But Biden said that “The MAGA Republicans believe that for them to succeed, everyone else has to fail. They believe America — not like I believe about America.”

“If you look at the words and meaning of the awkward and angry Biden speech tonight, he threatened America, including with the possible use of military force. He must be insane, or suffering from late stage dementia!” 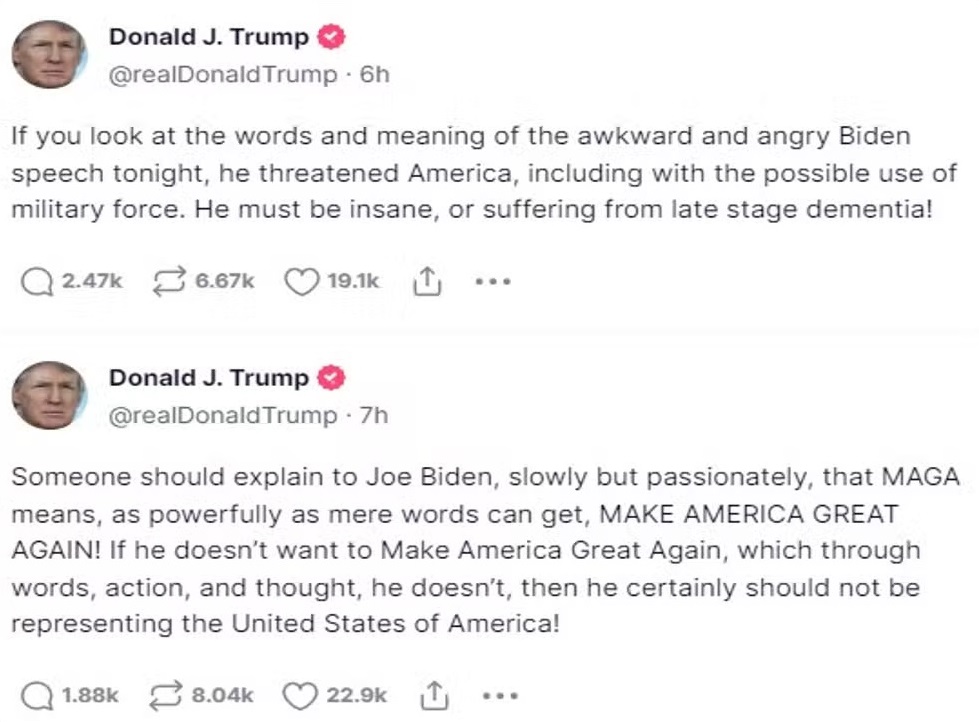 Trump prior to that posted:

“Someone should explain to Joe Biden, slowly but passionately, that MAGA means, as powerfully as mere words can get, MAKE AMERICA GREAT AGAIN! If he doesn’t want to Make America Great Again, which through words, action, and thought, he doesn’t, then he certainly should not be representing the United States of America!”