President Donald J. Trump is being abused by the administrative state over the political FBI raid on his family home, just like every other common American, being called names, having his rights trashed and being maligned in the media. And all of this highly public abuse is only going to make the billionaire underdog all that much more popular to voters.

The public sees a man who has faced six years of constant abuse from DC insiders and massive corporate harassment who is fighting back through the lawfare to retain his civil liberties.

“Defiant Trump responds to bombshell DOJ Mar-a-Lago court filing – and claims his possession of ‘sensitive information shouldn’t have been ’cause for alarm’ because he was president,” Elizabeth Elkind of Daily Mail reported on Thursday.

Earlier in the week, Democrat Joe Biden’s Department of Justice (DOJ) accused Trump and his lawyers of having ‘concealed and removed’ classified documents in order to ‘obstruct’ its corrupt probe- even going so far as to have highly suspicious photos published late Tuesday night, that showed ‘documents on the floor’ being hidden in plain sight.

The bizarre photo of documents on the ground at Trump’s Florida home that the public was told was being hidden from the FBI came just a day before Trump’s 8 PM deadline to respond to a court filing Wednesday. 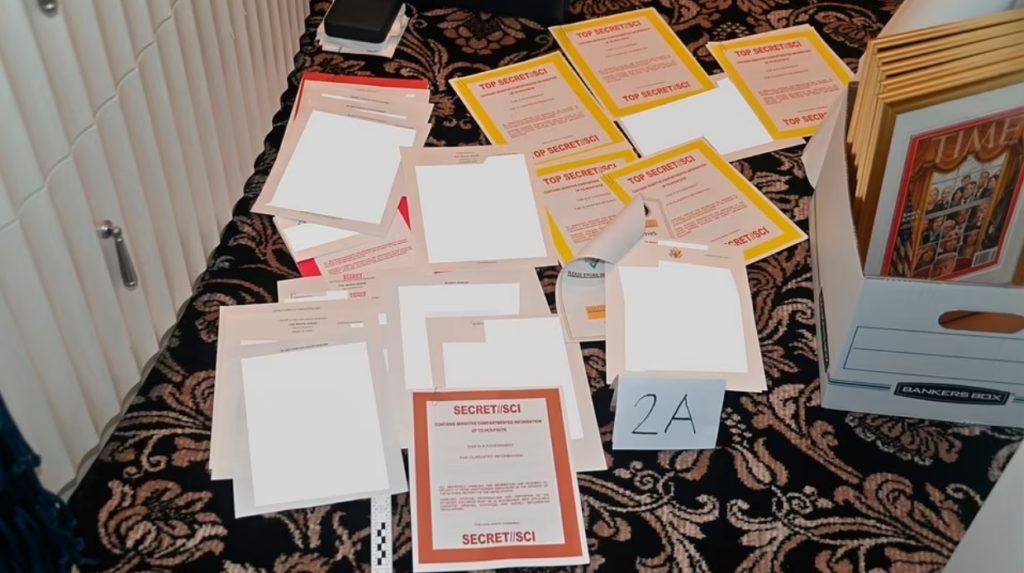 Trump then responded to the DOJ’s bombastic filing with his own 19-page response It comes after several angry posts targeting the FBI he made on Truth Social, slamming the agency for its corrupt practices.

“Donald Trump’s lawyers contended Wednesday that the Department of Justice is trampling on his rights and demanded an independent review of materials the FBI seized from his Mar-a-Lago estate.

But the former president’s lawyers sidestepped the most serious obstruction-of-justice claims prosecutors aired against him just hours earlier, and Trump’s legal team notably avoided echoing an assertion their client resurfaced earlier in the day: that he had declassified the documents at issue in the dispute.”

U.S. District Judge Aileen Cannon set a hearing in the case for Thursday.

“The ex-president’s legal team is hitting back at the DOJ’s arguments against appointing a special master to oversee the classified documents recovered from Mar-a-Lago by the FBI during an unannounced search earlier this month,” Elkind reported.

Trump’s legal team claims they are entitled to be represented in a review of the documents seized, arguing that the government’s review of privileged information is too one-sided, and the Democrats are acting in bad faith.

From the court documents:

“Three weeks after an unprecedented, unnecessary, and legally unsupported raid on the home of a President—and possibly a candidate against the current chief executive in 2024—the Government, represented by the Department of Justice (“DOJ”) and the United States Attorney’s Office, has filed an extraordinary document with this Court, suggesting that the DOJ, and the DOJ alone, should be entrusted with the responsibility of evaluating its unjustified pursuit of criminalizing a former President’s possession of personal and Presidential records in a secure setting.

Now, the Government twists the framework of responding to a motion for a Special Master into an all-encompassing challenge to any judicial consideration, presently or in the future, of any aspect of its unprecedented behavior in this investigation. 1 Its argument against oversight begins with a contention that somehow the Movant lacks standing to object to a search of his home.

The convoluted theory, which appears to be that the Biden administration will not allow President Trump to assert executive privilege and consequently he has “no right” to possess Presidential documents, and that, therefore, he has no standing to object to their seizure, is contrary to the well established doctrine of standing.”

The DOJ’s 36-page Tuesday filing is a damning account of investigators’ attempts to recover classified documents that Trump improperly took home with him after leaving the White House.

It accuses Trump and his lawyers of having deliberately hidden records from investigators, claiming documents were ‘likely concealed and removed in order to ‘obstruct’ the probe.

In his Wednesday filing, Trump attempts to dismiss the very origins of the DOJ’s investigation by arguing his possession of ‘sensitive’ documents should not have been concerning for the National Archives – which first raised alarms about the ex-president’s handling of classified documents in January 2021.

‘The purported justification for the initiation of this criminal probe was the alleged discovery of sensitive information contained within the 15 boxes of Presidential records,’ the court papers state.

“After U.S. District Judge Aileen Cannon signaled her openness to grant Trump’s request for a third-party official to review what the DOJ seized, prosecutors submitted a filing indicating that a so-called ‘privilege review team’ was engaged in much of the same work.

They argue that appointing a special master would be superfluous and potentially imperil their investigation given the highly classified nature of documents that were recovered,” Elkind reported.

But Trump’s Wednesday court filing calls the privilege review team ‘highly deficient’ and claims the DOJ presented an over-broad picture of its search in Tuesday’s filing – despite the extraordinary detail investigators delved into to reveal that they even went into the ex-president’s personal desks.