Donald Trump has thrown his support behind Sarah Palin’s campaign for Alaska’s one and only House of Representatives seat.

According to a statement published by the 45th President of the United States on Sunday, ‘Wonderful patriot Sarah Palin of Alaska has just announced she is running for Congress, and that means there will be a true America first fighter on the ballot to replace the late and legendary Congressman Don Young.’

Trump acknowledged that he endorsed Palin as a thank-you for her endorsement of him for president in January 2016 when Trump’s campaign was still widely considered a stunt.

Then he added: ‘Now it’s my turn!’ Then Trump took a shot at his old foe John McCain, who chose Palin for his vice presidential run in 2008, in which he eventually lost to Barack Obama.

According to the former president: ‘Sarah lifted the McCain presidential campaign out of the dumps, despite the fact that she had to endure some very evil, stupid and jealous people within the campaign itself.’

Despite Trump’s lack of naming names, the feud between Trump and McCain is well known.

Even after the former Arizona senator died, he continued to criticize him.

As Trump put it: ‘Sarah Palin is tough and smart and will never back down, and I am proud to give her my Complete and Total endorsement, and encourage all Republicans to unite behind this wonderful person and her campaign to put America First!’ 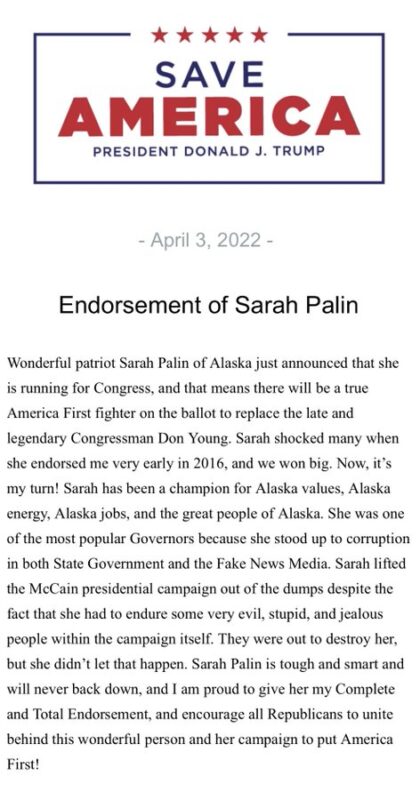 58-year-old Palin is seeking to replace the late Representative Don Young, who passed away on March 18 as he boarded a flight from LA to Seattle, after a 49-year career in Washington, DC.

This year, Palin could get back into power in the November 8 election.

The former Alaska governor launched a congressional bid Friday, portraying herself as a practical candidate who will look for common-sense solutions to woke problems.

According to her: ‘America is at a tipping point.

‘As I’ve watched the far left destroy the country, I knew I had to step up and join the fight.

‘The people of the great State of Alaska, like others all over the country, are struggling with out-of-control inflation, empty shelves, and gas prices that are among the highest in the world.

‘We need energy security for this country, and Alaska can help provide that — but only if the federal government gets out of the way and lets the free market do what it does best.’

The former local TV sportscaster intends to return to politics after a stint in showbusiness that included an appearance on The Masked Singer.

Currently, she has five children and eight grandchildren, including her youngest son, Trig, who has Down syndrome. Trig was born in 2008.

Todd Palin filed for divorce from Palin in 2019, citing “incompatibility of temperaments.”.

In the interim, she has been seen with former NHL player Ron Duguay, who she describes as her “buddy.”

According to a new poll released last week, if the 2024 election were held today, both President Biden and Vice President Harris would lose to Trump.

The results for Harris are even worse than for her boss, as she trails Trump by 11 percentage points.

According to the hypothetical vote, Kamala received 38 percent of the vote, while Trump received 49 percent, which is two points higher than the Trump-Biden matchup.

As for Trump, he has repeatedly hinted at a 2024 run but has not said for sure he will run.

As a result, when Biden selected Harris as his running mate, making history in the process, it was widely predicted that she would take up his mantle after he retired at 79.

Yet, because of her deep unpopularity, which is worse than Biden’s, left-wing operatives are worried about who to put up in the next presidential race.

Harris does come out on top when matched against Florida Governor Ron DeSantis in a hypothetical contest. According to the Harvard poll, the GOP governor received 38 percent of support, while Harris earned 40 percent.

As a former House Republican, he was elected to lead Florida with Trump’s support and has demonstrated strong leadership within the GOP, particularly in critiquing the Biden administration and opposing COVID mandates.

According to several GOP voter polls, he trails Trump in the race for 2024, but the former president is widely seen as the favorite candidate so far.

It is still a long way off until the presidential election, but Biden’s unpopularity remains a negative sign for Democrats seeking to retain their slim majority in November.

It was revealed on Sunday that a recent NBC poll shows the Republicans have a slight edge over the Democrats when it comes to the upcoming elections. Among registered voters, 46 percent said they would prefer the Republicans to control Congress by 2023, compared to 44 percent who support the Democrat Party remaining in power.