An event that has sparked incredulous reactions around the world, it marks the first time in U.S. history that the home of a former president has been raided.

It has been reported that no evidence against Trump has been found as yet.

Trump confirmed the raid in a statement Monday evening, saying the move represented ‘dark times for our Nation,’ pushing that the Biden administration was going after him as a political target.

“Nothing like this has ever happened to a President of the United States before,” Trump posted.

“After working and cooperating with the relevant government agencies, this unannounced raid on my home was not necessary or appropriate. It is prosecutorial misconduct, the weaponization of the justice system…” he added.

Trump has not announced his candidacy for a 2024 presidential run, but insiders say he is contemplating doing so.

A number of media outlets reported that the raid stemmed from an investigation into Trump removing classified documents from the White House and not the Department of Justice’s current probe into January 6, which is also partially focused on Trump.

The House select committee on January 6 is also investigating the January 6 Capitol attack and Trump’s action surrounding it.

Although fingers are pointed at the Biden administration, the White House has insisted its hands are clean.

During Tuesday’s press briefing, press secretary Karine Jean-Pierre said Biden ‘was not briefed’ ahead of the Monday raid.

The president, she said, ‘was not aware of it.’

‘No one at the White House was given a heads up,’ Jean-Pierre said.

A number of Trump allies have called on Attorney General Merrick Garland to speak publicly about the raid.

So far he hasn’t commented.

So no one is taking responsibility for ordering the search.

But a number of public officials have called for an explanation.

“The country deserves a thorough and immediate explanation of what led to the events of Monday,” said Senate Minority Leader Mitch McConnell Tuesday night.

“Attorney General Garland and the Department of Justice should already have provided answers to the American people and must do so immediately.”

McConnell, who had a falling out with Trump over the ex-president’s false election fraud claims, had previously not commented on the raid, but then did respond just over 24 hours after the event happened.

In addition to the Jan 6 probe and the allegations regarding Trump holding documents, there are other investigations trying to find incriminating evidence against the former president.

In Georgia, Fulton County District Attorney Fani Willis is investigating the scheme to run over the state’s 2020 presidential election result.

And in New York, Manhattan District Attorney Alvin Bragg is looking into whether Trump’s companies misrepresented the value of properties for loan and tax purposes.

Trump himself did not waste time responding to the raid on his home, and soon after posted a statement, followed hours later by a video that he posted on social media.

The former President on Tuesday claimed President Joe Biden knew about the FBI’s raid of Mar-a-Lago in advance, something the White House has denied. 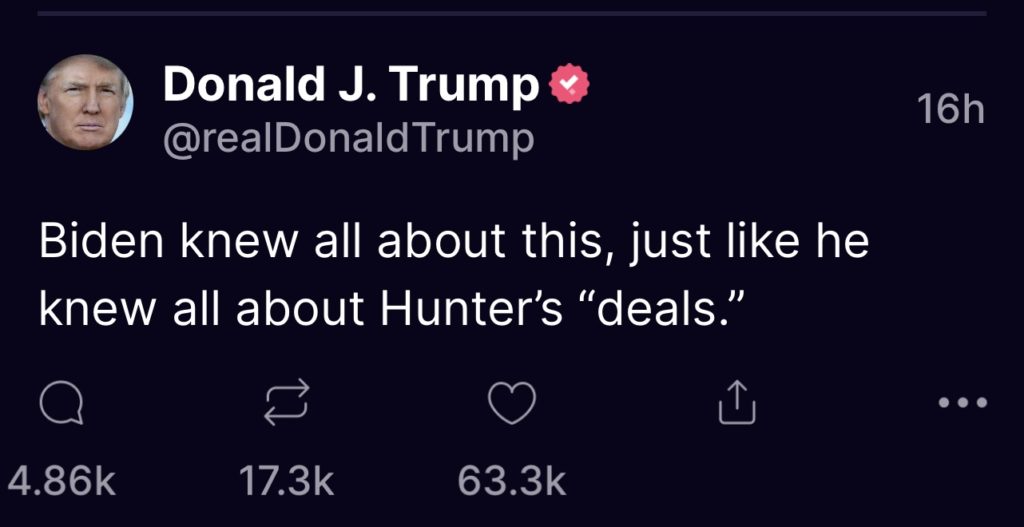 Hunter Biden’s foreign business dealings have attracted controversy, though the president has denied being involved in them.

Trump also pushed that the Mar-a-Lago raid was a continuation of politically motivated investigations against him.

‘A horrible thing that took place yesterday at Mar-a-Lago,’ he wrote. ‘We are no better than a third world country, a banana republic.’

‘To make matters worse it is all, in my opinion, a coordinated attack with Radical Left Democrat state & local D.A.’s & A.G.’s,’ the former president added. 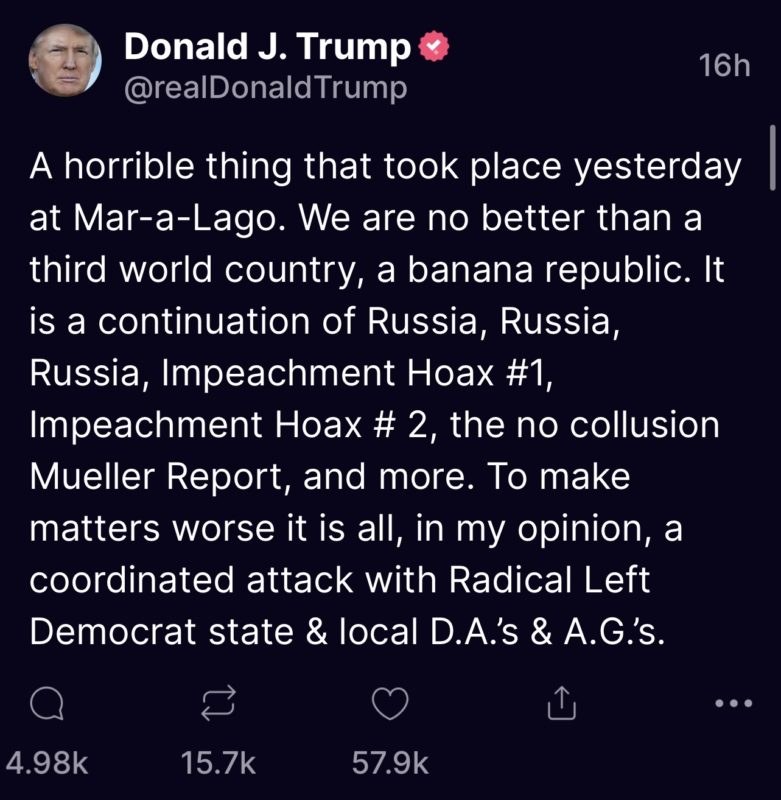 In a campaign-style video Tuesday morning, Trump insisted that ‘we are a nation that has weaponized its law enforcement against the opposing political party, like never before.’

‘What took place yesterday, and long before, was an unprecedented infringement of the rights of every American citizen,’ he said in a third Truth Social post Tuesday night.

‘Scam after Scam, year after year, it is all the Radical Left Democrats really know, it is their lifeblood – they have no shame. Our Country is paying a very big price!!!’ he added.