Donald Trump made an announcement today that we will be holding a news conference on January 6, on the one year anniversary of the US capitol riots, which Democrats have adamantly blamed him for enabling.

This news conference will be held at his resort in Palm Beach, Florida. In a statement released by Trump he said he will speak about the events of that day, in which patriots marched to the capitol after listening to him speak outside the White House.

TRENDING: WATCH: AMERICA Needs And Has A Savior! It’s Not Trump; It’s Someone Much Higher

“Trump told the crowd of supporters he would never concede the Nov. 3 election and urged them to “fight like hell” before they went to the Capitol, where lawmakers were preparing to certify Democrat Joe Biden’s victory.

Four people died on the day of the riot, and one Capitol police officer died the next day of injuries sustained while defending Congress. Hundreds of police were injured during the multi-hour onslaught by Trump supporters, and four officers have since taken their own lives.

More than 700 people have been arrested in connection with the assault on the Capitol.”

Trump statement that was released by his team is below:

‘Why isn’t the Unselect Committee of highly partisan political hacks investigating the CAUSE of the January 6th protest, which was the rigged Presidential Election of 2020? Does anybody notice that they want to stay as far away from that topic as possible, the numbers don’t work for them, or even come close,’ Trump said through his Save America PAC. ‘The only thing they can do is not talk about it.’ 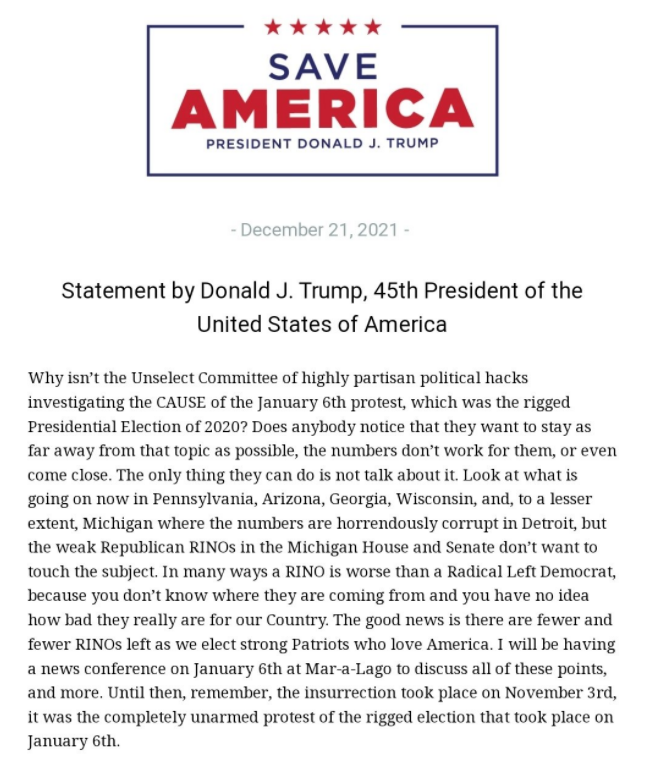 However, while Trump holds his press conference in Florida, lawmakers at the Capitol are preparing for a day full of events including introspective discussions looking back at the riot and a silent vigil.

‘Our nation will soon mark one year since the January 6th deadly attack on the United States Capitol. While the House will not be in session that week, a number of Members have expressed interest in being involved in commemoration activities,’ Pelosi wrote in a letter addressed to her Democratic colleagues.

‘Already, preparations are underway for a full program of events, including a discussion among historians about the narrative of that day; an opportunity for Members to share their experiences and reflections from that day; and a prayerful vigil in the evening.’

Those events will all be live streamed, she said, ‘so that Members can watch and participate from their districts.’

‘As always, we will continue to work with the House Historian to establish and preserve our records in this regard,’ Pelosi said.

Following these events Pelosi and democrats setup a very partisan committee to investigate the actions that took place on January 6th.

The committee has gone after Trump’s closest inner circle in attempt to get information to use against Trump. With the indictment of his senior advisor Stephen Bannon for contempt, they hoped to obtain crucial evidence against the former president. However, it appears to be backfiring as Bannon’s legal team effectively flipped the script.

“The committee had no comment on Trump’s announcement, a spokesman said.

A federal appeals court this month rejected Trump’s request to withhold documents from the committee because of executive privilege, noting that Biden, as president, has already authorized their release.

A spokesman for House of Representatives Speaker Nancy Pelosi, a Democrat, did not immediately return a request for comment.”