Donald Trump has had a good few weeks.

Last Friday it was revealed that in a hypothetical matchup, Trump would beat Biden handily if the two were to run against each other for president.

A Heartland/Rasmussen survey noted that “A majority of voters think President Joe Biden shouldn’t seek reelection in 2024, and he would lose a rematch with former President Donald Trump by double-digit margins.”

“Sixty-one percent (61%) of likely U.S. voters believe Biden should not run for a second term as president in 2024. Only 28% say Biden should seek reelection, while another 11% are not sure. If the next presidential election were held today, and Biden were running against Trump, 50% would vote for Trump while 36% would vote for Biden.”

Then, on Tuesday, a federal district court judge appointed by former president Trump denied a request from the Department of Homeland Security to throw out the lawsuit against the administration of President Joe Biden for its Catch and Release policy, which allowed tens of thousands of border crossers and illegal immigrants into the country since January 2021.

Florida’s lawsuit had been requested by Biden’s DHS to be thrown out. The judge apparently rebuked the agency’s arguments and denied their request last week.

In an interview with the Financial Times, Musk said that the ban “was morally wrong and flat out stupid.”

Earlier this month, Trump said he was “probably” not returning to Twitter if Musk restored his account.

Speaking to Sirius XM’s Americano Media, Trump said he “probably wouldn’t have any interest” in going back to the platform. He had around 90 million followers on the social media giant.

While Trump says that he’s not coming back to the platform, he does have the option. And on Fox News yesterday, one guest had a good idea. He said Trump should join Twitter again, Tweet “I’m back!” And then use Twitter to promote his Truth Social media platform. Genius.

And the wins keep coming. Trump just made a ton of money in a record-breaking deal.

According to Newsweek, Trump’s flagship hotel in the swamp that is Washington D.C. has been sold.

The Trump International Hotel, located just a short distance from the White House, is to be converted to a Waldorf Astoria after the Trump Organization agreed to sell the lease on the Old Post Office building to CGI Merchant Group for a reported $375 million.

“As a family, it has been an honor and a privilege to redevelop the Nation’s Old Post Office,” Eric Trump, one of the former president’s sons and executive vice president of the Trump Organization, said in the statement.

“We took a dilapidated and underutilized government building and transformed it into one of the most iconic hotels in the world.”

In a statement posted on his Truth Social account, Donald Trump added: “The redevelopment of the long vacant and dilapidated Old Post Office in Washington, D.C. was both a great honor and achievement for The Trump Organization.

“We created a true masterpiece, and know that it will do much to glorify our Nation for many years to come. Our salutations and best wishes to The Waldorf Astoria!” 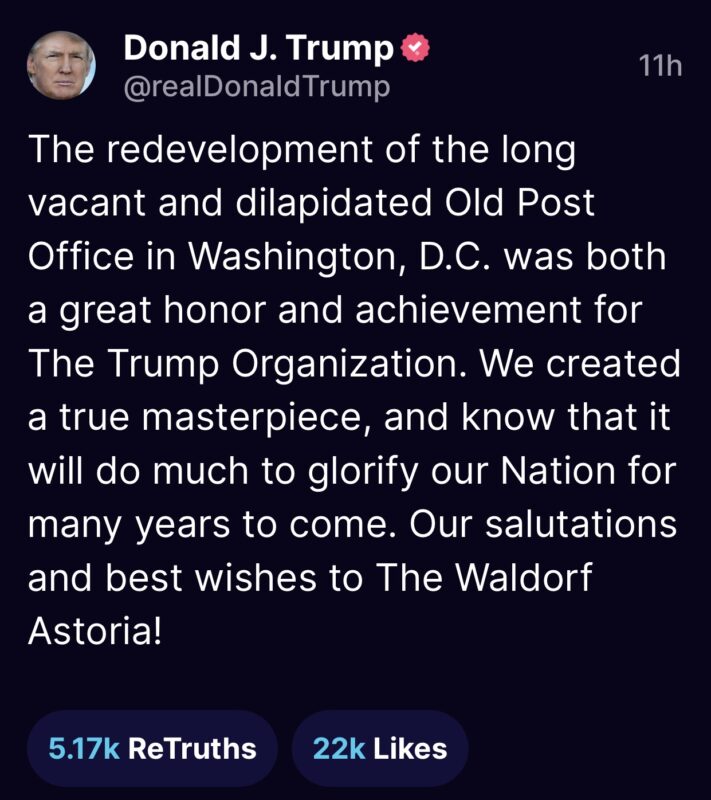 From the golden door signs to the linens and coasters, all Trump-branded items will be removed as part of the sale of the hotel.

“This acquisition marks a major milestone for CGI in our quest to rewrite the meaning of return on investment,” said Raoul Thomas, CEO and founder of CGI. “We are thrilled to partner with our friends at Hilton to bring the Waldorf Astoria brand to an iconic landmark in the nation’s capital and look forward to working closely together to have a lasting and positive impact on the Washington, D.C. community.”

Since the General Services Administration granted Trump the lease of the historic Old Post Office building in 2012, the company has occupied the building. For years, the former president’s relationship with the hotel has been the subject of inquiry and litigation.

Newsweek continued: “Trump opened the hotel in 2016 just a few weeks before he was elected president. During his time in the White House, the hotel was a focal point for Trump’s political world, used by diplomats, lobbyists, embassy staff and meetings for the former president and his family.”

Signs were being removed from the hotel as of last night.

It does look like the signs at the Trump hotel are going to be removed from the building later tonight. After it's dark out.

Pelosi Lets It Slip: Immigrants Should Be Picking Crops

Aconsortium of four private groups worked with the departments of Homeland Security (DHS) and...