Anytime Japanese Prime Minister Shinzo Abe and President Donald Trump got together, golf was always on the agenda.

President Trump flew south in Marine One on his four-day state visit to Japan in 2019 to play golf with the Japanese leader at a private country club.

Abe was Trump’s closest foreign policy friend. This was Abe’s fifth time playing golf with Trump since he took office. As U.S.-Japan trade tensions continued and North Korea posed a constant threat to both nations, Abe sought to keep his country in Trump’s good graces.

Video has emerged, showing what appears to be Japan's Prime Minister Shinzo Abe falling during a game of golf with President Trump. pic.twitter.com/i4TZHSAYzD

It was Abe who introduced Trump to sumo wrestling, a Japanese sport. In Tokyo, Trump watched the huge athletes compete in a championship match. It was his own “President’s Cup” trophy that he presented to the winner.

U.S. President Donald Trump said he had "a great day" playing golf and attending a sumo tournament as he and first lady Melania Trump joined Japan's PM Shinzo Abe and Mrs. Abe for dinner at a Tokyo restaurant where the food is served on long paddles. pic.twitter.com/0vdvyAr7Yo

The Denver Post reported at the time, “A motorcade of golf carts ferried Abe to meet Trump. They exchanged a warm handshake and patted each other on the forearms and posed for a throng of journalists. Abe wore white pants and a dark blue sport coat. Trump wore a red half-zip pullover with a white shirt and dark pants.”

Trump tweeted that he was “Going to play golf right now with @AbeShinzo. Japan loves the game. Tremendous fans of @JackNicklaus, @TigerWoods, and @PhilMickelson.” All three are famous American golfers. Trump said he asked about South African professional golf Gary Play and “they said we love Gary too!”

Abe told reporters as he left for the country club that Sunday’s weather was great for golf and “it seems we are in a good mood for sumo.”

Abe was as Japan-first as Trump is America-first. He was also very much an enemy of the Chinese Communist Party (CCP).

In February of this year, Abe said the U.S. needed to tell the CCP that it would defend Taiwan if China attacked.

In recent months, Abe had been a more outspoken critic of China. Earlier this year, he called on the United States to drop its long-standing practice of “strategic ambiguity” and give Taiwan assurances that it could count on American help in the event of an attack by China.

He also angered China by saying “a Taiwan contingency is a Japan contingency,” and noting that it would be impossible for Japan not to be sucked into a conflict over the self-governed island that Beijing considers a part of China.

The world was shocked today when it learned that Abe was assassinated during a campaign event.

The killer, an unemployed former member of Japan’s Maritime Self-Defense Force, used a homemade gun in the attack. NPR’s report added that he “attacked Abe because he believed he was associated with a group Yamagami hated. Multiple handmade guns were later found at Yamagami’s home.”

The moment that Japanese Former PM Shinzo Abe was shot. Looks to be a DIY shotgun. pic.twitter.com/sC0yzzfIob

Police say Tetsuya Yamagami, 41, fired two shots at Abe while making a political speech in the city of Nara. The first shot missed, but the second hit Abe’s chest and neck, and despite attempts to revive him he died several hours later.

A camera captured a close-up of the shooting.

Former Japanese Prime Minister Shinzo Abe has died, after he was shot on Friday in the western Japanese city of Nara.

The brazen attack has stunned the world, and sent shockwaves throughout Japan https://t.co/1SEMUknBtU pic.twitter.com/BJ6BFhZQDl

President Trump reacted after hearing of the shooting, and before Abe was pronounced dead.

The Washington Examiner reported “Former President Donald Trump offered his prayers to former Japanese Prime Minister Shinzo Abe and his family after he was shot while giving a speech in Japan.”

Trump’s statement was posted on his Truth Social platform on Friday. The relationship between the two world leaders emerged as one of the strongest bilateral friendships that Trump made during his presidency.

“Absolutely devastating news that former Prime Minister Shinzo Abe of Japan, a truly great man and leader, has been shot, and is in very serious condition. He was a true friend of mine and, much more importantly, America. This is a tremendous blow to the wonderful people of Japan, who loved and admired him so much. We are all praying for Shinzo and his beautiful family!” Trump wrote in a statement.

After it was announced that Abe had succumbed to his wounds, Trump posted a statement on Truth Social:

“Really BAD NEWS FOR THE WORLD! “Few people know what a great man and leader Shinzo Abe was, but history will teach them and be kind. He was a unifier like no other, but above all, he was a man who loved and cherished his magnificent country, Japan. Shinzo Abe will be greatly missed. There will never be another like him. President Donald J. Trump.” 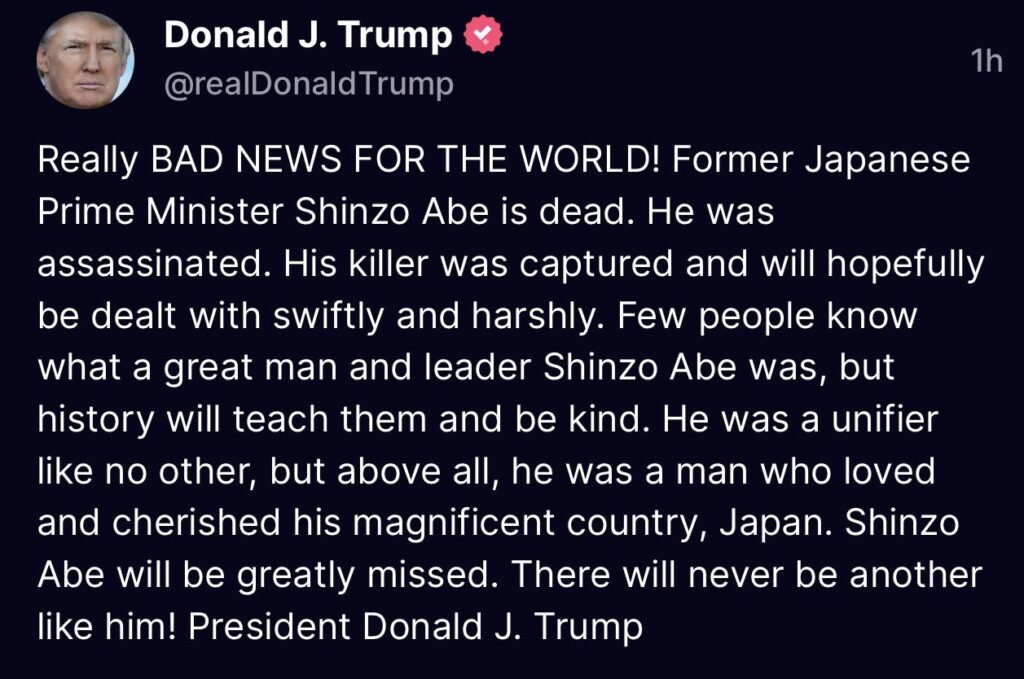 Politico reported on the close relationship that Abe and Trump had:

Abe, who resigned from office in September 2020 because of health problems, was among the foreign leaders who sought to cultivate a strong relationship with Trump and court the former U.S. president early in his tenure. The two men met in Trump Tower in New York in November 2016, while Trump was still president-elect.

In February 2017, Trump welcomed Abe to the White House and then to his Mar-a-Lago resort in Florida, where they played a round of golf and Trump used a gold-plated club Abe gifted him on their first meeting.

Trump traveled to Japan in November 2017 and visited the country again in May 2019, becoming the first foreign leader to meet the newly enthroned Emperor Naruhito. Trump also attended the G-20 summit in Japan in June 2019.

It’s a sad day for both Japan and for America that it lost an ally and fighter of the CCP.