When Covid-19 reared its head, former President Donald Trump was among those who tested positive for the virus.

As Trump was president at the time, he sought an immediate and powerful solution to the virus in order to stay working.

The drugs were all unproven at the time for the virus.

In true Trump style, after a short stay in the hospital due to the unproven nature of the treatment, he returned to the White House to continue working as much as possible.

Now the virus has, as all viruses do, mutated becoming weaker yet more contagious and treatments have become more mainstream.

President Joe Biden is nearing 80 and has had some physical setbacks.

Now he too has contracted the weaker form of Covid while in office.

Biden is fighting for approval from voters in addition to trying to stay healthy.

In a recent Gallup poll, Biden posted record numbers in terms of disapproval, drawing the worst rating ever for a president at this point in his term, going all the way back to when the poll began when WW II hero Dwight D. Eisenhower was in the White House.

And on top of that, he tested positive for Covid.

Coming out of the round with the virus, Biden spoke to reporters at a White House press conference in the Rose Garden on Thursday.

“When my predecessor got COVID, he had to get helicopter to Walter Reed Medical Center,” Biden said. “He was severely ill. Thankfully he recovered.”

“When I got COVID, I worked from upstairs of the White House and the offices upstairs for that five-day period,” he added, suggesting that he was tougher than Trump.

Biden: "When my predecessor got covid, he had to get helicoptered to Walter Reed Medical Center. He was severely ill… When I got Covid I worked from upstairs of the White House… The difference is vaccinations." pic.twitter.com/4QKo1JEfKU

Just as Biden thought he was out of the woods, another test sent the COVID-stricken POTUS to Twitter on Saturday where he broke the bad news to his 24.2 million followers.

“Folks, today I tested positive for COVID again,” he wrote. “This happens with a small minority of folks.”

“I’ve got no symptoms but I am going to isolate for the safety of everyone around me, he added. “I’m still at work, and will be back on the road soon.”

This happens with a small minority of folks.

I’ve got no symptoms but I am going to isolate for the safety of everyone around me.

I’m still at work, and will be back on the road soon.

Biden had again tested positive, nine days after the first time that he was diagnosed with the virus on July 21 and three days after he celebrated a negative test that sprung him from self-isolation on July 27.

Being confined him to the White House for the second time in less than two weeks earned Biden the sympathy of many who are sending the sidelined leader get well wishes, including his predecessor who dashed off a doozy of a sympathy note on Sunday.

In another of the epic bits of trolling that he has tormented his adversaries with, former President Donald J. Trump took to his Truth Social platform where he jabbed the twice-vaccinated and multiple-boosted Biden about his unfortunate affliction.

“Joe Biden’s second bout of Covid, sometimes referred to as the China Virus, was sadly misdiagnosed by his doctors.” Trump wrote. “He instead has Dementia, but is happily recovering well.”

“Joe is thinking of moving, part time, to one of those beautiful Wisconsin Nursing Homes, where almost 100% of the residents, miraculously, and for the first time in history, had the strength and energy to vote – even if those votes were cast illegally,” he added. “Get well soon, Joe!” 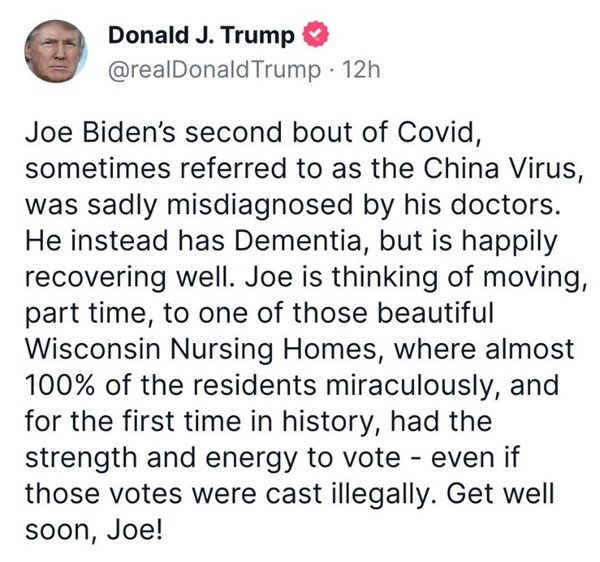 Trump skillfully packaged Biden’s affliction with the “China Virus” with the suggestion that he has dementia along with the idea that he lacks legitimacy as a result of an election that the ex-POTUS has continued to insist wasn’t on the up-and-up, despite the ongoing demands from Republican lawmakers that he shut up about it and move on.

Biden’s latest COVID diagnosis has been a fortuitous development for the embattled and deeply unpopular leader, generating sympathy from the media and serving as a distraction from the nation’s economic woes, not the least of which is a recession that is now official regardless of how much the White House and its allies try to change the definition, Biz Pac Review noted.

Considering all the physical and mental troubles that have plagued him, isolation and rest are not a bad idea for the afflicted president.

An added benefit for Democrats who increasingly see him as a liability is that it keeps him out of public where his mental misfires have been an ongoing nightmare for the party in a critical election year when they stand on the brink of losing their total control of the political system.

The results of having Covid twice, and the residual effects could gracefully allow Biden the exit so many are hoping for.