Democrats weaponized impeachment during the presidency of Donald Trump. They impeached Trump twice in the lower house on bogus charges.

Ten Republican traitors betrayed Trump and the American people as they joined socialist Democrats in the second impeachment vote.

Most of those ten are now finding out the price for going against the America First crowd.

Among the 10 Republicans who voted to impeach Trump after the Capitol riot on Jan. 6, four retired rather than run for reelection, a battle they would have likely lost. Those four are Rep. Anthony Gonzalez (R-Ohio), Rep. Adam Kinzinger(R-Ill.), Rep. Fred Upton (R-Mich.), and John Katko (R-N.Y.).

In June, Representative Tom Rice (R-S.C.), who voted to impeach Trump, lost his primary to Russell Fry, who is a Trump ally who says Rice “broke the trust” of his constituents.

An anti-Trump article on Yahoo states, “Rep. Jaime Herrera Beutler (R-Wash.), a moderate, was ousted last week by Joe Kent, a Trump-endorsed candidate. Herrera Beutler revealed early in 2021 that McCarthy had told her about his phone call with Trump on Jan. 6, during which McCarthy assured Trump that it was his own supporters ransacking the Capitol and not antifa.

“That’s when, according to McCarthy, the president said: ‘Well, Kevin, I guess these people are more upset about the election than you are,’” Herrera Beutler said in a February 2021 statement.

As a result of Liz Cheney’s defeat in her Republican congressional primary on Tuesday, eight of the 10 House Republicans who backed Trump’s second impeachment won’t be coming back to Congress.

Their departures, whether the result of voter pressure or retirement, indicate that Trump has retained and increased his hold over the Republican Party as he contemplates another presidential run in 2024.

In other words, it’s Trump’s party now. And he’s reveling in the victory.

The Washington Examiner reported that Trump is having a little fun with his winning.

Taking a break from his more serious slate of GOP nominations in the 2022 midterm cycle, Trump said he backs congressional candidate Dan Goldman and Rep. Carolyn Maloney in the state’s August primary, and he also complimented Rep. Jerry Nadler, who is vying for the same seat as Maloney.

“While it was my honor to beat him, and beat him badly, Dan Goldman has a wonderful future ahead,” Trump posted on Truth Social. “Goldman was the House Democrats’ lead counsel during the first impeachment of Trump” the Examiner reports. 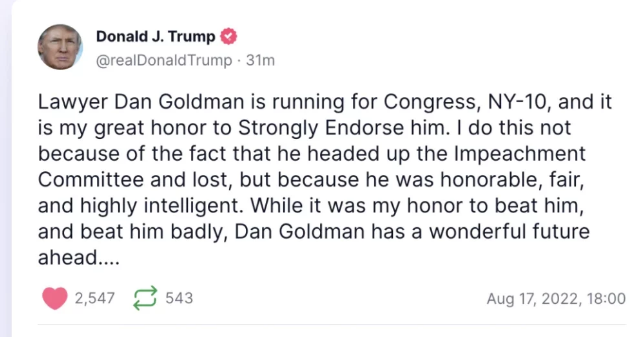 Of Maloney, the chairwoman of the Oversight Committee that is investigating vanishing Secret Service text messages around Jan. 6, Trump said, “She is a kind and wonderful person, who has always said terrific things about me, and will support me no matter what I do, just as I supported her very early on.”

In spite of the fact that he did not endorse Nadler, who also played a key role in the initial impeachment of the former president, Trump also said kind things about him.

Trump posted, “Jerry Nadler is likewise a hard driving man of the people, whose energy and attention to detail is unlike anyone else in Congress. He is high energy, sharp, quick-witted, and bright. You can’t go wrong with either, but Carolyn Maloney is the better man. She will lead our Country into a very GREEN and prosperous future. Carolyn has my Complete and Total Endorsement, she will never let our Conservative Movement down!” 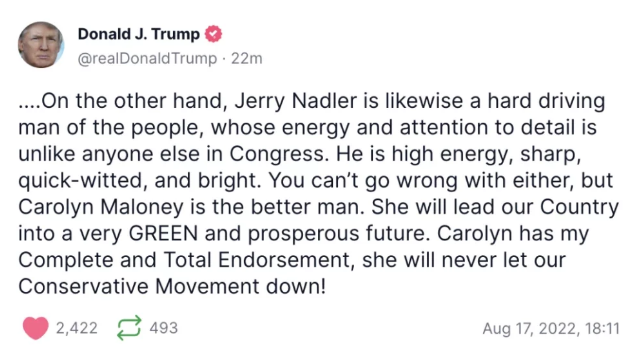 While Trump is basking in his victories, so-called journalists at liberal media outlets are lamenting them.

The fall of the three-term congresswoman, who has declared it her mission to ensure Donald Trump never returns to the Oval Office, was vividly foreshadowed earlier this year, on the first anniversary of the Jan. 6 attack on the Capitol.

As the House convened for a moment of silence, Cheney, who is leading the investigation into the insurrection as vice chair of the 1/6 committee, and her father, former Vice President Dick Cheney, stood almost alone on the Republican side of the House floor.

Democratic lawmakers streamed by to shake their hands. Republicans declined to join them.

“Liz Cheney represents the Republican Party as it used to be. … All of that is gone now,” said Geoff Kabaservice, vice president of political studies at the center-right Niskanen Center.

The report continues, stating “If Republicans gain control of the House and Senate in the November elections, the new Congress is destined to be remade in Trump’s image.”

And that would be far better than the traitor socialists who are running the country into the ground on purpose right now.